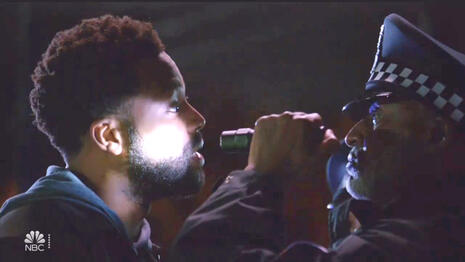 The eighth season of NBC’s Chicago P.D. began airing on November 11. From the beginning of the first episode, titled “Fighting Ghosts,” it is obvious that the groundwork is being laid for an ongoing conflict between police reformists and those who want to protect racist, corrupt cops.

Officer Kevin Atwater (LaRoyce Hawkins), an African American in the Intelligence Unit of Chicago P.D., is targeted by some fellow cops who are angry that last season he wrote up a report on a racist white cop’s shooting of a black man. The white cop ended up dead from the incident, too. Atwater’s report said that the white cop stopped a black man without just cause. So, the police who worked with the dead cop are determined to make Atwater pay for cracking the “Blue Wall” that says cops don’t snitch on each other.

A brick of heroin is planted in Atwater’s car by the revenge-seeking cops. Atwater finds the heroin, though, and disposes of it instead of reporting it. He tells his partner, Officer Adam Ruzek (Patrick John Flueger) that “Cops are still blue. I’m still black.”

On his way home that night, Atwater is pulled over by two cops – one black and one white. They tell him an anonymous tip has been received about drugs in his car. Clearly they are the ones meant to carry out revenge against him.

Talk Radio Show: She echoed the same thing I’ve heard over and over again: The George Floyd murder was the tipping point. I agree. We all saw that white cop with his knee on his neck. Plus all the other stuff going on. Again, the virus, the shutdown…

Atwater: What are you talking about?

Cop 1: Sir, you ran the stop sign. That’s the reason we pulled you over.

Atwater: No, I didn’t run a stop sign. I guess y’all just bored? Saw a brother driving a decent car, figured you pull his ass over, have some fun?

Cop 2: Hey, take it easy. My partner said he saw you run a stop sign. We had no idea if you were Black or white.

Atwater:  Look, I’m police. My name’s Kevin Atwater, badge number 52784. I work with the intelligence unit. Y’all can check whatever you want.

Atwater: I’m shutting the door. My hands are high. You see my star and my gun. If you look in my left pocket, you’ll find my id.

Cop 1: So what you a cop? I got an anonymous tip that a guy was selling drugs in this car.

Atwater: What are you talking about?

Cop 1: The guy sold a kilo of heroin to a dirty cop in a blue Dodge.

Atwater: You with Nolan’s crew? Well, search the car, Ron. Look wherever you want, but you ain’t gonna find a damn thing ’cause I already found the dope. It was in the trunk. Is this really what you wanna do, Black man?

After all of that, as Atwater parks his car in front of his house, he is ambushed by a group of men. He is left beaten in the street as they drive off.

This season looks as though it will be full of messages about police reform and breaking the Blue Wall of protection police have for each other. There is a new character who plays a deputy superintendent and delivers a speech to the press about police reform and the need for training on de-escalation techniques. That is a message we have heard since the death of George Floyd last summer as well as one that says Hollywood has to change its depictions of police as the good guys. It looks like Chicago P.D. will be doing its part by portraying cops as corrupt and racist this season.

Sponsors of this show include Hyundai, State Farm, and Tide. Let them know if you don’t agree with portraying the police as racists and always the ones in the wrong.