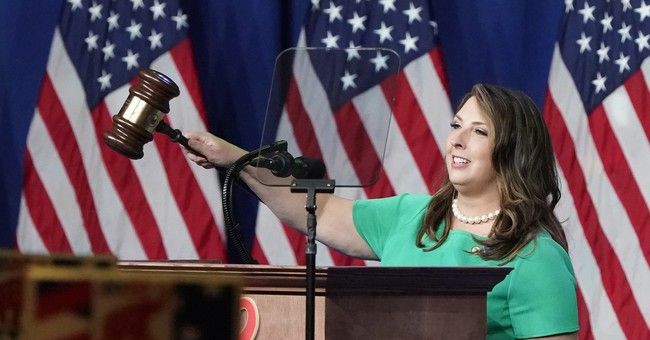 The dumbest thing about this is that her message here is *effective* for the Georgia runoff. Republicans are going to go to the polls in January with three different motivations. One is to “prove” that Biden’s victory in the state was a fluke, that the GOP still owns Georgia. Two is to send Trump out of office as a winner. But three, the most important by far, is making sure Republicans have the numbers for a Senate majority, to check Biden and Harris.

Many Republican voters in GA will grasp that message even if the RNC can’t stand foursquare behind it because humoring the president about his prospects for a second term remains the party’s highest priority. But Loeffler, Perdue, and the RNC would love, love, love to be explicit about it and hammer home to low-propensity voters that total Democratic control of government is on the line here.

They’re hamstringing themselves because Trump’s ego won’t allow them to embrace their most compelling campaign pitch.

“Deciding Vote Kamala Harris.” Those are the stakes on January 5. And the party has to pretend that they aren’t.

Luckily for them, Democrats are going to spend enough time hammering the need to make Harris the 51st vote in the Senate that low-propensity Republicans should absorb that message as well. We’re going to end up with a “Schrodinger’s election” for the GOP in Georgia, in which the idea of a Democratic VP breaking Senate ties both is and isn’t something Republicans are officially very worried about.

McDaniel had a bottom-line reason too to delete her tweet. I think Trump’s attempt to hold onto power is more serious than most other commentators seem to, but there’s no question that to some extent the effort is a grift:

[A]ny small-dollar donations from Trump’s grassroots donors won’t be going to legal expenses at all, according to a Reuters review of the legal language in the solicitations.

A donor would have to give more than $8,000 before any money goes to the “recount account” established to finance election challenges, including recounts and lawsuits over alleged improprieties, the fundraising disclosures show…

A large portion of the money goes to “Save America,” a Trump leadership PAC, or political action committee, set up on Monday, and the Republican National Committee (RNC). Under Federal Election Commission rules, both groups have broad leeway in how they can use the funds.

They’re shaking down Trump’s donors for money that they want to use for the Georgia races with the pretense that it’ll be used for Trump’s “stop the steal” operation or whatever. No wonder McDaniel decided that acknowledging the likelihood of a President Harris was unhelpful.

Although, again, a straightforward “we lost the presidency and we’re about to lose total control of government if we don’t win in Georgia” fundraising pitch logically would seem more lucrative. Maybe not in the world that the GOP has now created for itself, where any frank admission of defeat would qualify as treason and warrant cutting off the traitor financially. But in a sane world, “Block Biden and Harris!” is the obvious sales message.

There are news reports circulating this evening that suggest the White House is becoming more realistic about its legal prospects.

Allies caution that no final decision has been made on where Trump intends to take this fight or when it might end. And a small group of senior advisers — most of them in the Trump campaign — still believe there is a path to victory for the president.

But those allies are a shrinking minority, and some advisers say the president is coming around to the fact that the election result won’t be reversed. “Even Trump realizes that the likelihood of the result changing is almost zero,” one of them said.

There’s an effort among those allies who know that Trump has lost to get the president to focus on next steps. “Overwhelmingly, the understanding is getting into the president’s ear that he needs to have a strategy to move on,” one aide said…

“There’s a sense that if he goes out and does anything forcefully, that’s the one way he risks losing Republican support,” one of the president’s allies said. “And that’s when the whole house of cards comes tumbling down.”

I’ll believe it when I see it. But this AP story also claims that Trump’s inner circle is gradually coming around to the idea of a transition, alleging “a growing recognition among most [staffers] that the election is lost and the building will be vacated by Jan. 20.” Trump himself is supposedly “calmer than his tweets suggest” and views the legal battle as a form of fan service to some degree, to live up to his image as a fighter. Ivanka has supposedly spoken to him about an “endgame” and Trump himself has chattered about running again in 2024. The fact that he launched a PAC this week is probably the strongest sign yet that he’s coming around to the idea of leaving. A president doesn’t need a PAC to exert control over his party. An ex-president does.

I find it also of note that James Lankford, who’s from deep red Oklahoma and is up for reelection in just two years, told a local radio station this afternoon that it’s “likely” Biden has won and that if the administration isn’t giving him intelligence briefings by Friday then Lankford himself will get involved to facilitate it. I’ll believe that when I see it too, as having Republican senators put pressure on Trump to begin the formal transition process would be an important signal to the president that they’re not willing to back him on everything. Just in case he’s thinking about asking state legislatures to invalidate their own election results.

In the end, Trump’s Achilles heel in the “I was cheated!” gambit will end up being local Republican officials like Arizona AG Mark Brnovich, who affirmed today that he’s seen no evidence of widespread fraud. Georgia secretary of state Brad Raffensperger is another example, as he acknowledged on Monday that it’s “unlikely” that there’ll be any evidence of fraud in Georgia sufficient to justify overturning an election in which Biden leads by more than 10,000 votes. Why these local officials are willing to defy Trump when more powerful Republicans like Mitch McConnell aren’t is an interesting question. Maybe they’re far enough removed from Washington that they feel their loyalty is owed more to the polling officials who work under them and to the voters of their state than it is to Trump. Whatever the explanation, it’s harder to claim you were cheated when people from your own party who are policing the integrity of the election are insisting that you weren’t.

We may yet avoid the country-destroying scenario where state legislatures start invalidating their own residents’ votes and awarding Trump their electors on an inch-thin pretense of fraud. But if we do, it’ll only be because Biden ended up winning just enough states by just enough votes to force Trump to claim that fraud was happening all over the map, which is too far-fetched for everyone but true believers. If he had eked out wins in Arizona and Georgia, we really would be facing a nightmare in which the entire election came down to Pennsylvania, with the Republican legislature under immense pressure from its own base to perpetrate a coup on Trump’s behalf. It’s hard to believe in a year as miserable as 2020 that we’re going to be spared that misery, but it appears we are.

Or are we? I’ll leave you with this.

Nobody wants to report that Pennsylvania and Michigan didn’t allow our Poll Watchers and/or Vote Observers to Watch or Observe. This is responsible for hundreds of thousands of votes that should not be allowed to count. Therefore, I easily win both states. Report the News!