Tuesday I wrote about NY Times’ polling guru Nate Cohn’s take on the 2020 polling. He suggested it may, when all is said and done, turn out to be a worse miss than 2016. Today the Times published another piece by reporter Daivd Leonhardt which doesn’t quite go that far but nevertheless concludes the miss this time out was “alarming.”

For the second straight presidential election, the polling industry missed the mark. The miss was not as blatant as in 2016, when polls suggested Mr. Trump would lose, nor was the miss as large as it appeared it might be on election night. Once all the votes are counted, the polls will have correctly pointed to the winner of the presidential campaign in 48 states — all but Florida and North Carolina — and correctly signaled that Mr. Biden would win.

But this year’s problems are still alarming, both to people inside the industry and to the millions of Americans who follow presidential polls with a passion once reserved for stock prices, sports scores and lottery numbers…

“This was a bad year for polling,” David Shor, a data scientist who advises Democratic campaigns, said. Douglas Rivers, the chief scientist of YouGov, a global polling firm, said, “We’re obviously going to have a black eye on this.”

To illustrate the failure of polling this year the Times created this table comparing final polls before the election to estimates of what the final results will show once all the votes have been counted. 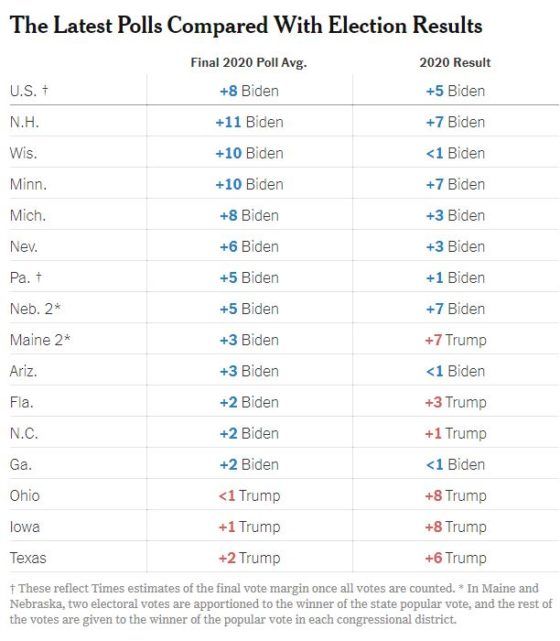 If you subtracted 3 points from every poll about half of them would be within a point of the final result (almost all of them still overestimating Biden). But 3 points really wouldn’t help you at all in Wisconsin or Ohio or Iowa. The polling in these states was miles off. The bad polling had real world consequences:

The Trump campaign pulled back from campaigning in Michigan and Wisconsin, reducing visits and advertising, and lost both only narrowly. In Arizona, a Republican strategist who worked on Senator Martha McSally’s re-election campaign said that public polling showing her far behind “probably cost us $4 or $5 million” in donations. Ms. McSally lost to Mark Kelly by less than three percentage points.

Mr. Biden spent valuable time visiting Iowa and Ohio in the campaign’s final days, only to lose both soundly. Democrats also poured money into races that may never have been winnable, like the South Carolina Senate race, while paying less attention to some of their House incumbents who party leaders wrongly thought were safe. The party ended up losing seats.

That’s the real impact the polling had on the campaigns but the best part of the piece comes where Leonhardt speaks to the narrative that pollsters and the media helped to generate.

By the final weeks of this year’s campaign, the polls seemed to be telling a clear story: Mr. Biden had led Mr. Trump by a significant margin for the entire race, and the lead had widened since the summer. Some combination of the coronavirus, Mr. Trump’s reaction to police brutality and his erratic behavior at the first debate had put Mr. Biden within reach of the most lopsided presidential win since Ronald Reagan’s in 1984.

In the campaign’s final 10 days, a Wall Street Journal/NBC News poll showed Mr. Biden up by 10 percentage points nationwide, as did a YouGov poll. Fox News put the lead at eight points, and CNN at 12. Other polls also showed the lead to be at least eight points.

In Wisconsin, which Mr. Trump had won narrowly in 2016, a YouGov poll found Mr. Biden up by nine percentage points. A New York Times/Siena College poll showed the lead was 11 points, while Morning Consult said 13 points. A Washington Post/ABC News poll reported the lead was 17 points. In congressional races, the Cook Political Report called the Democrats clear favorites to retake the Senate and gain seats in the House.

After laying out this accurate and devastating case that pollsters and the media presenting a blue wave for Biden as a fait accompli, Leonhardt drifts away from the obvious follow up question: What impact did this have on voters? Instead he spends the rest of the piece discussing why the polls were wrong and what might help to fix it.

No doubt that’s a worthy discussion to have but the first step should be an admission that the bad polling impacted voters even as it impacted campaigns. Telling Republicans they are doomed for months on end must have had some impact but it seems no one wants to talk about that. The most we get in this piece are a couple of paragraph, one near the beginning and one near the end, which indicating the Times is reevaluating its future use of polling:

…media organizations including The New York Times, which financially support and promote polls, are re-evaluating how they portray polls in future coverage. Some editors believe the best approach may be to give them less prominent coverage, despite intense interest from readers and despite the dominant role polls play in shaping campaign strategies…

A separate set of changes may involve how the media present polling and whether publications spend as much money on it in the future. “The media that sponsor polls should demand better results because their reputations are on the line,” James A. Baker III, the former secretary of state, wrote in The Wall Street Journal this week.

That’s worthwhile but it’s curious to me that Leonhardt never really spells out why. What we get in this lengthy story is this:

This story skipped over the most important part. And yet you can sort of read between the lines from point 3 and see that there is some concern this is unfair and can’t be repeated.

Again, I’m not suggesting we can know for sure what the impact on voters or the results was in a definite sense. I’m certainly not saying it swung the election. But I don’t see how you can look at the tight results and assume it didn’t matter. It’s very weird to set the table with a discussion of the misleading narrative the media created and never follow through on that.

The media wants to turn this into a largely technical question about why the polls were wrong but that’s the pollsters problem. The really important question isn’t why it happened it’s how much the failure impacted the results. In this case, Leonhardt walked right up to the edge of that question and then walks away. He’s a reporter so I don’t expect him to offer his personal opinion but he could have found someone with an opinion to at least raise the question as the most important one to talk about.