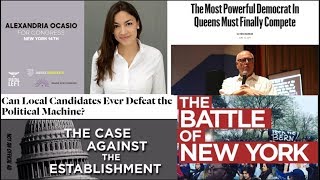 A Video depicting the progressive and justice democrat and brand new congress Alexandria and her amazing qualities to run New York’s 14th District. And showing the Faults of the corporate Democrat Joseph Crowley
Before Crowley can get on with his ladder climbing, he needs to do something somewhat unfamiliar: run a campaign. For the first time since at least 2004, he will be forced to compete in a primary in the overwhelmingly Democratic district spanning northern Queens and a chunk of the eastern Bronx. Since Republican victories are all but impossible, the primary is where the action is — and where Alexandria Ocasio-Cortez, a 27-year-old former organizer for the Bernie Sanders campaign, hopes to pull off her historic upset.
“What Joe Crowley represents is the floodgate between Wall Street and the United States government. He’s the clearing house, he takes millions and millions of dollars in funding from them,” Ocasio-Cortez told the Voice. “We see how he’s come to power locally — it’s totally undemocratic, machine-run, dynastic. He’s trying to spread this same model on the federal level.”
Ocasio-Cortez, attacking Crowley from the left, is just one of about a dozen candidates running on the slate of Brand New Congress, a political action committee founded by former Sanders staffers to elect more progressive members of Congress. She is the only member of Brand New Congress running from New York. A resident of the Bronx neighborhood of Parkchester, Ocasio-Cortez organized Sanders’s campaign in the South Bronx — Hillary Clinton, heavily favored in New York City, won the Bronx handily — and started thinking seriously about running for Congress after Donald Trump’s election. She learned quickly that people usually didn’t even contemplate running against Crowley, let alone start an actual campaign.

“A lot of progressive groups are coming out of the woodwork. They’ve been trying to find a challenger to Crowley for years,” Ocasio-Cortez said. “It’s literally political suicide for anyone with a semblance of a political career.”

While the Sanders wing of the party has derided much of the Democratic establishment as too beholden to the status quo, it’s hard to find a congressman more representative of that establishment than Crowley. The Blackstone Group is his second most prolific donor. Bank of America, Verizon, and Tishman Speyer, the powerful New York real estate developer, round out the top twenty. He was an unflinching Hillary Clinton ally. Like many in his party, he supported the Iraq War and the Patriot Act. (His campaign argues that his donor list aligns with that of many other liberal Democrats, including Pelosi.)

Ocasio-Cortez’s platform — built around campaign finance reform, renewable energy investment, and massive infrastructure spending amounting to a “new” New Deal —
Where Ocasio-Cortez and others can find much greater fault is in Crowley’s backyard, where his county machine keeps a tight grip on power and enriches his bosom buddies at the expense of everyone else. The day-to-day operations of the Queens party have remained in the hands of a trio of Crowley- and Manton-aligned lawyers for three decades.

These men — Gerard Sweeney, Michael Reich, and Frank Bolz — have a law firm that has earned millions in Surrogate’s Court, where the estates of people who die without wills are processed, and from representing banks foreclosing on people’s homes. The judicial system in Queens is effectively under Crowley’s control, since no one becomes a judge or receives a court appointment without staying in the county organization’s good graces. A scandal cloud now looms: Scott Kaufman, Crowley’s campaign treasurer, is facing a state probe for possible violations of court rules regarding lucrative appointments he received.

It was the profit Sweeney, Reich, and Bolz made off the foreclosure crisis that particularly galled Ocasio-Cortez, who lost her father to cancer at a young age. “My mom was running a single-parent household,” she said. “She was cleaning homes, driving buses, and in the wake of the financial crisis and losing my father, we were on the brink of losing our home to foreclosure.”