The Americans Who Politicized the Bible 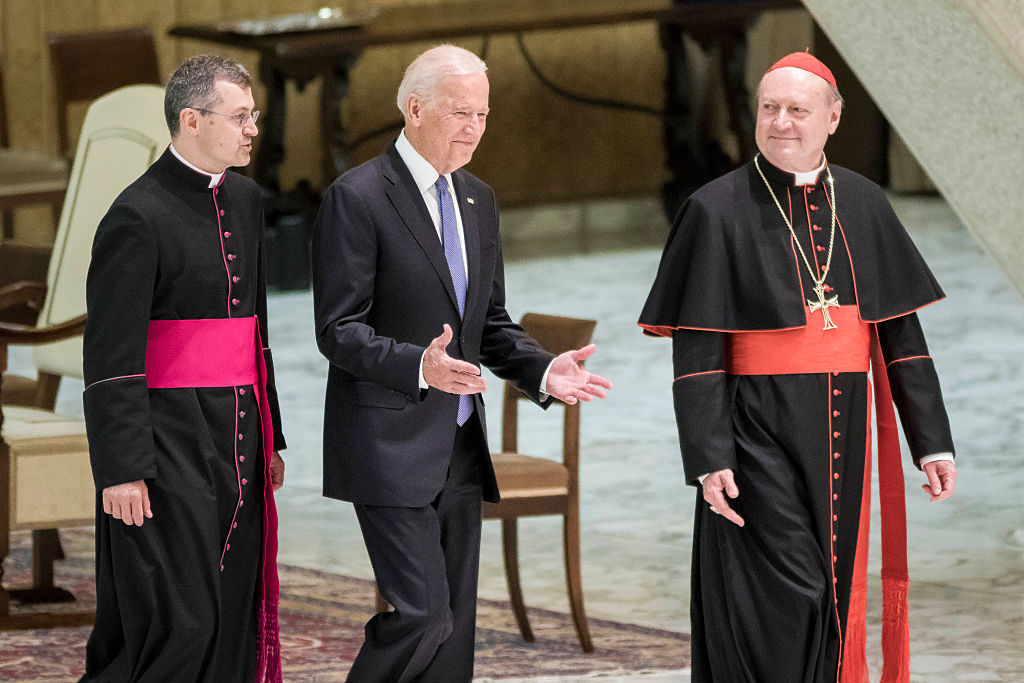 Both Republicans and Democrats have done it, swimming in a current that stretches far back in history.

US Vice President Joe Biden (C) is flanked by Cardinal Gianfranco Ravasi (R) as he arrives to attend a special audience celebrates by Pope Francis with participants at a congress on the progress of regenerative medicine and its cultural impact in the Paul VI hall in Vatican City, Vatican on April 29, 2016. (Photo by Giuseppe Ciccia/NurPhoto via Getty Images)

Faith, and particularly Catholicism, played a prominent role in Joe Biden’s presidential campaign, which culminated in an election victory speech in which Biden quoted from Ecclesiastes and the saccharine 1970s Catholic hymn “On Eagle’s Wings.” The August Democratic National Convention that selected Biden as its presidential candidate in turn featured a panoply of paeans to Biden’s Catholic faith. Former Ohio governor John Kasich, former first lady Michelle Obama, House Speaker Nancy Pelosi, and former president Barack Obama all characterized Biden’s religious beliefs as a motivation and guide for his political career. One suspects they are not talking about his submission to the Nicene Creed.

Rather, as both the Democratic Party and liberal legacy media have constantly reminded us, Biden is a “decent” man who will provide “comfort and solace” to an American nation suffering through a pandemic, economic crisis, and heightened racial tensions. His Catholic faith, we are told, influences his opinions on core Democratic Party policies such as sustainable energy, welcoming immigrants, improving racial equity, and curbing gun violence. However, they also assure us, that same Catholic faith does not influence his position on abortion, sexuality, or religious liberty. In other words, Catholicism has been exploited as a tool of statecraft: essential to Biden’s politics when politically advantageous and discarded when it is not.

Of course, the selective appropriation of the Christian religion for secular political gain is nothing new. Indeed, as scholars Scott Hahn and Jeffrey Morrow argue in their recent book Modern Biblical Criticism as a Tool of Statecraft (1700-1900)—a sequel to Hahn’s and Benjamin Wiker’s Politicizing the Bible (covering 1300-1700)—this is part of a larger program by the state to wrest control of biblical interpretation and theology from ecclesial authorities. Indeed, what began in the Late Medieval Period as a call for reform to combat ecclesial corruption was soon craftily exploited by secular governments to consolidate and build their own political power.

Hahn’s and Morrow’s story focuses primarily on developments in the English and German Enlightenment and post-Enlightenment period, though it’s worth briefly considering a few salient points from the first volume. Beginning in the 13th and 14th centuries, figures like Marsilius of Padua, William of Ockham, and John Wycliffe began urging secular authorities to exercise power over ecclesial authorities. Such men even suggested that governments give biblical “experts” authority that would supersede that of popes and councils.

This proto-Erastianism was further endorsed by Martin Luther, who called upon the German nobility to save the German church from a distant and corrupt Roman papacy. In England, meanwhile, the court of Henry VIII, influenced by Marsilius, Wycliffe, and Luther, used Protestant reforms as an excuse to consolidate royal authority, dissolving monasteries, seizing church land, and declaring the crown head of the English church. The post-Reformation era in turn witnessed further consolidation of secular power over the church, as secular authorities gladly accepted new roles as guardians and patrons of state churches, each replacing the hierarchical church as the sine qua non unifying principle of Christendom.

A further development occurred when German universities in the 18th century came under the patronage of the state. Under this model, the academy, including those studying the Bible and theology, became extensions of the state and its own secular agenda. Scholars increasingly felt compelled to tacitly—or explicitly—support the nation-states that their universities served. As the post-Enlightenment academy became more aggressively secular and suspicious of traditional Christian teaching and the Catholic Church, theology and biblical scholarship were employed to provide a secular history of the world and Scripture better aligned with narratives that served the regime’s interests and ambitions.

Biblical scholar Johann Salomo Semler (1725-1791), for example, supported the legal right of the Prussian state to define doctrine. German Protestant scholars and clergy like Julius Wellhausen (1844-1918) and Heinrich Holtzmann (1832-1910) in turn supported Otto von Bismarck’s Kulturkampf movement in the 1870s Prussian Empire to exert control over the Catholic Church, including its clergy, property, and educational institutions. By the end of that decade, 1,800 Catholic priests had been either incarcerated or exiled, and about 16 million marks’ worth of Catholic church property had been seized by the state. One sees in the German academy’s support for Kulturkampf a foreshadowing of the same complicity manifested by many intellectuals and academics in 1930s and 1940s Nazi Germany.

The secularization process in biblical scholarship sought to retain a shell of religiosity in its belief that piety was still useful for inculcating civic virtue. Yet the concurrent effort to “demythologize” the Bible and interpret it solely as a work of historical fiction fostered a further privatization of religious commitments, neutralizing the influence of beliefs deemed problematic to the state’s domination of the public square. What remained of “faith” were only generic exhortations to be good, such as Kant’s categorical imperative. And in that, we can see its fruits in the diluted “nice guy” Catholicism of Joe Biden that is acceptable, even exploitable, by the Democratic Party.

The contemporary political co-opting of Christianity provides a useful cover to pursue policies that dictate to religious communities what they can and cannot believe. Adoption agencies that refuse to place children with LGBTQ parents, organizations that refuse to provide contraceptive coverage to their employees, and educational institutions that don’t subscribe to woke ideology provide recent examples of what “unacceptable” beliefs require state intervention and coercion. In effect, ruling parties can act as pseudo-magisteria, defining what counts as acceptable religious belief and practice in society and using coercive state authority to punish dissent.

Of course, it’s not as if the Democrats have a monopoly on the manipulation of religious belief for political gain. See, for example, the June 1 decision by President Trump to follow the dispersal of unruly protesters with a photo-op holding a Bible outside the historic St. John’s Episcopal Church. This from a man who has spent more time studying the female body than the Good Book (his favorite book of the Bible, he once declared, is “Two Corinthians”).

With such contemporary examples, it’s clear the prolific scholar Scott Hahn still has work to do—this latest book only brings us to the beginning of the 20th century. A volume discussing how this co-opting of religious scholarship plays out in an American context, for example, would be most welcome. Indeed, as the first two decades of the 21st century demonstrate, there is plenty of material to make this “politicizing the Bible” series into a trilogy.