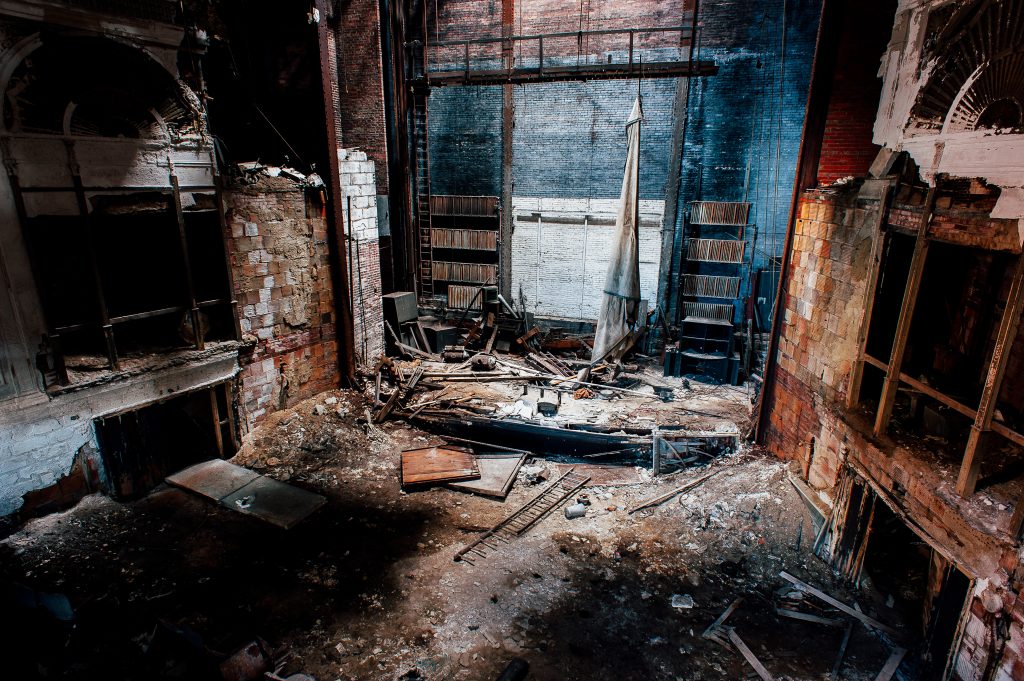 In 1997, Harvard professor of government James Q. Wilson gave a speech to the American Enterprise Institute and laid out what he saw happening in America: the emergence of “two nations.” In her essential 2018 essay “Two Nations, Revisited,” Mary Eberstadt observed that Wilson’s sociological argument had been borne out over the following decades and that America has broken in two, with the division “no longer one of income or social class. Instead, it [has] become all about the family—specifically, whether one hailed from a broken or intact home.” As the familial foundation collapses, Wilson noted, “every structure built upon that foundation has become weaker.”

In his powerful new documentaryAmerica Lost, director Christopher Rufo journeys through the America Wilson and Eberstadt described and records the experiences of Americans that few ever see or consider. He examines what life is like in three “forgotten American cities”—Youngstown, Ohio; Memphis, Tennessee; and Stockton, California. All three cities have distinctly different histories, and yet the collapse of each has resulted in a nearly identical reality on the ground. Rufo’s film is a record of excruciating poverty, family breakdown, addiction, mental illness, and—undergirding all of it—a crushing loss of meaning that afflicts those trapped in these shattered human ecosystems.

Fifty years ago, Youngstown was part of America’s great industrial heartland, with 25 miles of steel mills powered by men who left high school, went to work, and heaved their families into the middle class through sweat and elbow grease. They had jobs, they had dignity, and they provided for those they loved. It took a century to make Youngstown wealthy, and less than a generation for everything to implode. Today, Rufo explains, it is the poorest city in America, one of only six with a poverty rate higher than 40%. When the steel mills shut down, 40,000 manufacturing jobs vanished. More than half of the population followed. There are 8,000 empty houses in Youngstown. Every year, vandals burn down more than 200 buildings. The fire department watches them burn. The old order is gone, Rufo says. Nothing has replaced it.

Rufo seeks out those who stayed behind. Todd, a bearded metal scrapper who scavenges through abandoned houses for overlooked debris to cash in at the scrap yard, says that Youngstown now resembles a third-world country. “In the past, you had a lot of really proud people who lived here. They believed in what they did, they believed in their friends, neighbors, and family. Now, I don’t believe any of that exists anymore. Fight or flight—a lot of people flighted out of here.” Todd has struggled with addiction, been arrested, and left his family. He scrabbles on, trying to survive in a landscape that often more closely resembles Berlin in 1945 or Aleppo in 2016 than the American Midwest most people know. When the industries collapsed, Rufo says, not everyone made it. Todd, and so many others, are the collateral damage of policies that destroyed the lives of American workers. Cities like Youngstown simply failed to make the transition from the modern to the postmodern world.

Presidents have trekked here for decades to make promises—Clinton, Bush, Obama—but nothing has stopped the disintegration. The top 10% of the population are the bureaucracy administering social programs; the bottom 50% are on public assistance or disability, or are incarcerated. In one area, 41% of the men are unemployed and 69% of the families are headed by a single mother. Jennifer, who grew up in Youngstown in the ‘80s and ‘90s, tells Rufo that poverty is “a really mean disease that just creeps and consumes.” She had her daughter Nikki at the age of 15. Nikki just graduated high school and wants to leave, but Jennifer—a bartender who regularly sells pints of blood to make ends meet—wants to stay. It is a stark choice: stay with those last fragments of community, friends, and family—or pack up and leave forever.

The economic heart of Youngstown has collapsed, but so has the spiritual soul. The churches are broken and empty. Faith is gone; work is gone; family is falling apart. Can they leave? Perhaps. The agony of that choice was articulated by Tucker Carlson in a conversation with Ben Shapiro in 2018. Perhaps, Shapiro suggested, the ghosts haunting these dying cities should simply pack up and head out, recapturing the spirit of pioneer America on the move. Sure, Carlson replied sarcastically, it is easy to abandon the last shadows of communities and the graves of your parents and grandparents. It might be the right thing to do—those Rufo speaks with admit that. But it is hard—and of course, there is the fact that any real estate they own is worthless. They would be leaving with nothing but their memories.

In Memphis, Tennessee, the details differ but the story is the same. After World War II, tens of thousands of African Americans fled the racism of the Mississippi delta to settle in “the city of churches.” Despite Jim Crow, 90% of black men held down jobs. It was a booming industrial city. Now, the crime rate is crippling, 45% are unemployed, 77% of children are born to single moms, and more than 21,000 men have vanished into the prisons or an early grave. In the 38126 zip code of South Memphis, 78% of families are on public assistance, 20% of working age men are employed full-time throughout the year, 93% of families are headed by single mothers, and out of 6,000 residents, there are only ten nuclear families. The federal government has poured billions into anti-poverty programs in Memphis. Nothing works. “In Memphis,” one resident tells Rufo, “if you’re poor, you’re poor.”

Houses regularly burn down here, too. Gangs rule the streets. One man tells Rufo that he started selling crack at 15, and has already been to the federal pen twice, state prison once. “My momma raised three boys. Both of my brothers were killed.” This in peacetime USA. Jailtime is often generational. One mom with two daughters (from two fathers) says that her father went to jail, as did the fathers of her two girls. The epidemic of fatherlessness breeds intergenerational dysfunction. There are no fathers to teach their sons how to live and work, and gangs replace the need for male leadership. Single moms desperately try to scrape together enough money to support their babies, and the bureaucracy can only meet the barest survival needs. If they fall, there is no social safety net—and it is short drop to despair. “I just want better,” the mom of two girls tells Rufo. “That’s it.”

Stockton, California is the largest American city to go bankrupt. Half a century ago, Stockton welcomed impoverished people from around the world and put them on the path to the middle class. Now, it is a post-industrial city. Jobs have mechanized. A quarter each black, white, Latino, and Asian, it is a city of multicultural misery. In some housing complexes, 100% of children are born to single mothers. Hundreds inhabit tent cities. Drug addiction is common. There is no meaning in these 21st century shantytowns, and drugs provide a brief shot of heaven in a hellish existence. The working man who supports his family “is a relic of the past.” Many of the young men go feral. They’ve been stabbed, witnessed shootings, shot people themselves. The heavily tattooed gangbangers often resemble living corpses covered in human graffiti, playing out their roles in street warfare, believing that this is all there is.

“The problem,” Rufo says, “is that both political parties have treated human beings as functions in a math problem.” Politicians cut spending, boost spending, but billions later, little has changed. When culture, community, and family are in tatters, bureaucracy is helpless. The only success Rufo can see is that of the faithful pastors who walk the streets, sharing their testimonies of divine rescue from lives of drugs and crime. A Christian recovery home for men, he notes with amazement, has an incredible 70% success rate turning addicts and criminals into men with purpose and a future. “People who come to our church are in need of a miracle,” one pastor tells Rufo, and he represents a God who can perform them.

These pastors go beyond mere economic circumstances and speak to the heart of the human condition. His journalism, Rufo says, has convinced him that top-down change does not work. The necessary change is from the inside out. Individual hearts. Families. Communities. A new foundation for a fractured, postmodern world. “It’s deep, human-to-human work, but it’s the only way,” he observes. Being poor must not mean being disconnected from the primary sources of human happiness—and with those connections, rebirth and revitalization frequently follow.

Rufo provides one powerful example in the story of a young man named Mike. He’d served time but married the girl who bore his daughter. Each day, he sees his beautiful wife and his adorable daughter, and again strives to do better. He resists the powerful pull of the streets; he hunts for work; he promises them, and himself, that he will provide for them. His wife gives birth to a son, and Michael sobs to the camera. “If I didn’t have a family, I wouldn’t be alive right now,” he says. “The only thing that keeps my heart beating, from giving up, is knowing that I have a reason why. They give me a purpose, the thing I’ve been looking for my whole life. It’s a miracle.” He gazes at his son. This little boy is going to be fine, he tells Rufo, because we love him. A soft, tiny hand grasps a tattooed finger and clings tight, and the camera captures the moment the cycle is broken.

Christopher Rufo, who also leads the Discovery Institute’s Center on Wealth, Poverty, and Morality, has provided an invaluable window into the America that has been left behind. He details how the churches and civic associations that once shaped young men have collapsed, resulting in a vicious intergenerational cycle of fatherlessness, unemployment, addiction, and incarceration. Without understanding the state of the American family, we cannot understand American poverty. This is hardly a unique observation, but rarely is it accompanied by the mauling visuals and gut-wrenching stories that Rufo explores. Rufo’s film does not propose easy solutions or political policies, and the human messiness of the broken communities he covers warn against attempting them.

One observation stands out. “I didn’t set out to tell a story of religion, but the reality is that faith-based organizations are still the cornerstone of poor communities,” Rufo says. “Inner-city churches are often the only institutions that offer a clear sense of meaning, purpose, and community.” The new path to prosperity must emulate the old path to prosperity, and it is a both simple and excruciatingly difficult road to renewal: A father, a mother, and their children, undergirded by the faith and values that made America great—and can do so again.

Jonathon Van Maren is a public speaker, writer, and pro-life activist. His commentary has appeared in National Review, The European Conservative, the National Post, and elsewhere. Jonathon is the author of The Culture War and Seeing Is Believing: Why Our Culture Must Face the Victims of Abortion as well as the co-author with Blaise Alleyne of A Guide to Discussing Assisted Suicide.