Even more Warnock: Nobody can serve both God and the military 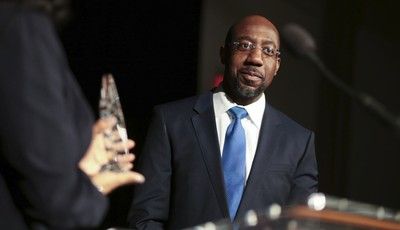 Georgia Democratic Senate candidate Raphael Warnock continues to be the gift that keeps on giving… at least for Republicans. The runoff election between Republican Senator Kelly Loeffler and the Pastor was supposed to be one that Georgia Democrats could turn into a competitive battle in a traditionally red state. And they still might if they can maintain the high turnout rates and enthusiasm seen in the general election. That’s a mighty big “if,” however, and their cause isn’t being helped any by the ghosts of Warnock’s past that keep popping out of his closet.

The latest example comes from yet another of Warnock’s recorded sermons, of which there seem to be thousands. This one comes to us from 2011, given at Ebenezer Baptist Church in Atlanta. For some reason, Warnock goes off on a bit of a tirade about how it’s impossible for anyone to “serve God and the military.” Given the massive military presence in Georgia, that may not sit well with a lot of families around the state. (Free Beacon)

The newly unearthed comments threaten to complicate Warnock’s candidacy in a tight Georgia Senate race: Georgia is home to the fifth largest active duty military population in the country, according to a 2018 Department of Defense report.

“America, nobody can serve God and the military,” Warnock said in the sermon delivered at Ebenezer Baptist Church in Atlanta, where he serves as senior pastor. “You can’t serve God and money. You cannot serve God and mammon at the same time.”

Warnock goes on to demand that America “choose ye this day!” It’s an apparent reference to picking a side between serving your country in uniform or serving God. Here’s the video, just to give you the full effect of the preacher’s enthusiasm for this proposition.

It’s certainly a curious choice to talk about serving money, or mammon (the inherent evil of wealth) when talking about people in the military. The budget for the United States’ armed forces is certainly massive, but the individual service members, particularly the enlisted men and women, aren’t exactly rolling in dough. In fact, if most of the single, entry-level soldiers, sailors and airmen weren’t provided with free housing and meals on base, they probably couldn’t afford to survive, given the cost of living around most bases. (This is particularly true of San Diego.)

But Warnock doesn’t appear to be only speaking of “the money” in terms of the conflict of interest he perceives. He obviously saw something inherently evil, or at least ungodly, in enlisting to fight and potentially die for your country. One would have to wonder why he would arrive at that conclusion and preach such things to his flock. We’ve heard arguments in the past about how killing is never acceptable in the eyes of the Lord based on the commandment “Thou shalt not kill.” But most biblical scholars these days seem to agree that the actual translation didn’t say “kill,” but rather “murder.” Fighting in battle and taking the life of your enemy isn’t considered unjust murder. Nor is taking a life in self-defense for that matter.

In any event, I’d imagine that this doesn’t paint Warnock in a very good light, particularly when it comes to military families. And keep in mind, this is the same guy who told the world that everyone needed to repent for their worship of whiteness and claimed that socialism is supported by the Bible. There have to be some leaders in the Georgia Democratic Party who are slamming their heads into their desks about now.