CNN to MSM: Refuse to Report on Trump Election Challenges!

Suggested new CNN slogan: “We Don’t Report. We Decide for You.”

On today’s New Day, the idea was seriously propounded that the media should refuse to report on, or examine the merits of, Republican challenges to election results. CNN has concluded that the challenges are not “serious,” and thus that reporting on them would only serve to do the Republicans’ work for them.

Co-host Alisyn Camerota kicked off the discussion by pointing to a recent poll showing that 70 percent of Republicans think that Biden’s win was due to fraud. An angry John Berman shouted that Republicans believe that because people like Republican House Minority Leader Kevin McCarthy have “made it happen.”

Berman began the process of deep-sixing Republican challenges by saying he refused to get into the “nitty-gritty” of the news that in Michigan, the two Republican members of the Wayne County vote-canvassing board have rescinded their certification of the votes there. Exclaimed Berman: “it doesn’t matter!”

Here’s the moment from Berman:

I really don’t want to really get into the nitty-gritty of the reporting there, because as you have noted eloquently, it doesn’t matter! Right? What the Trump campaign and their acolytes are doing is trying to inject these sentences into the ecosystem.

Berman then turned to CNN analyst Jessica Huseman, lavishly praising her “eloquent” work on the subject. Huseman proceeded to make her astounding suggestion:

“I don’t think that there’s any point in the media lending these cases any credibility or examining the merits of the claims, because they simply don’t exist.” 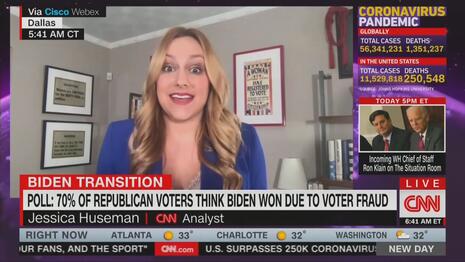 But if the media accepts Huseman’s suggestion, and refuses to examine “the merits of the claims,” how can they possibly conclude that they have no credibility?  Huseman is in effect telling the media: take my word for it!

So there you have it. CNN calling for a media blackout on Republican challenges to the election. The MSM shouldn’t “talk about,” get into the “nitty-gritty,” or “lay out” GOP claims. Paging Jeff Bezos and the warning of his hip-pocket newspaper: “Democracy Dies in Darkness.”

ALISYN CAMEROTA: Developing overnight, House Minority Leader Kevin McCarthy giving the New York Times some insight into why Republican leaders are not pushing for the transition to Biden to begin. The Times’ Jonathan Martin asked, doesn’t Biden cool the country’s political temperatures, at least at first? McCarthy responded: “It depends how it turns out. If you have 70% of Republicans who thought he cheated, he’s still going to have a hard time.”

Minority Leader Kevin McCarthy wasn’t just spitballing that number. That’s from an actual poll. That’s Monmouth poll, where they ask: do you think that Biden won this election fair and square. Only 18% of Republicans a week ago, well, even less a few days ago, thought that. And they think it’s due to voter fraud; 70% of Republicans think that.

And so, it turns out that the blizzard of, you know, specious court cases and the constant repetition of that slogan—voter fraud, voter fraud—is taking root.

JOHN BERMAN: McCarthy throws out that statistic, as if it just happens to be randomly occurring, [shouts] when he’s one of the guys who made it happen! It’s because of Kevin McCarthy that 70% of Republicans think, wrongly, that this election was somehow fraudulent. And Jessica, you’ve been so eloquent about this. And I really appreciate the reporting and writing you’ve done on this.

I just want to, so people know, out of Michigan overnight, there are reports that those two members on the Wayne County Board of Canvassing have rescinded their certification of the votes in Wayne County.

I really don’t want to really get into the nitty-gritty of the reporting there, because as you have noted eloquently, it doesn’t matter! Right? What the Trump campaign and their acolytes are doing is trying to inject these sentences into the ecosystem.

JESSICA HUSEMAN: These are not serious legal cases. They never have been serious legal cases. What they are is an attempt to delay the inevitable result of this election for so long that people begin to doubt the legitimacy of Biden’s presidency. And I think that, you know, the statistic that you guys gave, the polling statistic that 70% of the Republican party does not, is exactly what they’ve been trying to achieve.

And I don’t think that there’s any point in the media lending these cases any credibility or examining the merits of the claims, because they simply don’t exist.