I am enjoying the squirming of Nancy Pelosi’s nephew, California Governor Gavin Newsom, now that he has been exposed as completely disregarding the COVID guidelines he is trying to force  40 million Californians to follow.  The very same man who told us that when dining out we should put a mask on in-between bites, that we should have no more than 10 people (from no more than 3 households) at our outdoor Thanksgiving celebrations was spotted and photographed violating all of his strictures on the rest of us.

Even worse, the party was held at The French Laundry, one of the fanciest and most famous restaurants in the world.  And it was a 50th birthday party for one of his old friends, who just happens to be a lobbyist. Also in attendance: The CEO and chief lobbyist of the California Medical Association, who like Newsom obviously don’t believe the mask and social distancing regulations are genuinely important.

You’ve probably seen the utterly phony “apology” he made to Californians at a press conference. But take a good look at his smiles as he lies like a Persian rug. He seems to think that the rubes, who are expected to give up their family gatherings at Thanksgiving, are so dumb that they will buy it. His smirks infuriate me – and I have to think they infuriate the millions of Californians who are losing or have lost their jobs and businesses.

The party was NOT outside as he claimed. Too bad for Gavin that the pictures that Fox 11 Los Angeles published came after he smirkingly lied his butt off.

Tucker Carlson did a terrific job mocking him, his Aunt Nancy, and Senator Dianne Feinstein, all of whom know that the panic campaign over COVID, requiring people to symbolically assent to control by wearing a mask, is utter BS. When they think the peons won’t see them, they walk around without masks.

I am old enough to vividly remember Joe Isuzu, the attention-grabbing comic liar whose commercials for Isuzu grabbed a lot of notice a few decades ago, though they sold few vehicles. For instance:

I think that I see a certain family resemblance. The Liar brothers: 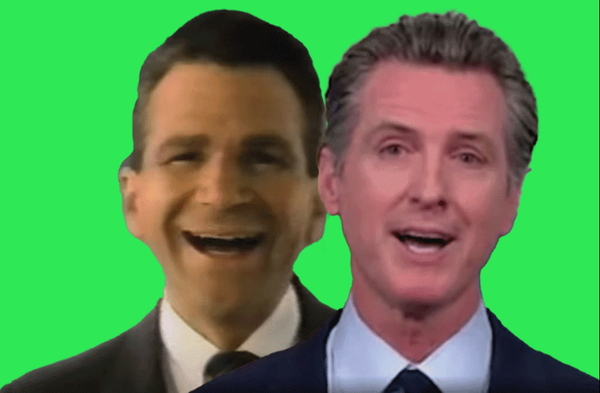 This incident would end the career of most politicians, but Newsom has so much backing from the media and the power elite that he probably thinks his ambition to become the president is still realistic.

And he may be correct.