Jayapal and The Squad: Lindsey Graham must resign for his “dangerous attack on our democracy” 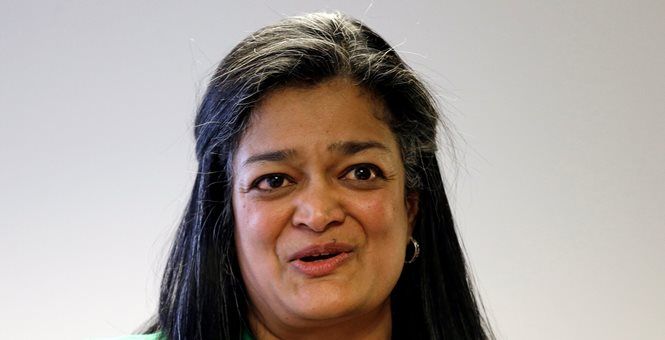 Rep. Pramila Jayapal (D-WA) calls for the resignation of Senator Lindsey Graham after stories emerged about the senator’s conversation with the Georgia secretary of state Brad Raffensperger. Raffensperger, a Republican, accused Graham of trying to get him to throw out mail-in ballots during a phone call about the process of signature verification. Graham says that is malarkey, he was asking for clarification.

During an interview this morning on Fox and Friends, Graham said he posed a simple question to Raffensperger, “How would you verify a mail-in ballot signature?” The concern comes from the fact that the outside envelope with a signature is separated from the secrecy envelope inside which contains the actual ballot. Therefore, there is no way to compare signatures once the envelope is opened. Graham pointed out that in the last election, the rate of ballot rejection was 3.5% while this election’s ballot rejection rate is 0.3% though four times more mail-in ballots were counted. The difference in the vote total is about 39,000, Graham said, and that is enough to make up what the president is behind in Georgia.

Graham requested donations from Fox viewers concerned about counting Georgia ballots. He asked them to go to LindseyGraham.com to contribute. The money goes to the Purdue and Loeffler campaigns. “Let’s make The Squad’s life miserable by holding on to the Senate,” he said.

For some reason, Rep. Jayapal is the flavor of the month with online publications. I’m seeing several articles about her, touting her high level of votes in her re-election race and her intentions to continue to push the agenda of The Squad in the incoming Biden administration. She, along with Representatives Ilhan and Tlaib, are calling on Graham to resign. He poses a threat to our democracy, you know, for asking a question about how voter signatures are verified in Georgia. Jayapal is interviewed by Teen Vogue magazine which spotlights her demand that Graham resign.

It has now been corroborated that he urged the Secretary of State in Georgia to find a way to throw out legally cast ballots. There must be accountability and justice for this dangerous attack on our democracy.

Lindsey Graham attempted to commit voter fraud. He can’t get away with it. Thank you @PramilaJayapal for demanding accountability. https://t.co/bzcutG6aM8

It’s time for Lindsey Graham to submit his resignation. https://t.co/XFzHmdV66I

I haven’t found a tweet from AOC yet calling for Graham’s resignation but one will likely come as The Squad sticks together.

For whatever reason, Raffensperger is telling the media that Graham is trying to meddle in Georgia’s election. We’ve got a Republican on Republican battle going on here.

“During our discussion, he asked if … the absentee ballots could be matched back to the envelope,” Raffensperger told CBS This Morning. “I explained our process, after it went through two sets of signature match, at that point they were separated. But then Senator Graham implied for us to audit the envelopes and then throw out the ballots for counties who have the highest frequency error of signatures. I tried to help explain that because we did signature match, you couldn’t tie the signatures back anymore to those ballots.”

While the socialist/Marxist women of The Squad may be angered that Senator Graham is asking questions during a very unusual election year, Democrats are asking Biden voters from other states to move to Georgia temporarily, register to vote, and then vote for the two Democrats running for Senate in January. This action takes advantage of a federal loophole in Georgia law. The Secretary of State says Trump’s anger toward him, as well as anger directed toward him by Senate candidates David Perdue and Kelly Loeffler and other Republicans, is retaliation for turning down the co-chairmanship of the Trump re-election campaign back in January.

In January, Raffensperger declined to serve as honorary co-chair of the Trump campaign in Georgia and later rejected GOP requests to publicly show support for Trump, ProPublica reports. He noted that, if he were to take sides while overseeing an election, it could potentially be seen as a conflict of interest, especially when most secretaries of states in the country tend to remain neutral for this reason.

“It is our standard practice not to endorse any candidate,” wrote Deputy Secretary of State Jordan Fuchs in an email to Robert Kirkland, a senior adviser for the Trump campaign, at the request of Raffensperger, according to ProPublica. “This policy is not directed at any specific candidate, but all candidates, as the Secretary oversees elections and the implementation of new voting machines here in Georgia.”

In an ardent push for Raffensperger to endorse Trump, the secretary of state also reported that Kirkland stormed into a meeting uninvited to demand that he publicly support the campaign.

What all this kerfuffle sounds like is Raffensperger thought he heard an implied order from Graham to toss ballots while Graham says he was asking questions about the process and advising Raffensperger on the legality of his actions.

Raffensperger told The Washington Post on Monday that he had spoken to GOP Sen. Lindsey Graham, who questioned him about the signature-matching law in the state and whether political bias influenced poll workers from accepting or throwing out ballots. Graham also reportedly asked if Raffensperger had the power to toss out ballots.

Raffensperger told CNN’s Wolf Blitzer on Monday that Graham, who has repeatedly questioned the validity of legally cast ballots, pressured him to reverse the results of Georgia’s election.

“He asked if the ballots could be matched back to the voters,” Raffensperger said. “I got the sense it implied that then you could throw those [out]…if you look at the counties with the highest frequent error of signatures. So that’s the impression that I got.”

“It was just an implication that of, ‘Look hard and see how many ballots you could throw out,’” he added later.

Raffensperger is making the rounds in the media, bringing the phone call from Graham into question. All claims of voter fraud will be investigated, he says, though no evidence of widespread voter fraud has been found so far. Trump lost Georgia by 14,000 votes in the initial count. Raffensperger ordered a hand recount last week of nearly 5 million votes. The deadline for counties was 11:59 p.m. on Wednesday in order to certify state election results by Friday. We will see how these deadlines play out since Georgia ballots keep turning up which had not previously been counted. In the meantime, Lindsey Graham isn’t going anywhere. Sorry, Squad.