Stop the Lockdowns and Let People Take Their Own Risks 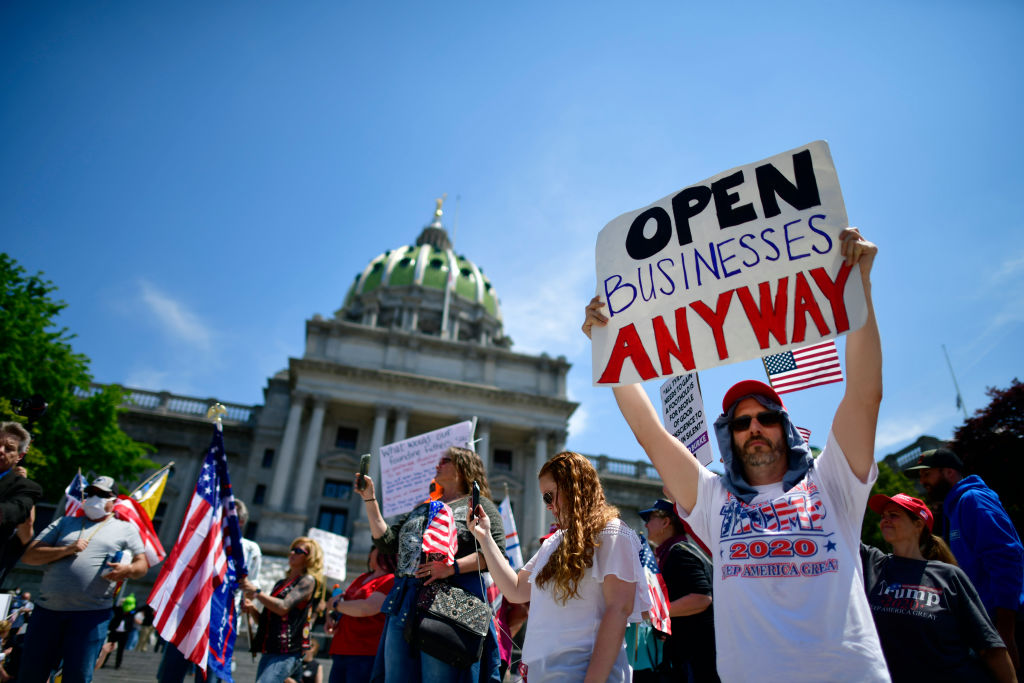 Government has no right to infringe on our liberties in this way, even if there is a pandemic going on.

Demonstrators rally outside the Pennsylvania Capitol Building regarding the continued closure of businesses due to the coronavirus pandemic on May 15, 2020 in Harrisburg, Pennsylvania. (Photo by Mark Makela/Getty Images)

The City of Philadelphia has announced that until January 1, it will “shut down indoor dining, gyms, museums, and ban public and private gatherings.” This declaration comes after COVID-19 cases in the region peaked at 6,023 on November 12.

The significant increase in cases and percent positivity across much of the state is cause for concern. We need all Pennsylvanians to take a stand and answer the call to protect one another. We need Pennsylvanians to be united in wearing a mask, practicing social distancing, washing our hands and avoiding gatherings. It is only by working together that Pennsylvanians can prevent the spread of the virus.

Given Philadelphia’s broad influence over the surrounding area, there is a reasonable probability that Montgomery, Chester, Bucks, and Delaware counties will all follow suit in forcing industries to close. This comes after the declaration by the World Health Organization (WHO) a month ago pointing to the issue of locking down states for too long of a time. “Because of their severe economic, social & broader health impacts, lockdowns need to be limited in duration,” they tweeted.

The WHO continued: “Lockdowns are not sustainable solutions because of their significant economic, social and broader health impacts.”

Pennsylvanians this summer were hit incredibly hard by government-mandated lockdowns. It is quite cruel to think that the power we have given to the state is being used to determine which businesses are “essential” and “non-essential” to a free people. By going along with this nonsense, we forget one simple fact: it is up to the American people to determine what is essential, not our power-intoxicated “leaders.”

More jobs will be lost if this continues, and more businesses will forever close their doors. According to one study, 41 percent of black-owned businesses were unable to reopen after the brutal lockdowns in April. Minorities are hit hardest by these tyrannical restrictions. Even left-leaning Vox has admitted this.

First the narrative was “stop the spread.” Fair enough. I am behind that. But we have strayed far from that narrow path and somehow come to the conclusion that we can “cure the spread” by forcing people into their homes for months on end, only prolonging the disease. I know politicians are nice and comfortable in their luxurious homes, but it turns out they do not have the capability to battle a deadly pandemic. A disease will do what a disease does. It will infect people. And government forcing us to hide away until a vaccine comes, whenever that is, is asinine. I know Governor Wolf can afford to sit on the couch and drink champagne until the end of time—but normal Americans can’t.

It turns out that not a single country with high cases that’s locked down has handled this thing correctly. Why? Because we can’t handle a pandemic at all. We can only try and be responsible and live with it until a vaccine comes. For instance, Italy was one of the first to institute lockdowns; now they are back at 33,977 cases as of November 15. Iran also did, and now they are at 13,053 cases as of November 16. In fact, nearly every country in the world is peaking right now. And locking us down again will only delay the inevitable.

We may very well have a vaccine soon. We may very well not. We don’t know. And that is the fundamental truth. It seems our government has become so enwrapped in this disturbing vision of protecting the people that they have forgotten to leave personal responsibility up to the people. They do not trust us anymore. They only trust themselves and their inflated egos.

COVID-19 is a fatal disease. But the consequences of locking down places like Philadelphia will do insurmountably more harm than good. According to the CDC, 25.5 percent of Americans aged 18 to 24 “seriously considered” suicide after August’s lockdowns; this number was as high was 16 percent for those 25 to 44. The past year has also seen the highest number of opioid-epidemic related deaths at approximately 71,000. And calls to distress helplines grew by an unbelievable 890 percent this April (when lockdowns were the norm). Simply put, we cannot accept these outcomes. And we can change them through practical policy.

My hope is that even in a Biden-Harris administration, the states will stay open. Let the alarmists decide whether they want to camp out in their basements until the end of time. Let the rest of us make a decent wage and not go broke. Risk is something we humans have to calculate on a daily basis. There will always be risk.

But for those who acknowledge a 2.3 percent case fatality rate risk in the U.S. and can’t stand the idea of not being able to pay the bills and having to go on welfare, let them participate in the market economy. The government needs to have the guts to believe in the American people and entrust them with the inalienable right to make decisions about the trajectories of their lives.