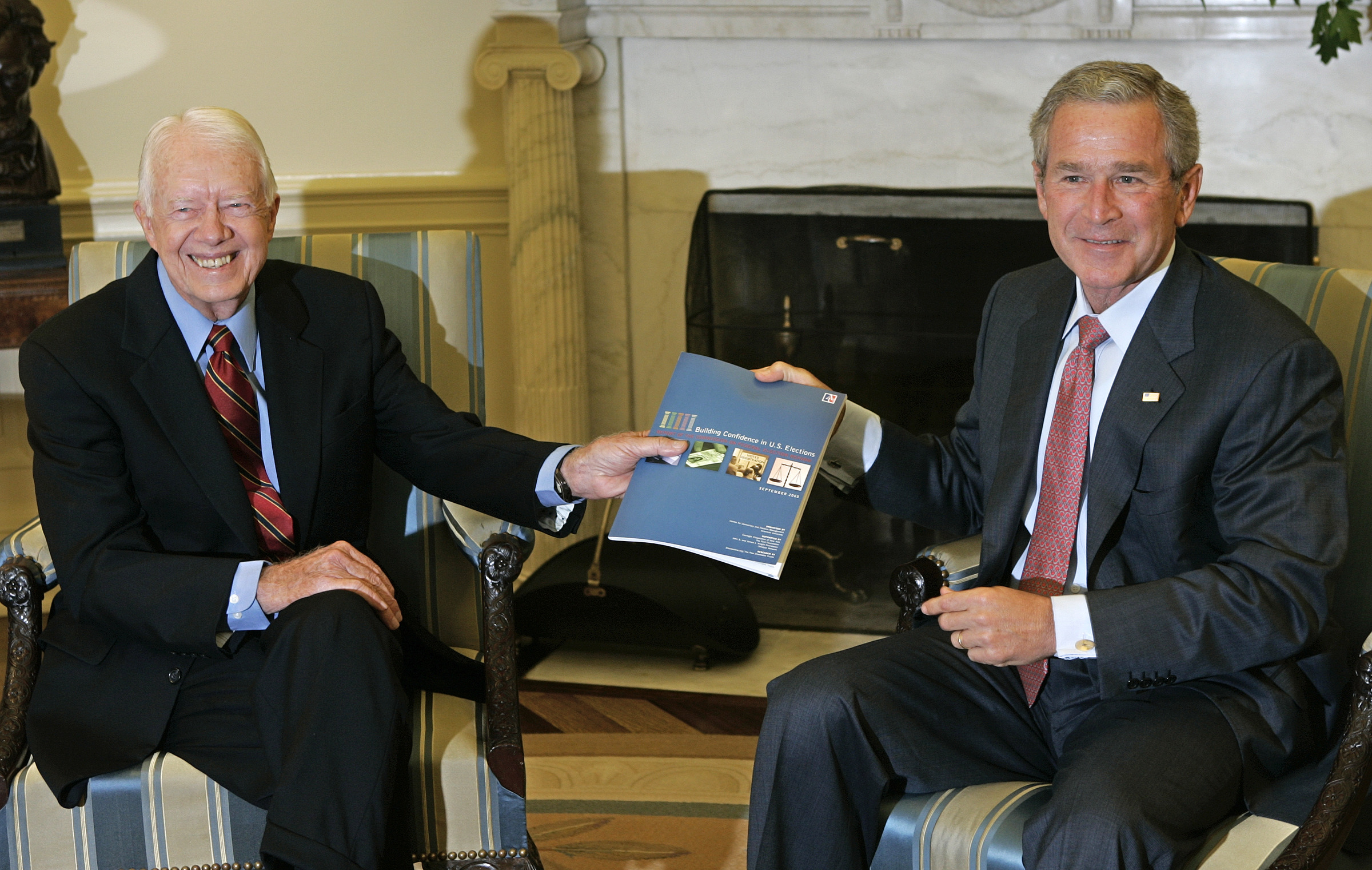 They called on states to increase voter-ID requirements; to be leery of mail-in voting; to halt ballot harvesting, to maintain voter lists, in part to ensure dead people are promptly removed from them; to allow election observers to monitor ballot counting; and to make sure voting machines are working properly.

They also wanted the media to refrain from calling elections too early and from touting exit polls.

All of this may sound eerily similar to the issues in the prolonged presidential election battle of 2020. But these were among the 87 recommendations from the 2005 report of the bipartisan Commission on Federal Election Reform, known informally as the Carter-Baker Commission.

The commission was created to address voting and election-integrity issues raised by the tumultuous 36-day post-election battle of 2000, which was settled by the U.S. Supreme Court decision that resulted in awarding Florida’s 25 electoral votes and the presidency to Republican George W. Bush over Democrat Al Gore.

Had Congress and state governments adopted many of the panel’s recommendations, the 2020 post-election mess between President Donald Trump and former Vice President Joe Biden might have been avoided, said Carter-Baker Commission member Kay C. James, now the president of The Heritage Foundation.

“So many of the problems we’re now hearing about in the aftermath of the 2020 election could have been avoided had states heeded the advice of the Commission on Federal Election Reform,” she said.

Simple protections against fraud, like voter ID and updated voter-registration lists, make perfect sense if we truly believe that every vote must count. Election officials should take another look at the commission’s recommendations and make sure they’re doing everything possible to protect the integrity of our elections.

Several state legislatures adopted aspects of the recommendations, particularly voter-ID proposals. However, Congress reportedly was unenthusiastic about the report.

Major media outlets have called the race for Biden, but election litigation is still playing out in courts, and votes are still being counted.

Here’s a look at the 2005 panel’s recommendations relevant to this year’s elections.

With the vast expansion of mail-in voting this year, voter-ID requirements were less likely. Today, states have a patchwork of voter-ID laws, with 36 states either requiring or requesting voters to present identification at the polls, according to the National Conference of State Legislatures. The conference says only six states have “strict” photo-ID requirements—Georgia, Indiana, Kansas, Mississippi, Tennessee, and Wisconsin.

The Carter-Baker Commission called for voter-ID standards nationwide in its 2005 report.

“To ensure that persons presenting themselves at the polling place are the ones on the registration list, the Commission recommends that states require voters to use the REAL ID card, which was mandated in a law signed by the President in May 2005,” the Carter-Baker Commission report said.

“The card includes a person’s full legal name, date of birth, a signature (captured as a digital image), a photograph, and the person’s Social Security number. This card should be modestly adapted for voting purposes to indicate on the front or back whether the individual is a U.S. citizen. States should provide an [Election Assistance Commission]-template ID with a photo to non-drivers free of charge.”

Carter, when speaking months after the release of the report, said other countries not known for being examples of democracy had fairer elections than the United States, and stressed the need for photo IDs.

“It’s disgraceful and embarrassing,” the former president said in May 2006. On IDs, Carter said, “Americans have to remember you have to have the equivalent to what we’re requiring to cast a ballot to cash a check or board a plane.”

In a brief filed supporting the Trump campaign’s Pennsylvania litigation over mail-in ballots, a group of Republican state attorneys general reference the Cater-Baker Commission report among other items regarding mail-in voting and ballot harvesting.

The 2020 election trends seemed to shift dramatically as mailed-in votes were counted. Further, many questions have emerged about the point of origin for ballots.

“State and local jurisdictions should prohibit a person from handling absentee ballots other than the voter, an acknowledged family member, the U.S. Postal Service, or other legitimate shipper, or election officials,” the 2005 commission report said. “The practice in some states of allowing candidates or party workers to pick up and deliver absentee ballots should be eliminated.”

However, this year, as mail-in voting veered into becoming a partisan issue, the Carter Center issued a statement promoting support for mail-in voting, but maintaining safeguards against ballot harvesting. The Carter Center, founded by the former president and first lady Rosalynn Carter, is affiliated with Emory University and promotes peace and democracy efforts globally and domestically.

A Carter Center press release in May said the commission report “noted among its many findings and recommendations that because it takes place outside the regulated environment of local polling locations, voting by mail creates increased logistical challenges and the potential for vote fraud, especially if safeguards are lacking or when candidates or political party activists are allowed to handle mail-in or absentee ballots.

However, the Carter-Baker Commission found that where safeguards for ballot integrity are in place—for example in Oregon, where the entire state has voted by mail since 1998— there was little evidence of voter fraud,” the Carter Center statement continued. “The commission’s main recommendations on vote-by-mail and absentee voting were to increase research on vote-by-mail (and early voting) and to eliminate the practice of allowing candidates or party workers to pick up and deliver absentee ballots.

Fortunately, since 2005, many states have gained substantial experience in vote-by-mail and have shown how key concerns can be effectively addressed through appropriate planning, resources, training, and messaging.

Carter himself is quoted in the press release saying, “I urge political leaders across the country to take immediate steps to expand vote-by-mail and other measures that can help protect the core of American democracy—the right of our citizens to vote.”

In Nevada, the Trump campaign asserts there were potentially thousands of out-of-state votes casts in one of the most closely contested states.

The Carter-Baker Commission report called for states to make it easier to track registered voters who move from one state to another to reduce duplication of registrations.

The report states, “Invalid voter files, which contain ineligible, duplicate, fictional, or deceased voters, are an invitation to fraud.”

“In order to assure that lists take account of citizens moving from one state to another, voter databases should be made interoperable between states,” the Carter-Baker report stated. “This would serve to eliminate duplicate registrations, which are a source of potential fraud.”

The report calls for states to maintain and update their voter-registration lists.

All states should have procedures for maintaining accurate lists, such as electronic matching of death records, driver’s licenses, local tax rolls, and felon records.

Federal and state courts should provide state election offices with the lists of individuals who declare they are non-citizens when they are summoned for jury duty.

In Pennsylvania, Michigan, and Nevada, Republicans have complained that qualified election observers have been prohibited from watching the counting.

The Carter-Baker Commission report stressed the need for election observers to maintain the integrity of the ballots.

“All legitimate domestic and international election observers should be granted unrestricted access to the election process, provided that they accept election rules, do not interfere with the electoral process, and respect the secrecy of the ballot,” the 2005 report said.

Such observers should apply for accreditation, which should allow them to visit any polling station in any state and to view all parts of the election process, including the testing of voting equipment, the processing of absentee ballots, and the vote count.

States that limit election observation only to representatives of candidates and political parties should amend their election laws to explicitly permit accreditation of independent and international election observers.

Voting machines have also been a significant issue in 2020, particularly in Michigan, as one county there flipped from Biden to Trump after a hand recount showed the machine count to be inaccurate.

The Carter-Baker Commission suggested that machines print out paper receipts for voters to verify their vote was accurately counted.

“States should adopt unambiguous procedures to reconcile any disparity between the electronic ballot tally and the paper ballot tally,” the 2005 report says. “The Commission strongly recommends that states determine well in advance of elections which will be the ballot of record.”

On election night, the Fox News Channel was the first to call the state of Arizona for Biden, prompting outrage in the Trump camp. Moreover, major media outlets have projected Biden to have won the election, even as vote counting and litigation continue.

The 2005 commission report also addressed problems with the media, suggesting news outlets voluntarily offer candidates free airtime and also show restraint in calling a state for one candidate or the other. The First Amendment would prevent any such rule from being mandatory.

“In July of even-numbered years, the U.S. Department of Justice should issue a public report on its investigations of election fraud,” the report says.

This report should specify the numbers of allegations made, matters investigated, cases prosecuted, and individuals convicted for various crimes. Each state’s attorney general and each local prosecutor should issue a similar report. … The U.S. Department of Justice’s Office of Public Integrity should increase its staff to investigate and prosecute election-related fraud.