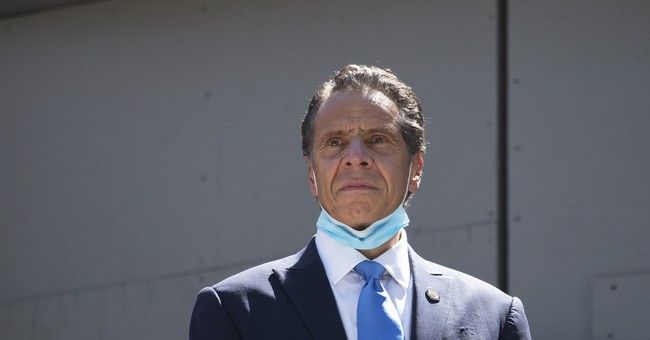 Good thing I’ve started drinking in the morning. This news would have been hard to face sober.

But you know what? He deserves an Emmy. Marvel at his achievement: Day by day he created a fictional universe, believed by millions of people, that he was a coolheaded visionary hero of crisis management instead of a serially blundering imbecile. He racked up a body count in New York not even approached by other U.S. states, including ones like California with populations much bigger than his. And dopey liberals are handing him awards for it.

Let’s see George Lucas or Steven Spielberg pull that off.

Dave “Iowahawk” Burge’s response to the news: “please stay tuned through the 18 hour ‘In Memoriam’ segment.”

Gov Andrew M Cuomo of NY will receive the International Emmy Founders Award in recognition of his leadership during the Covid19 pandemic & his masterful use of TV to inform & calm people around the world. The Emmy will be presented to @NYGovCuomo on Nov 23 https://t.co/dwKIImwYNV pic.twitter.com/1mKkmg6FKW

“This award seems like the ultimate elevation of style (he’s good on TV!) over results,” writes David French. That’s the core truth of last spring’s media Cuomomania: He wasn’t an effective leader but he played one on television convincingly. Tell me again he doesn’t deserve an award for drama.

Brooke Rogers cut to the heart of New Yorkers’ and the broader left’s Cuomo fascination in an op-ed yesterday. He’s an overbearing father figure, which is obnoxious 99 percent of the time but reassuring during that one percent when everyone’s panicking and needs to know that someone’s in charge.

At Jezebel, Rebecca Fishbein summed up the emerging urban infatuation with the governor: “In this time of crisis, with little concrete information available, I need Cuomo’s measured bullying, his love of circumventing the federal government, his sparring with increasingly incompetent city leadership.”

As the pandemic raged on, the governor seemed to take his role as “Daddy Cuomo” to heart. His tweets became increasingly scolding. In June, he responded to a video of New Yorkers gathered outside at St. Mark’s Place with: “Don’t make me come down there” — the kind of threat kids might expect when they’ve gotten into a particularly loud scuffle.

He brought his daughter to a press conference, frequently ragged on her boyfriend during briefings and even went so far as to put a “boyfriend cliff” on one of the several bizarre COVID-19 posters he commissioned to immortalize his leadership during the pandemic. For Cuomo, the lines between child-rearing and governance are blurred, and New Yorkers are the ones who frequently pay the price.

If New York were an actual family, someone would have called CPS on him before the end of March. I wonder how many nursing-home residents will need to die in the state’s second wave for someone to give him an Oscar.

It must be said: If Cuomo’s getting an Emmy for best actor, it’s partly due to the strong performance of his supporting actor, Donald Trump. Just as Obama’s undeserved Nobel was essentially a commentary on Bush’s failures, I think Cuomo’s award is partly or even mostly a reaction to Trump’s public statements. His own advisors convinced him to wind down the coronavirus task briefings in spring because his habit of turning them into 90-minute rant sessions about the media and the Russia investigation were pissing voters off. Americans were worried about the virus, not Trump’s grievance medley. It was also at one of those briefings where he made his now legendary suggestion about introducing some sort of disinfectant into the body to cleanse it of COVID while a dazed Deborah Birx looked on. Cuomo was a disaster of pandemic control in New York but his daily briefings did make for a favorable contrast with Trump’s, as he was focused, hit the right notes of concern and caution, and seemed to know what he was talking about — even as the bodies piled up. It’s ironic that the president, a bona fide TV star, would have trouble communicating while a charmless goon like Cuomo would succeed, but oh well.

Exit question: Cuomo’s going to start taunting Trump about having won more Emmys than he did for “The Apprentice,” isn’t he?