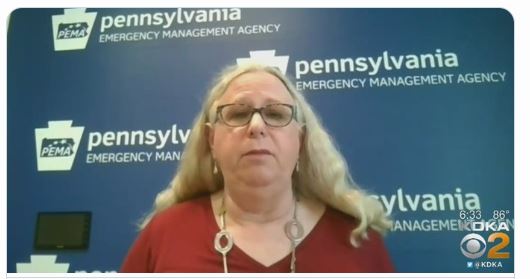 In a bid to call itself an “inclusive” administation, claimed President-elect Joe Biden is in talks to bring in a doozy of an official in his plan to halt COVID.

Dr Rachel Levine, Pennsylvania’s secretary of health, has been tipped for a high-ranking position in the Joe Biden administration. Levine is one of the highest-ranking transgender officials in the US, and has spent this year leading Pennsylvania’s response to the pandemic in the face of shameless transphobia.

Her hard work and decades of medical experience could soon be rewarded, with her name now attached to two key White House roles.

The LGBTQ Victory Fund, a political action committee (PAC) that helped elect hundreds of queer politicians in the 2020 election, has suggested Biden should appoint Levine either secretary of health and human services or US surgeon general. Ruben Gonzalez, vice president of the PAC, said the organisation has already had “informal conversations” with the Biden transition team regarding LGBT+ appointments, and is “feeling very confident and very hopeful that we will see trans people serve in high-level roles in this administration”.

It’s not about the person being transgender.

This is a helluva power-monger, who as Pennsylvania’s top health official, was last seen demanding Pennsylvania residents wear COVID masks indoors, which not only is untenable, it’s also anti-science, as a recent Danish study on the uselessness of masks has now found. Listen to the science? Nope, under Plan Biden, it’s listen to the power-mad, the people who want to shut down the entire country, and keep shutting it down, extending and extending the shutdowns, while doing absolutely nothing of use to halt COVID. Biden repeats often that there will be ‘no national shutdown’ for the cameras, but with characters like this, yes, there will be a national shutdown. And it will have to be enforced by neighbor-spy-on-neighbor police-state snitching actions. The Lives of Others? Like that.

This is a socialist who loves not just the power, but the nomenklatura stuff, too, the goodies, the special benefits of being on the inside, living by a different set of rules from the rest of us.

The Pennsylvania health official first got her name in the national news last May, by forcing nursing homes with COVID patients to live side by side with vulnerable elderly residents, similar to what New York’s disgraced Gov. Andrew Cuomo did. That led to the deaths of nearly 3,000 elderly and vulnerable people, three quarters of all state COVID deaths, one of the highest in the nation. But ahead of that catastrophe, which she obviously knew was coming, she carved out a little escape hatch for her mom, moving the nonogenarian to a hotel.

Here’s what Penn Live reported at the time:

Health Secretary Rachel Levine said Tuesday that she had removed her 95-year-old mother from a personal care home amid a statewide coronavirus outbreak that has been particularly devastating to facilities that house elderly populations.

“My mother requested and my sister and I as her children comply to move her to another location,” Levine said at a press conference, responding to a question from ABC27. “During the COVID-19 outbreak. My mother is 95 years old. She is very intelligent and more than competent to make her own decisions.”

Department of Health spokeswoman April Hutcheson declined to name the facility but said the elder Levine and her children were notified of residents who tested positive and lived nearby within the personal care home.

Levine was careful to note that her mother was in a personal care home, not a nursing home, and that the facility in question fell under the jurisdiction of the state Department of Human Services, not her own agency.

Nonetheless, all three types of facilities are vulnerable to outbreaks of COVID-19.

According to state data, as of Thursday there were 12,677 resident cases of COVID-19 in addition to 1,922 cases among employees for a total of 14,599 cases at 549 individual locations across 44 counties.

Levine’s removal of her mother from the personal care home, which was revealed as she announced a plan to ramp up coronavirus testing in nursing homes, drew criticism

Protection for me, but not for thee, suck it up with life with the COVID patients, die early, and save the state some Medicaid costs.

This is a heck of an inhuman person, someone who tolerated seeding nursing homes with COVID patients, while shielding her own from any consequences on the side. Yes, she claims it wasn’t a nursing home, but it begs the question: Why did nursing homes need to be seeded at all with COVID patients. And if the health operation she runs is so wonderful, why did she get her mother out of it, getting her out of harm’s way while not warning others? It’s disgusting all the way around and this person should never be let near the levers of federal power, given this vile and lethal record.