The Taliban Come to America, Disguised as Philanthropoids 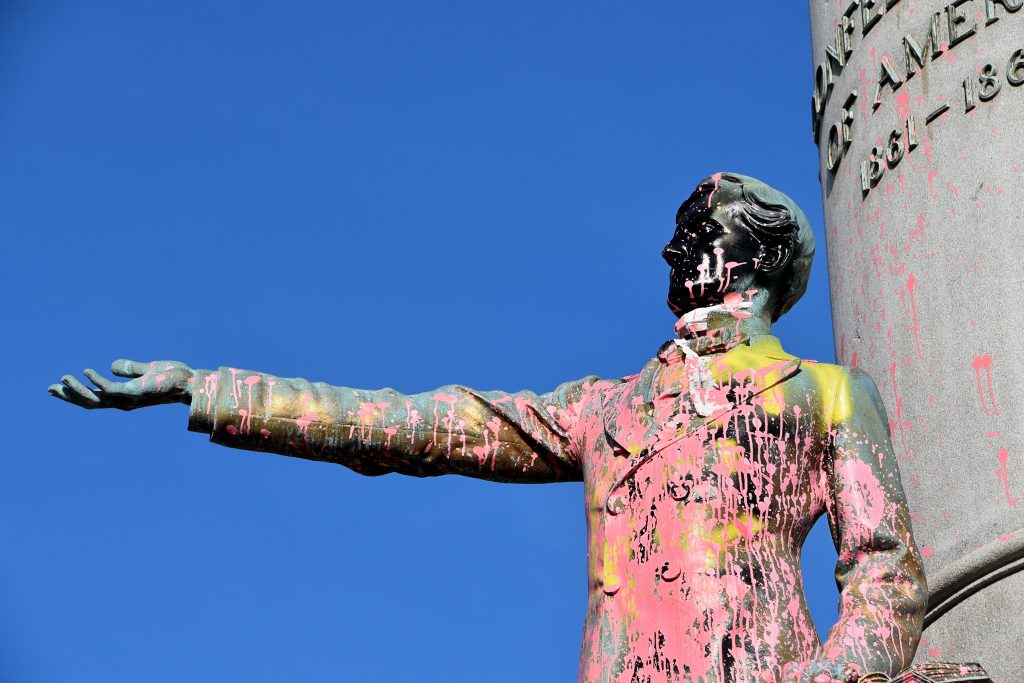 Only the unobservant will be startled by the recent announcement by the Mellon Foundation of its appropriation of $250 million for a “Monuments Project: Building the Commemorative Landscape for the 21st Century” on October 11. This is said to be the “largest initiative in the foundation’s fifty year history.”

If this allocation were devoted to the creation of new monuments to inspiring but neglected figures, there could be no objection to it. As Maryland’s Senate President Emeritus, Thomas V. Mike Miller recently observed, we need more monuments, not fewer of them. In an increasingly collectivist age, it is useful for the young to be reminded of the difference individuals can make, and for the middle-aged to be given the hope that their achievements will be indelibly memorialized.

But construction of new monuments is not, one fears, the focus of this new endeavor. The first grant announced from the $250 million is one of $4 million for a “National Monuments Audit,” to be accompanied by a “concurrent database of reported protest activities tied to monuments.” An additional $1 million is allocated for “ten Monument Lab field offices” that will “re-imagine monuments,” including the “relocation or re-thinking of existing monuments.”

Most citizens are unaware that their built landscape, the product of centuries of accretion, is to be “audited” by largely anonymous teams of activists nominated by philanthropoids from New York and equipped with a large budget for what is euphemistically called “re-location” but which generally means disappearance. This disrespect for local opinion and aspiration to rule from afar is in itself unattractive; one is reminded of the mantra of one of the first and greatest of the neo-conservatives, the late Sidney Hook, who once declared: “Heresy, yes; conspiracy, no!”

There stands outside my apartment building in Baltimore a conspicuous empty plinth, a suitable monument to intellectual vacuousness, which once supported a sad-eyed and tragic depiction of Chief Justice Roger Taney. This was removed at the instance of our since-jailed mayor, without a required hearing before the City Council, after a vote by a narrow majority by a Commission on Confederate Monuments appointed to by-pass existing review commissions on Municipal Art and on Historic Preservation. Never mind that Taney was a Unionist who did not follow his colleague Justice Campbell to the South, that he manumitted the slaves he inherited, that his justifiably infamous activist Dred Scott decision was motivated by a desire not to perpetuate slavery but to forestall civil war, and that the monument was erected not by Confederate memorialists but by Henry Walters, one of Baltimore’s great civic benefactors, and that those attending its dedication included prominent citizens imprisoned during the Civil War in defiance of Justice Taney’s attempt to vindicate the writ of habeas corpus in the Ex parte Merryman case, some of whom had been advocates of emancipation and defenders of the rights of free blacks.

No one wants context where there are “protest activities”; one of the municipal officials involved vindicated disappearance of the monument on the ground that it might otherwise be subjected to vandalism, public vandalism thus being preferred to the private variety.

It is clear that this sort of activity is what the Mellon grant is designed to support. It was one of five foundations (with total assets of $34 billion) contributing to the disappearance, with the help of another politically correct mayor, of four monuments in New Orleans. Three of these were to Confederate officials, Jefferson Davis and Generals Robert E. Lee and P. T. S. Beauregard. The fourth explicitly commemorated the restoration of ‘white supremacy’ by the temporary overthrow of a military-imposed government.

One can understand the resentment of blacks and some well-intentioned others at these commemorations. But there are nuances lost even here. Jefferson Davis was a fanatic, who favored the continuation of guerilla warfare after Appomattox. But a treason prosecution of him was abandoned for fear of his acquittal, the non-existence of a right of secession being far from clear before the Civil War. Robert E. Lee had not joined the Confederacy on its establishment, but only when his own state seceded after Lincoln’s call for troops to coerce the seceding states, and he forestalled continuation of the war after the surrender. The monument to the restoration of white supremacy was also a monument to the restoration of self-government, however deplorable the purposes to which it was put. The South was bitter and ruined when these monuments were erected, its infrastructure damaged, its economy subjected to the Republican protective tariff, its leadership class at least temporarily proscribed, most of its personal property confiscated without compensation, and its governments emerging from alien rule sustained by a formerly slave populace that was, though through no fault of its own, 90% illiterate. Along with the monuments, this context is sought to be expunged from memory. In Baltimore, a new interpretive plaque was not enough for the fanatics; any appreciation of Taney’s life, achievements,  and motivations had to be completely expunged.

The purpose here, sought to be so systematically advanced, is that anticipated in George Orwell’s 1984, where “Every record has been destroyed or falsified, every book has been re-written, every picture has been re-painted, every statue or street or building has been re-named, every date has been altered. And that process has been continuing day by day and minute by minute. History has stopped. Nothing exists except the endless Present in which the Party is always right.”

I was curious as to what sort of Board of Directors approved the Mellon project. I was not surprised that it consisted of the late sixties generation come to power. The President and four of the other eleven other board members are Afro-American; one of the others is Richard Brodhead, former President of Duke who was noted for his acquiescence to pressure group demands in his handling of the Duke Lacrosse case. Remarkably enough, the presidents of three of the four other foundations, the Ford, Rockefeller and Kellogg Foundations cooperating in the removal of the New Orleans monuments are Afro-American, as are 5 of 16 directors at Ford, 4 of 16 at Kellogg, and 5 of 13 at Rockefeller. This progress on the part of a once-oppressed 13% minority should be gratifying to all good citizens. The difficulty is that the demands for tolerance and understanding on the part of these recruits to the American nomenklatura appear to be directed ever outward, never inward. Inspection of foundation board composition discloses a pattern of aggravated incest.

It is rather astonishing that Mellon, which bills itself as “the largest supporter of the arts and humanities in the U.S.” should, at a time when symphony orchestras, museums, and theaters are fighting for survival in the coronavirus crisis, be giving its largest-ever grant to what is, in its most visible activities, a work of destruction.

It is also remarkable that an American elite given to virtue-signaling should be devoting so much of its energy to the co-opting of Afro-Americans onto non-profit boards and into the student bodies and faculties of elite universities while, as in 1968, huge percentages of Afro-American young men, for want of better employment opportunities, are relegated to participation in the drug-dealing underworld. Scarcely a dime of the resources of Mellon and the other large foundations is devoted to the promotion of vocational education, once urged by such as Booker T. Washington and William Howard Taft. As a recent study has shown, the leading foundations devoted more than a billion dollars to support of studies and advocacy groups promoting ‘gay rights’ while agitating scarcely at all for de-funding the drug underworld through legalization or reviving the Civilian Conservation Corps.

When the Rockefeller Foundation applied for a federal charter, it was refused by President Taft and his trust-busting Attorney General, George Wickersham, the latter decrying “an indefinite scheme for perpetuating vast wealth…entirely inconsistent with the public interest.” As a study by the present writer demonstrated as long ago as 1962, American foundations have long since abandoned uncontroversial activities such as medical research, largely yielded to government. Instead they have ventured ever more deeply into the domain of politics. The Ford Foundation in the era of Mc George Bundy, an American Grand Master (along with Justice Frank Murphy and Defense Secretary Robert Mc Namara, of the art of ‘failing upward’) sponsored two misbegotten initiatives: New York City regional school boards, designed as a sandbox for rising minority politicians, and endowment of La Raza to organize the previously quiescent Hispanic population. The former gave rise to militant teachers unions, the latter to formalized identity politics, as shown in the late Georgie Ann Geyer’s Americans No More.

The most somber prophet of modern totalitarianism, Jacob Burckhardt, wrote that in the wake of the Paris Commune, “there are everywhere good, splendid, liberal people who do not quite know the boundaries of right and wrong and where the duty of resistance and defense begins. It is these men who open the doors and level the paths for the terrible masses everywhere.” “A new element has entered politics,” he added, “a thoroughness that former conquerors knew nothing of, or at least made no conscious use of. They try to humiliate the conquered as deeply as possible in his own eyes, so that in the future he shall not rise again to any self-confidence.”

The last serious examination of the political activities of foundations was the congressional Reece Committee that proposed and imposed some restrictions on them, since diluted, in 1954. There is need for another Reece Committee, one more detached and less partisan, from which foundation-aided personnel should be rigorously excluded.

George Liebmann is the author of several books on law and politics, most recently America’s Political Inventors (Bloomsbury 2019).