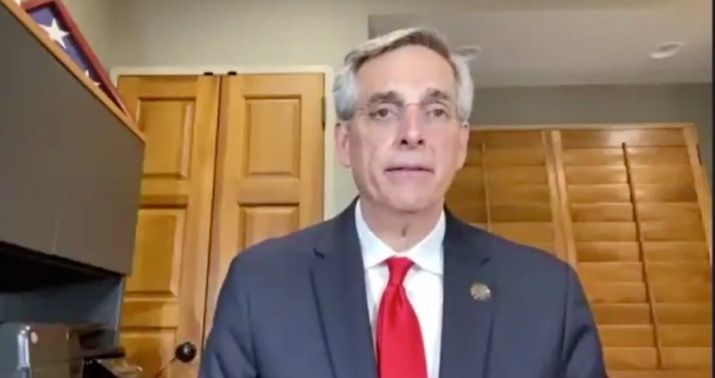 When the states are projected to certify their electionshttps://t.co/cdpxpk64YA

Like I said here, the problem with Trump’s coup plot is that he needs some state to go first in voiding their election with no assurance that other states will follow. It’s one thing to cancel a democratic election and trigger the insane upheaval that would follow knowing that it’ll mean your party’s leader will remain in power. It’s another thing to do it knowing that the effort might — and almost certainly will — fail. If Georgia certifies its results tomorrow, that’s 16 electoral votes off the board for Trump. Even if Michigan and Pennsylvania go through with the coup on Monday, Biden would still stand at 270. Trump would need to flip Nevada or Arizona or Wisconsin or something else to achieve his aim. So why would Michigan or Pennsylvania go through with it?

And if Georgia cowboys up and certifies, it’ll look that much weaker and inexplicable if Michigan and Pennsylvania refuse to do so. After all, Biden’s margin in GA is much smaller than it is in MI or PA. Georgia might effectively detonate the whole plot tomorrow, in other words, and if it does, according to CNN, that might end GSA chief Emily Murphy’s resistance to certifying Biden as the apparent winner for transition purposes. I think she’ll probably hold out until Monday to see what Michigan and Pennsylvania will do but the start of the formal transition may be a lot closer than you think if you’re getting your news from Rudy Giuliani and Sidney Powell.

The campaign’s legal effort to block certification in Georgia had a favorable draw today in federal court: The presiding judge was Steven Grimberg, appointed to the bench by Trump himself 14 months ago. Result:

Trump and his allies are now 1-32 in post-election litigation.https://t.co/nOMwMTYhjI

Reporter Adam Klasfeld watched today’s hearing. Sounds like it wasn’t a hard one for Grimberg:

The sole witness in the federal election case in Georgia is a Republican activist who thinks it’s “amazing” and suspicious that Biden got so many more votes than Trump in the batches that she saw.

“Plaintiff attempts to change the rules at the end of the game in order to alter the score.”

“I understand the plaintiff’s frustration that his favored candidate has lost.”

That doesn’t give him the right to manufacture claims, he adds.

“His undue delay prejudiced the Secretary of State and certainly prejudiced the millions of voters in this election,” U.S. District Judge Steven Grimberg said of the plaintiff.

Plaintiff’s lawsuit “does not have merit,” the judge says.

That would harm the public in “countless ways.”

“To halt the certification at literally the 11th hour, would breed confusion and disenfranchisement that I find have no basis in fact and law.”

I assume another suit will be filed overnight since this is, after all, a coup attempt, not a serious legal effort. The goal is to simply delay certification while Trump tries to pull whatever levers he can among Georgia Republican politicians, starting with Brian Kemp, to try to get them to intervene. We’ll find out tomorrow whether Kemp fears Trump more than he fears the residents of his own state. Even if certification does happen, there are bound to be lawsuits after that. But the further this process moves towards recognizing Biden’s victory, the less likely judges will be to reverse it.

Local TV caught up with secretary of state Brad Raffensperger this afternoon and asked about the state of the hand recount. Any doubt that Biden won? Nope, said Raffensperger.

Developing next live at 5 on @wsbtv – @GaSecofState tells me the statewide audit results are in and there’s “not a thimble full of difference” between the hand & manual recount. He says he has no doubt Joe Biden has won Georgia pic.twitter.com/9PO9C6t8Bu

He’s done a *lot* of media lately, which initially I assumed was just him enjoying the spotlight a bit. But increasingly I think it’s strategic. He knows that not every Republican official can be trusted right now to behave as ethically as him. The more he’s on TV updating voters about the state of the recount, the harder it gets for Kemp or some Trump ally somewhere in the bureaucratic food chain to swoop in and disrupt everything at the last second before certification. It’ll reek of exactly what it is, an attempt to slow down the process for Trump on the pretense that the canvassing process has hit a snag somewhere. There’s no snag anywhere, Raffensperger has said over and over again this week.

Our Townhall colleague Guy Benson conducted a notable interview with Joni Ernst today, keying off this even more notable soundbite from the deranged press conference led by Giuliani and Powell:

This is a holy crap moment: “In terms of the level of corruption we are looking at here, we have no idea how many Republican or Democratic candidates… paid to have the system rigged to work for them.” – Sydney Powell

Listen up, GOP. They’re calling out your elections next.

So Republicans who don’t go along with the big coup attempt might find themselves accused of complicity in the alleged communist vote-rigging plot, huh? I should have anticipated that. It’s how witch hunts work, after all. Ernst, who just got reelected easily, fortunately had no patience for it:

[S]he stressed there needed to be “proof” of wrongdoing and called accusations by Sidney Powell, one of the president’s lawyers, that lawmakers in both parties had helped rig the balloting “absolutely outrageous.”

“That is an offensive comment for those of us that do stand up and represent our states in a dignified manner,” said Ms. Ernst, the fifth-ranking Senate Republican who was re-elected this month. “We believe in honesty.”

She added: “I’ve worn our nation’s uniform to protect the values and freedoms that our nation espouses and to have that accusation just offhandedly thrown out there just to confuse our voters across the United States, I think that is absolutely wrong.”

That’s a nice show of spine by Ernst in her own defense. Let’s see if she’s willing to show any in defense of fair elections that didn’t turn out the way she wanted.

I’ll leave you with Powell on Fox Business tonight, openly advocating for a coup that’ll break the country apart to a host who’s clearly willing to entertain that scenario as well. Exit quotation from retiring Rep. Francis Rooney: “What about self-esteem or respect? What are these people going to do in the long run when they look back at how they just sort of slavishly devoted themselves to this guy?”

Sidney Powell: “The entire election, frankly, in all the swing states should be overturned and the legislatures should make sure that the electors are selected for Trump” pic.twitter.com/gA6aFVhvdt

Georgia’s secretary of state ordered the recount as a part of the risk-limiting audit process to ensure the public’s trust in the outcome of the presidential vote in the state, where Biden led by 12,284 votes, according to the audited results. That resulted in a 0.0099 percent variation from the original margin, they said.

Trump can request a full recount after the results are certified. That’ll be done via scan. There’s no reason to think it’ll be much, if at all, different.