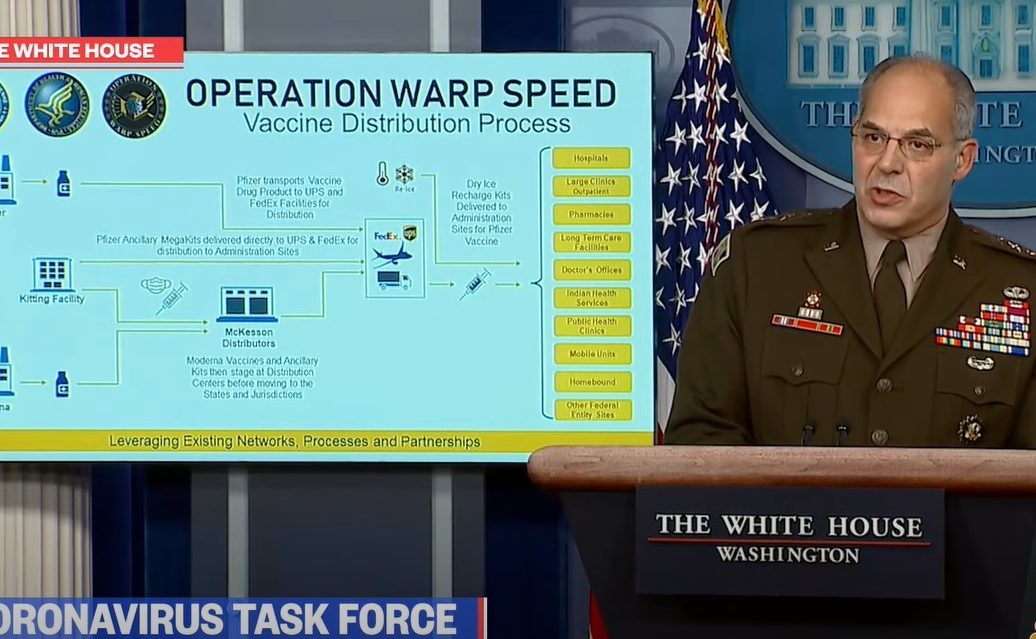 The chart below shown at a White House coronavirus task force briefing outlines the administration’s logistical process to release the vaccines from Pfizer and Moderna prioritizing front-line health care workers first. The pharmaceutical giant Pfizer announced the week after the election that its coronavirus vaccine candidate proved 90 percent effective. The news was quickly followed by an announcement from biotechnological company Moderna that its vaccine candidate showed to be 94.5 percent effective.

When Joe Biden, his team and Democrats say there is no distribution plan for the Wuhan coronavirus vaccine…they are very wrong. pic.twitter.com/ojdZ3ioSbF

Both Pfizer and Moderna’s vaccines are still pending emergency-use authorization from the Food and Drug Administration (FDA). Vice President Mike Pence said the vaccines would begin shipping within 24 hours after such approval.

.@VP Pence: “The day after one of these vaccines is approved we’ll be shipping vaccines to the American people and within a day after that we’ll be seeing those vaccines injected into Americans.”

National Institutes of Health Director Dr. Anthony Fauci reassured Americans at the White House Thursday that neither vaccine was a rushed in any way that might compromise their safety.

“We need to put to rest any concept that this was rushed in any inappropriate way. This is really solid,” Fauci said, as New York Democratic Gov. Andrew Cuomo casts partisan doubts on their safety because they were produced while President Donald Trump is still in office.

Dr. Anthony Fauci swipes at Biden and Democrats who have fostered distrust of a coronavirus vaccine under Trump: “We need to put to rest any concept that this was rushed in any inappropriate way. This is really solid.” pic.twitter.com/PWBugejCQA

Fauci added that he expects high priority people such as health care workers and those most vulnerable to viral complications to begin receiving doses by the end of next month. The infectious disease expert also emphasized that while the White House coronavirus task force was refraining from endorsing a national lockdown and instead urged Americans to double-down on their own efforts to reduce viral spread as cases surge from coast to coast.

Fauci cautioned the public not to give up such measures just because vaccines were coming closer on the horizon.

“If you’re fighting a battle, and the calvary is on the way, you don’t stop shooting. You keep going until the calvary gets here,” Fauci said.

Dr. Fauci: “Help is on the way…We need to actually double-down on the public health measures as we’re waiting for that help to come, which will be soon…we’re not talking about shutting down the country…if we do that we’ll be able to hold things off until the vaccine comes.” pic.twitter.com/QYVWB7KuX2

Centers for Disease Control Director Robert Redfield said towards the end of the press briefing that schools should still be able to operate as the vaccines remain in the pipeline. New York City Mayor Bill de Blasio shut down schools again this week as the city’s test-positivity rate reached 3 percent.

CDC Director Robert Redfield pointing out the obvious that triggers teachers unions, which is “[t]ere is extensive data” that “confirm[s]…K-12 schools can operate with face-to-face learning and they can do it safely and they can do it responsibly.” pic.twitter.com/o4nMS81Axp