Harvard graduate students demand a ban on Trump officials, Then the pushback began 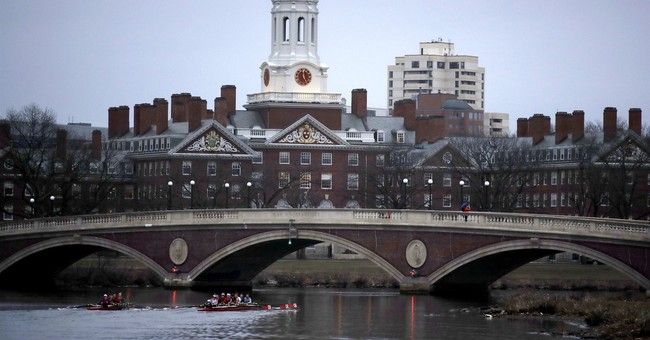 A petition began circulating around Harvard University seeking to ban Trump administration officials from the campus. The petition was drafted last week by students at the Graduate School of Arts and Sciences. The language in the petition has now been modified because of the pushback the action has received from those who are speaking up against censorship on campus.

Students in Harvard’s Graduate School of Arts and Sciences began circulating the petition at the Kennedy School of Government, and other parts of Harvard. The Kennedy School is a prestigious school that is known for hosting both Democrats and Republicans as fellows, speakers, and instructors. The graduate students of the Kennedy School are not on board with the liberal arts graduate students intent to silence Trump administration officials when his term in office ends. So, the wording in the petition was changed to a demand for new guidelines for Trump administration officials.

Sources with direct knowledge of the matter told the outlet that petition organizers later changed the wording in the petition to say that Team Trump officials should be held “accountable” before they set foot in the prestigious institution.

The change in the language in the documents was likely the result of the opposition to the original, the people told the network.

The Kennedy School’s student council struck down the petition, people with direct knowledge of the matter told Fox Business.

Students at the renowned Harvard Business School also rejected the petition. The liberal arts graduate students want to hold Trump administration officials accountable though there is no definition of what that means.

The petition organizers then changed the wording of the document from an outright ban of Trump administration officials speaking, teaching or attending the university to holding these officials “accountable” before they deal with Harvard in the aforementioned capacities, people with direct knowledge of the matter say. Perhaps the students think that demands for a new set of guidelines specifically drawn up for the Trump officials sound better than an outright ban from campus. These are graduate liberal arts students. The whole point of a liberal arts education is to experience various points of view on a number of topics and learn to discern between what the student believes in and what the student does not. Learning to reason is a big part of the process. Clearly, these students do not have professors who are doing their job. Parents should ask for refunds. Especially at the grad school level, these students are too big of snowflakes to be well-educated.

Republican students are speaking out against such arbitrary bans that violate the First Amendment on campus and pacify students heavily infected with Trump Derangement Syndrome. They have fallen for Democrat talking points that claim Trump is destroying democracy, is a science denier, and is subverting the election process.

The petition organizers then changed the wording of the document from an outright ban of Trump administration officials speaking, teaching or attending the university to holding these officials “accountable” before they deal with Harvard in the aforementioned capacities, people with direct knowledge of the matter say.

Estes is a member of the Kennedy School’s student government and a member of a Republican student group. “Harvard has hosted a number of controversial guests over the years like a fellow from the Palestine Liberation Organization, so we should make broadly applicable guidelines that apply to every speaker, not single out Trump appointees” he added.

Often when an administration leaves office, whether a Republican one or a Democrat one, members of the administration find a home at Harvard. The Kennedy School focuses on government and public policy. It is known for hiring former politicians and political staffers to teach as professors or temporary fellows. The petition says new guidelines are needed because any Trump administration official who hasn’t spoken out against Trump is complicit and not deserving of being on campus. They have disqualified themselves from being hired as a teacher or fellow, you see. The petition states that the students signing on to it hold “a variety of political views” and “remain fully committed to free speech and debate of difficult subjects”. Malarkey.

We hold a variety of political views, but these actions alarm all of us invested in the future of democracy in the United States and abroad. We worry that in following tradition and inviting members of the Trump administration to Harvard, the school would be legitimizing this subversion of democratic principles that up to now had been universally accepted by both political parties. That is why today we are asking you to set up a system of accountability for high-level political appointees and Trump administration consultants before they are invited as fellows or to teach or speak on campus. These accountability guidelines should be publicly shared with students by the end of the calendar year.

Harvard should stand firm with its stated commitments to a just Harvard and a just world, to free and honest inquiry in the unfettered pursuit of truth, the right to vote, a free and independent press, checks and balances, the peaceful transfer of power, and the rule of law with equal justice for all. We believe that Trump administration officials who failed to live up to that standard have disqualified themselves from being hired by the school as faculty or fellows.

Part of ensuring the survival of our democracy means calling to account those who seek to harm it. That is why we are also requesting the school fully vet speakers for their role in undermining these commitments and hold them fully accountable for that complicity. The Institute of Politics at HKS, or any other center, has the responsibility to boldly confront Trump administration alumni invited to speak at Harvard about their collaboration or passive acceptance of this attack on truth and fundamental democratic principles — or not invite them to speak at all.

We acknowledge this situation is nuanced as many appointees and career officials chose to join this administration to pursue the public good in spite of these norm violations. Others might claim to have upheld these norms from within. We are simply asking the school to create and share with students transparent guidelines of accountability that ensure its full commitment to the principles American democracy is built upon.

While the Kennedy School students and the Business School students are reacting appropriately to such censorship, it should be noted that the students of the Harvard Medical School, as well as Harvard Divinity School, are supporting the petition. Prominent public figures are speaking out against the campus version of McCarthyism.

Prominent Republicans blasted the petition as an attack on free speech and open discourse. Alan Dershowitz, a retired Harvard law professor who represented Trump in his impeachment trial, said he would offer free legal help to anyone who would be excluded by new policies.

“Will I be banned from speaking at Harvard?” Dershowitz asked on Twitter.

“I will happily walk back on campus and challenge this,” she told Fox Business. “Censorship should not be tolerated. Our academic communities should be bastions of free speech.”

Dershowitz is a liberal Democrat and a friend of Trump and served as legal counsel to him. The Harvard Graduate Students Union, a labor group that represents campus graduate workers is supporting the petition because Trump officials are “blatantly anti-democratic, anti-science, and anti-labor administration.” The petition states that “Harvard has a duty to “boldly confront” those who were complicit or not invite them to speak at all.” So much for a free exchange of ideas on Harvard’s campus. Conservative speakers have been run off campus for several years. It looks like that will continue.