Is the next Trump to run for office… Lara Trump? 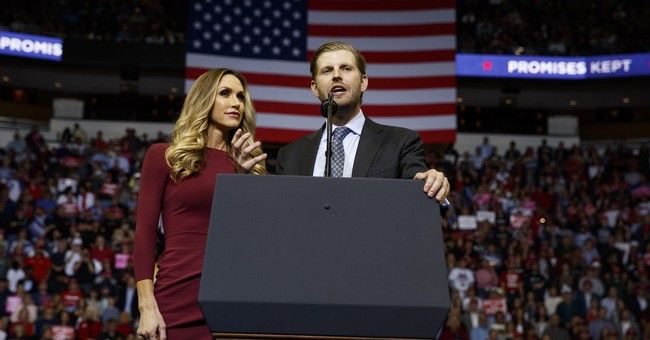 Lara Trump is a native of North Carolina, a Democratic stronghold until shifting demographics and a surge in the number of independent voters turned it into a swing state. Her daughter is named Carolina, after her home state. The president won North Carolina by just 1.3 percentage points, a smaller amount than four years ago. It may be a sign that North Carolina will trend blue in a post-Trump election year. The race will likely be hotly contested and is expected to draw a large field of candidates interested in running for the Senate seat. She would be jumping the line, so to speak, in front of politicians who have been waiting for the opportunity for years. Will Republicans go back to choosing the next person in line as they did in pre-Trump years, or will they remain open to someone who is coming from the outside world, not the political world?

So, who might be Ms. Trump’s competition in a Republican primary race?

There’s Representative Mark Walker, a Trump ally whom the president has encouraged to run for Mr. Burr’s seat, and indicated he would support. There’s Pat McCrory, the former governor, who has said he is eyeing the seat. Tim Moore, the North Carolina speaker of the House, is said to be in the mix. And Dan Forest, who just lost a race for governor against the Democratic incumbent, Roy Cooper, is expected to be in the field.

And then there is another contender from the president’s inner circle, at least as it stands at the moment: Mark Meadows, the former North Carolina representative and White House chief of staff, is widely expected to move back home and run for the seat as well. Aides to Mr. Meadows declined to comment about his political future.

I assume that Trump would endorse his daughter-in-law over his ally, Mark Walker if they both run. Will Mark Meadows be popular enough to win a primary with many other candidates? He endorsed a candidate in the primary race to fill his vacant seat in the House when he went to work in the White House, but that person didn’t win. It’s not clear he has garnered enough attention as White House chief of staff to be considered the best candidate in the Senate race. Perhaps he could get the old band back together and get endorsements by some well-known members of the Freedom Caucus in the House which he used to lead.

Lara Trump proved herself to be the surprise star from the Trump family during the president’s re-election campaign. She has a resume that includes personal trainer, and television producer for Inside Edition. She and Eric have two very young children. She was a senior adviser on the Trump campaign and active with the Women for Trump group.

“She’s very charismatic, she understands retail politics well, and has a natural instinct for politics,” said Mercedes Schlapp, a Trump campaign adviser who traveled the country as a surrogate alongside Ms. Trump. “In North Carolina, in particular, she’s a household name and people know her. She worked really hard on the campaign and was very involved in a lot of decisions throughout.”

Past predictions usually pointed to Donald Trump, Jr. as the next generation of Trumps to run for political office. Some speculation has included suggesting Ivanka might run for office but that always seemed unlikely. Both Ivanka and Lara were deployed by the campaign to appeal to women voters – Ivanka to suburban women, Lara to other areas. Lara is said to be good with people on the campaign trail.

“She would be formidable,” said Kellyanne Conway, a former White House official and the 2016 Trump campaign manager. “She has the trifecta: She can raise money, raise awareness of key issues and raise attention to her race. Unlike many typical politicians, she connects with people and is a compelling messenger.”

A poll was commissioned by the Club for Growth to determine Lara Trump’s potential support if she runs for office. At that time, it was to run in New York’s Second District. It was all hypothetical, Lara Trump never expressed any interest in making that run. Still, she won by 30 points.

The Club for Growth, an influential conservative anti-tax group, earlier this year commissioned a poll with Ms. Trump as a candidate for Congress representing New York’s Second District.

David McIntosh, the president of Club for Growth, said at the time that the group simply polled her name to show there was a well of support and lure her into an open race.

In a hypothetical primary, the poll showed her winning by 30 points.

Stranger things have happened. It may never come about but in the meantime, it’s fun to speculate on future races since we all know the 2022 election season has already begun.