This was after liberal hacks in the media urged Kayleigh and the Trump campaign to concede to the senile old man who didn’t campaign much but, according to the media, defeated the most popular pro-American president in US history in the November election.

Kayleigh reminded the liberal hacks on Friday that Democrats and their cheerleaders in the press NOT ONCE made President Trump’s first term a living hell not just during the campaign but for the next four years. 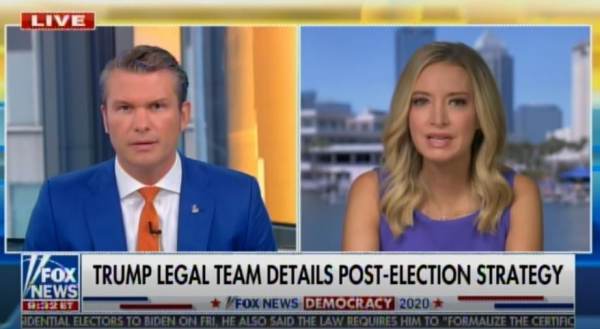 Kayleigh reminded Pete of the horrific treatment this president received after the 2016 election.
And, Kayleigh added this on the continued investigation of the fraud in the 2020 election.

Kayleigh McEnany: You know that Dominion in that one county where 7,000 votes were changed and we’re looking into that. And certainly we are looking at the evidence there but the equal protection claim is the really strong one and I believe the winning one at this moment.

The Equal Protection Clause from the 14th Amendment, which took effect in 1868, provides “nor shall any State … deny to any person within its jurisdiction the equal protection of the laws”. It mandates that individuals in similar situations be treated equally by the law.[

Pete Hegseth did an amazing job in his interview with Kayleigh.

Via FOX and Friends Weekend: