Outside of almost every single on-air CNN personality, is there anyone more ethically-plagued and partisan than MSNBC’s ReidOut host Joy Reid?

Whether it’s her claims of having been hacked or recent (and lazy) lies about Antifa or Republicans as murderers, she has quite the resume. Thursday’s show was no exception as, among other pontifications, Reid said Trump’s legal team was guilty of “sedition,” insisted Republicans only support the rich, and decried the Senate filling executive and judiciary vacancies.

And that doesn’t even cover things her guests said (including Al Franken lecturing Republicans about ethics).

Below is a Notable Quotables-style mishmash of moments, presented in chronological order. 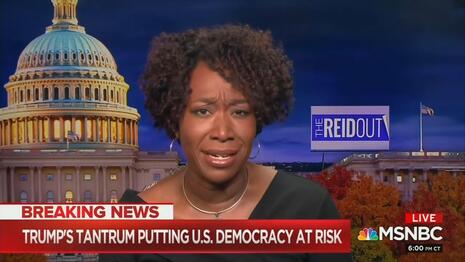 “I am a man more sinned against than sinning. It will be easy to imagine those words coming out of the mouth of our own Mad King, Donald Trump, as he stalks the halls of a White House in rage of petulant tantrum over losing the election in a landslide to Joe Biden, muttering to himself about treason and screaming specious allegations about fraud. But those are not words of Trump. That is William Shakespeare’s King Lear, because that is where we’ve arrived. But Trump’s mad king is far more insidious…And at this point it’s hard to argue with lifelong Republicans like Stewart Stevens, who are calling it sedition…[W]e just need one Republican, just one, to also tell him no and they won’t do it.”

“[W]hat they’re saying is that any president elected through a majority decision by non-white people is, by definition, an invalid president. They did it with Barack Obama. They’re now doing it with Joe Biden. They’re simply saying that because of where Biden won, he is not allowed to be president and they can then, as David just said, hold his presidency in abeyance for four years.”

“And the last thing I’ll say as a historian, these situations can be really, really explosive. When we saw in 1824 an election where there was questions — there were questions about the validity of votes over cast and how they turned out and that wound up destroying a political party — an entire political party. In 1860, that wound up nearly destroying the country itself. We’re talking most mostly ends that are that extreme, but we’re playing with dangerous things right now.”

“When you have a president that is delegitimized and, you know, an electorate that has shown the willingness to do acts of violence on Trump’s behalf, if you think about people like Cesar Sayoc, it presents a danger to the incoming president and then, secondly, you have a likelihood of social upheaval when people who have a majority of the will, the will of the public, cannot be expressed through the mechanisms of government and that is a recipe for social turmoil.”

Constitution Is Allowing ‘Minority Rule’ to Ruin America, Keep Dems From Fixing Us

“[T]he project here is to take minority rule at the state level and engineer it to claim veto power at the federal level and in many ways, one of the most important results of the 2020 election, maybe not what happen in the Senate or even the presidency, but what didn’t happen at the state legislatures. So you have a situation in Pennsylvania, Michigan and Wisconsin where a majority of the vote translates into a minority of the seats, in the state legislature and therefore in Congress and a majority and vice versa, minorities rule, majorities do not. And I think to understand what is going to happen in this country over the next decade, the failure to correct those changes — those balances in those three states is really — is really significant because maybe we don’t have a swift recovery from coronavirus, maybe there is — there are some losses in the election of 2022 for the party of the president, maybe Republicans need just a little bit more of an edge to be able to hold veto power in Congress really through the decade.”

“[B]ut what the protection of minority rights in the Constitution actually does is present a situation where you can, in bad faith, game it to ensure what we’re now seeing as a kind of minority rule and so we’ve seen, that in the previous election, Hilary Clinton won by about 3 million in the popular vote, lost in the Electoral College.”

Republicans ONLY Care About the Rich?!

“[W]hat they want to do with that power, I think, is clear. They want to enrich the very rich. They want to give corporations a veto power over the regulation of themselves. They want to ensure that no one ever taxes extremely wealthy people. They don’t care about these sort of ordinary Trump voters.” 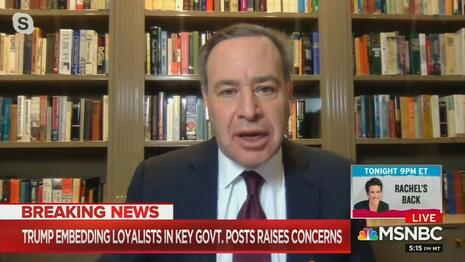 We Need a MASSIVE Investigation into the Entire Trump Administration….

“[O]ne thing I think we are going to need when this is all over is outside the party system is some kind of investigation of exactly what happened. I talked in that thread you were kind enough to cite, what the need to think about the future not in bipartisan terms but in non-partisan terms, because one of the parties is broken in its commitment to democratic norms…[W]e have to get to the bottom of exactly what happened in the Trump years. There are so many things that we should know that we just don’t and your point about who the people are and how they got into positions, the question of records left behind by the Trump administration, were any of the records were tampered with, and what exactly we’re the financial obligations of the then-President through the Trump presidency. Those are questions that need an answer if the country is ever going to move forward in a safe way.”

….But the GOP Are the Ones Ignoring Struggling Americans by Filling Judgeships!

“Where is the Grand Old Party that used to preach the virtues and values of the Constitution? Where are Senate Republicans as Trump and his conspiracy theorist lawyers take a flame thrower to democracy by openly subverting the will of 80 million voters? Well, right now, they’re gorging themselves on power, stuffing the Federal Elections Commission, Federal Reserve Board, and the courts, with their appointees, before President-elect Biden shows up and turns off the spigot…Meanwhile, millions of Americans are in desperate need of help because of the coronavirus and, clearly, the GOP thinks they can wait. Let them eat judges.”

Reid: “So, this is what we’re doing. Republicans don’t care about democracy. They hate elections, because they don’t always win and they are watching Donald Trump burn down the house so get more judges and stack the Federal Reserve board with people, and 33-year-old unqualified judges. Is that the same Republican, Senator cohort that you knew?”

Franken: “Yes. They’re a disgrace. The longer that they refuse to acknowledge that Joe Biden won, you know, fairly, the more Republican base is going to buy into the fiction that this was rigged, and that undermines democracy, and that causes lasting damage.”

Irony: Franken Insists GOP Senators Are the Ones With Ethics Problems

“[T]he Republicans secretary of state of Georgia said that Lindsey called him and asked him basically to get rid of some legal votes and then Lindsey denied that and that, unfortunately, there was another person on the phone, who’s a witness to that….You know, if this were like a murder, he’d be in a lot of trouble and, yes, it’s an ethic investigation and there should be and if he’s lying, which, you know, he’s get due process. But this is really serious.” 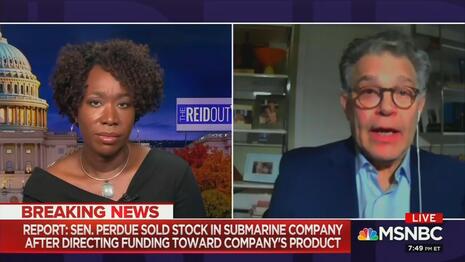 Reid: “There’s also ethics investigations — there’s also some accusations of ethics violations of two sitting senators, Kelly Loeffler for violating ethics rules with making fundraising pitches to try to get her a seat…She also of course sold stock at a beneficial time for her after she got the briefings about COVID. David Perdue helped the defense contractor and sold off stock at a beneficial time for him when they both found out how bad COVID was…[D]o you agree with David Frum that we have one political party and sort of a mafia on the other side that just wants to try to get minority rule for completely unethical people?

Franken: “I split the difference. We have two political parties. One is kind of a mafia and this is — look, you know, it’s crazy senators have stocks in any stocks — you know, they should have mutual funds or, you know, exchange traded funds. That’s what I had. I mean, that’s what you should have, man. Yeah, what — what Perdue did was vote on something and then immediately sell a stock in the defense contractor that he helped and what Loeffler was awful. It was — she sold she had privy information to a — to a crisis, and sold, you know, the COVID crisis and sold stock, sold hotel stocks.”