Who is the shepherd? Sunday reflection 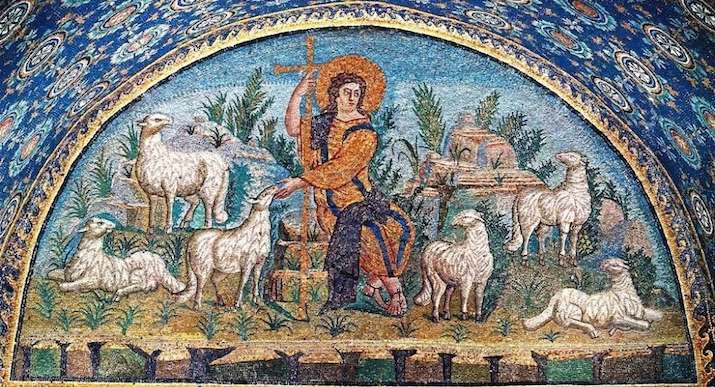 Jesus said to his disciples:

“When the Son of Man comes in his glory, and all the angels with him, he will sit upon his glorious throne, and all the nations will be assembled before him. And he will separate them one from another, as a shepherd separates the sheep from the goats. He will place the sheep on his right and the goats on his left. Then the king will say to those on his right, ‘Come, you who are blessed by my Father. Inherit the kingdom prepared for you from the foundation of the world. For I was hungry and you gave me food, I was thirsty and you gave me drink, a stranger and you welcomed me, naked and you clothed me, ill and you cared for me, in prison and you visited me.’

“Then they will answer and say, ‘Lord, when did we see you hungry or thirsty or a stranger or naked or ill or in prison, and not minister to your needs?’ He will answer them, ‘Amen, I say to you, what you did not do for one of these least ones, you did not do for me.’ And these will go off to eternal punishment, but the righteous to eternal life.”

What exactly is faith and the caritas/agape form of love? Those are central questions for any Christian seeking discipleship, questions for which our readings today give us clear answers. Faith is more than knowledge, and love is more than just a feeling. In both, Jesus calls us to active participation in the Lord’s work, and perhaps makes it clearer in Matthew’s Gospel reading than in anywhere else in the scriptures.

“The Lord is my shepherd,” reads Psalm 23, “there is nothing I shall want.” Today’s responsorial relates directly to our readings today by explaining the Lord’s relationship to us as a basis. God is pure agape, the self-giving and self-sacrificing form of love (as opposed to eros, philia, storge, and other classical Greek distinctions). The best model for that kind of self-sacrifice in Old Testament times was a shepherd, a role that required extraordinary self-sacrifice and hard work to accomplish well.

The image of shepherds goes all the way back to Genesis. In Gen 49, Jacob is called “the Shepherd, the Rock of Israel”; in Exodus 27:17, Moses asks the Lord to lead the Israelites into the Promised Land so “that the congregation of the Lord may not be as sheep which have no shepherd.” In 2 Samuel, the tribes of Israel pay homage to David, declaring that the Lord told him, “You shall be the shepherd of my people Israel.”

David’s psalm makes the first direct mention of the Lord as a shepherd, but hardly the only one. In our first reading from Ezekiel, the Lord uses that imagery explicitly, declaring Himself the shepherd and His people “my sheep.” The Lord doesn’t anticipate that being a relaxed proposition, either:

I will rescue them from every place where they were scattered when it was cloudy and dark. I myself will pasture my sheep; I myself will give them rest, says the Lord GOD. The lost I will seek out, the strayed I will bring back, the injured I will bind up, the sick I will heal, but the sleek and the strong I will destroy, shepherding them rightly.

It’s clear that God Himself sees agape love, that which exists within the Trinity and to which we are called for salvation, as an active force. It is not merely just having or expressing loving feelings while letting matters play out passively. God seeks us out as a shepherd would a lost lamb from a flock. He sends the prophets and the scriptures to us to call us back to Him.

And finally, He sent His Son to us as well, who embraces the shepherd imagery again. Jesus makes mention of shepherds in this parable, which is notable for its directness and for Jesus’ immediate explanation afterward. In fact, it’s barely a parable at all, as Jesus dispenses with the trappings of parables to teach directly on the mission of His disciples in salvation.

What are we all called to do in this passage? We are called to welcome the stranger, clothe the naked, give sustenance to the hungry and thirsty, and attend the sick and imprisoned. What do those tasks resemble? They resemble the responsibilities of a shepherd, whose duty is to find the lost, feed the flock, take care of its ill and injured, and free the trapped among them. We are called to take action in faith and in this world — to intercede where there is injustice or disfavor, to bring the herd back together in harmony with the Lord.

Being a disciple is, therefore, a much more active role than just being sheep. The sheep must also become shepherds themselves, not just out of duty but out of love — the kind of agape/caritas love that calls us to self-sacrifice even for those whom we do not know, or even for those who hate us. If we have not done that much for the Lord, acting as shepherds for His flock, then Jesus warns that we will not be known to Him at the last accounting.

This underscores that faith is active, not passive, and not just grounded in feelings but in our role in advancing the knowledge of salvation in this world. To truly know and accept Jesus is to take His yoke on our shoulders in the Great Commission. More than that, it is to love God’s sons and daughters as God loves them, even if we don’t or if they don’t love us. To love in that manner brings us closer to God as we align our wills to His, which itself forms us ever more to live within the Trinitarian caritas for eternity.

Image from the mausoleum of Galla Placidia, Ravenna, Italy (425-50 AD).

“Sunday Reflection” is a regular feature, looking at the specific readings used in today’s Mass in Catholic parishes around the world. The reflection represents only my own point of view, intended to help prepare myself for the Lord’s day and perhaps spark a meaningful discussion. Previous Sunday Reflections from the main page can be found here.