Breaking: Powell goes under the bus?

Well, this is awkward. Remember that presser on Thursday, where Sidney Powell stood shoulder to shoulder with Rudy Giuliani and claimed she had evidence of a communist plot to steal the election from Donald Trump? And suggested that Republican candidates might have paid off Dominion to “win” their own elections?  About an hour ago, Giuliani sent out a statement through the Donald Trump campaign that, er, Powell has nothing to do with the campaign or Trump: 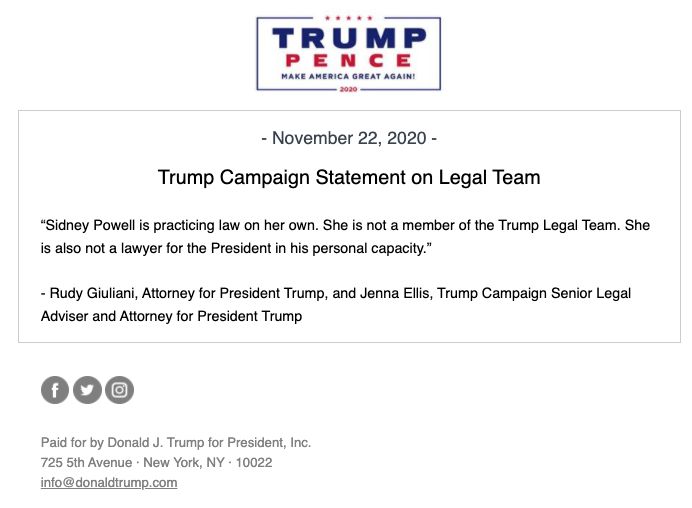 What? They don’t want to be associated with the “biblical” lawsuit Powell claims she’s ready to file in Georgia? Shying away from the whole “devil went down to Georgia” theme that the Trump campaign seemed to be adopting?

To call this sudden is an understatement. After Powell’s escalating allegations of worldwide conspiracies — including Bernie Sanders knuckling under to Hillary Clinton in 2016 — GOP Rep. Liz Cheney demanded that Powell “put up or shut up,” meaning produce evidence immediately for her charges. Trump defended Powell and attacked Cheney for her demand that Trump accept defeat:

Sorry Liz, can’t accept the results of an election with hundreds of thousands of fraudulent votes cast, enough to easily flip the Election. You’re just unhappy that I’m bringing the troops back home where they belong! https://t.co/elZ9X3wrAz

More to the point, however, it was Giuliani who put Powell on the stage with him on Thursday. That was a campaign presser, called by Giuliani to shore up their position in challenging the results of the 2020 election, even while losing on almost every front. Powell’s theory might be lunacy, but it’s about the only theory that even attempts to explain why Trump hasn’t conceded. Giuliani’s sophistry about percentages and analytics still falls far short of the scale needed to seriously question the overall result.

The big question is why they’re even bothering to distance from Powell. She may be nuttier than Giuliani, but that’s more a question of scale. Powell clearly angered Trump’s allies within the GOP by accusing them of paying off communist overlords to win their elections, and she’s been oddly hostile to anyone asking for a peek at her case — even normally friendly outlets. Did Giuliani finally demand to see Powell’s work and get shined on by Powell? Or discover that Powell doesn’t have any evidence at all?

Trump might still tweet about Powell, but today’s sudden distancing from Powell suggests that the campaign has had enough of the insanity.

As we have been warning for the last couple of weeks — don’t believe anything claimed in press conferences and interviews. When attorneys present evidence in court, then take it seriously, but even then, scrutinize it to see whether it holds up. Giuliani just took a beating in Pennsylvania and bailed out of Michigan to avoid another legal beating. This apparent ejection of Powell from the team after featuring her three days ago makes this look even more like a clown show rather than a Dream Team.