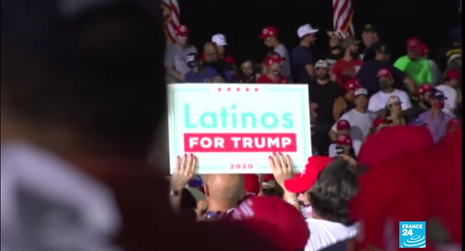 The New York Times remains dumbfounded by Donald Trump winning the state of Florida, especially Trump taking a significant share of the Hispanic vote in South Florida regions like Miami. Unable to accept reality, the paper’s reporters have been lashing out, especially their Miami bureau chief Patricia Mazzei, who was at it again in Sunday’s lead National section story, “How Miami’s Politics Swung Right and Blindsided the Nation.”

Mazzei is unable to escape the cliché that “Latino” equals “Democrat,” and used liberal views as a default baseline, then questioned Cuban Americans for straying from that line. The paper has never gotten its head around the fact of Cuban Americans voting Republican because of their anti-Communist beliefs, often earned under direct experience under Cuban tyrant Fidel Castro.

She traced the evolution of Republican Mayor of Miami-Dade County, Carlos Gimenez, who reversed the county’s “sanctuary” for status for “undocumented immigrants.” Mazzei was harsh:

Critics said he had kowtowed to Mr. Trump and turned his back on the county with the second-highest number of immigrants in the nation, after Los Angeles.

This year, Mr. Gimenez received Mr. Trump’s endorsement, spoke at one of his rallies and was elected to Congress.

His remarkable political evolution mirrored a broader shift in Miami-Dade, where 58 percent of the electorate is Hispanic and Mr. Trump made huge inroads from 2016 to 2020….

Voting Republican is a problem:

….No other place has quite the same mix of Republican-friendly Hispanics, led by conservative Cuban-Americans. And the Trump presidency has strengthened their hand, forcing Miami to reckon with hard and contradictory truths about immigration, racism and power.

Mr. Trump’s stunning improvement here shocked not only the nation but also much of Miami, a city that likes to think of itself as the forward-looking capital of Latin America….Every local institution has been shaped by immigrants and their children, who have tended to lean more and more liberal with each passing generation.

And yet many residents have come to the difficult realization that Miami even now is not quite as progressive as they had hoped.

“We used to be more compassionate,” said Carmen Peláez, a Cuban-American playwright and filmmaker who campaigned for Mr. Biden.

Another warning sign? Failure to join this summer’s protests (many of which descended into looting and violence).

Some reckoning took place over the summer, when it became evident that relatively few Latinos, especially Cuban-Americans, were showing up at local protests against police brutality that mirrored others across the nation, causing consternation among more liberal Hispanics.

At least the Times is using the “liberal” label – but why does every political stand have to be run by “liberal Hispanics” for approval? She again blamed “misinformation” for Latinos voting Republican.

Mr. Trump’s campaign succeeded in South Florida for understanding many of those complexities, as well as for a variety of other reasons: He visited often. Republicans effectively branded Democrats as “socialists.” A vast misinformation campaign targeted Spanish-speaking voters. Mr. Biden failed to reach out to Hispanic voters until it was too late.

It did not help Democrats that, during the summer’s Black Lives Matter protests, some demonstrators in Miami waved flags depicting Che Guevara — a brutal revolutionary despised by Cuban exiles — and defaced a Christopher Columbus statue with graffiti of a Soviet-style sickle and hammer.

Mazzei has pounded on the Florida puzzle before. A post-election story betrayed bitterness about Joe Biden’s surprisingly big loss in Florida and dug up a pathetic excuse: Hispanics were the victims of “racist” “disinformation,” according to reporters Mazzei and Nicole Perloth. And calling “moderate” Biden a “socialist” was not an opinion, but a “lie.” A previous story by Mazzei and Jennifer Medina willfully miscategorized conservative opinion and campaign hyperbole as “misinformation” and dangerous falsehood.