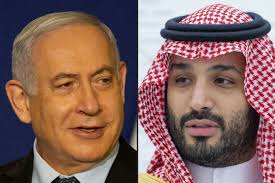 President Trump is one of the most consequential presidents in American history. He accomplished great good under constant attack, including from enemies at the FBI, the CIA, and the National Security Council from day 1 of his administration. I am referring to the Russia hoax, of course, and to the related impeachment hoax, but there is much more.

It turns out that Trump’s diplomacy has unleashed previously unthinkable progress toward peace in the Middle East. The contrast with the Obama administration on this score could not be more striking. Obama aligned the United States with the “Death to America” folks running the Iranian regime and financing terrorism around the world. Indeed, Obama chipped in a fortune to support them.

In the first visit of its kind, Prime Minister Benjamin Netanyahu traveled to Saudi Arabia on Sunday, where he met with Crown Prince Mohammad bin Salman and US Secretary of State Mike Pompeo, an Israeli official told Hebrew media on Monday.

Netanyahu was on the ground in Neom, a Red Sea city, for five hours for the first known high-level meeting between an Israeli and Saudi leader. He was accompanied by Mossad intelligence chief Yossi Cohen, according to the reports.

Pompeo earlier on Monday said he had held a “constructive” meeting with Saudi Arabia’s crown prince the night before, as he wrapped up a seven-nation tour that included stops in Israel and Gulf nations. He made no mention of the reported presence of the Israeli leader.

“Pleasure to meet with Saudi Crown Prince Mohammed bin Salman. Our security and economic partnership is strong and we’ll continue to harness it to advance efforts to counter malign Iranian influence in the Gulf, economic goals under the Vision 2030 plan, and human rights reform,” tweeted the top American diplomat, describing the meeting as “constructive.”

There was no confirmation of the reports from Israel, the US or Saudi Arabia. However, in a hint at the trip, an aide to Netanyahu tweeted a report about Defense Minister Benny Gantz launching a probe into a naval acquisitions scandal, writing that “Gantz is playing politics while the prime minister is making peace.”

Senior Hamas official Sami Abu Zuhri demanded an explanation from Saudi Arabia, calling the alleged visit “an insult to the nation and an invitation to attack Palestinian rights.”

The Kan public broadcaster reported that the talks focused on Iran and the incoming Biden administration.

Netanyahu and Cohen traveled to Saudi Arabia on the private plane of businessman Ehud Angel — the same jet that the prime minister used for a covert visit to Oman last year, according to Kan.

The reports came after Twitter users noticed that a private jet had made a rare trip between Tel Aviv and Neom on Sunday evening, sparking speculation of a high-level meeting.

However, it appears the talks did not yield results.

The Wall Street Journal reported that an anonymous “Saudi government advisor” said that Netanyahu and bin Salman discussed Iran and normalization, but reached no agreements.

The Saudis’ position, apparently, still remains opposed to normalization without a peace agreement between Israel and the Palestinians.

Saudi Arabia’s Foreign Minister Prince Faisal bin Farhan Al Saud said Sunday, “We have supported normalization with Israel for a long time, but one very important thing must happen first: a permanent and full peace deal between Israelis and Palestinians.”

One can only hope there is more to come.