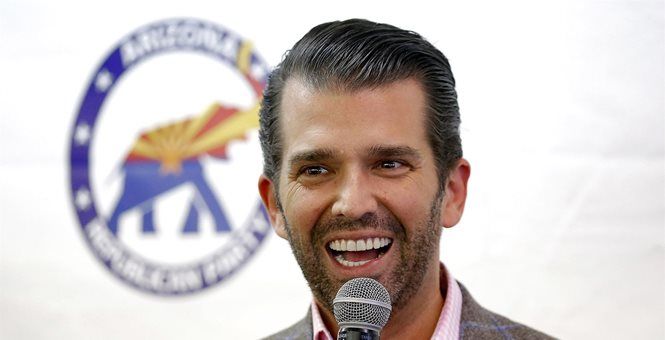 Kudos to Donald Trump Jr, who’s recovering from COVID-19 at the moment, for grasping the stakes rather than grasping at straws. In a tweet this morning, Don Jr blasted calls for a boycott of the runoff elections in Georgia as “NONSENSE,” and urged his followers to “IGNORE those people.”

Does Don Jr know the calls are coming from inside the house, so to speak?

I’m seeing a lot of talk from people that are supposed to be on our side telling GOP voters not to go out & vote for @KLoeffler and @PerdueSenate.

We need ALL of our people coming out to vote for Kelly & David.#MAGA #GASEN

Well, who exactly is it calling for a boycott of the runoffs? Lin Wood for one, whose most famous client at the moment is Donald Trump, Sr:

President Trump’s attorney has suggested to voters in Georgia, where two Senate runoff elections are due to take place in January, they should hold off voting for two Republican Senators until they are seen to be doing more to help the president fight to overturn the 2020 election result.

Lawyer Lin Wood stated in a tweet that Georgia senators, David Perdue (R-GA) and Senator Kelly Loeffler (R-GA), did not deserve the backing of voters in the forthcoming special election until they started to demand action for apparently ‘voter fraud’ in the state of Georgia.

‘Politicians love votes & money (not necessarily in that order). Want to get @SenLoeffler & @sendavidperdue out of their basements to demand that action must be taken to fix steal of the 11/3 GA election? Threaten to withhold your votes & money. Demand that they represent you,’ Wood tweeted on Sunday.

It seems odd to credit someone for restraining the impulse to carve off one’s nose to spite one’s face, but that’s where we are at the moment. Both Wood and Sidney Powell have done their level best to undermine Georgia’s electoral system and MAGA-friendly Republican administration at just the time when Republicans need a yuuuuuuge turnout in Georgia to keep a restraint on a Biden administration. They are casting Trump-friendly Republican candidates as crypto-Deep State operatives, which if successful would have the effect of … [checks notes] putting Kamala Harris and Chuck Schumer in charge of the Senate.

How does that help keep the swamp at bay? Especially with a Democrat in the White House?

Seriously, though, kudos to Don Jr for a rare bit of common sense and sanity out of the Trump campaign. Perhaps he could have a word with his father about linking up with Wood and Powell, or for that matter Giuliani too. It’s time to focus on what can still be won, not burn it down out of spite.

I’ll give my pal and Townhall colleague Kurt Schlichter the last word. Best wishes to Don Jr and his family for a quick recovery, too.

We all need to have zero tolerance for dipshits who tell people to refuse to vote. https://t.co/j1jhTZoMQx