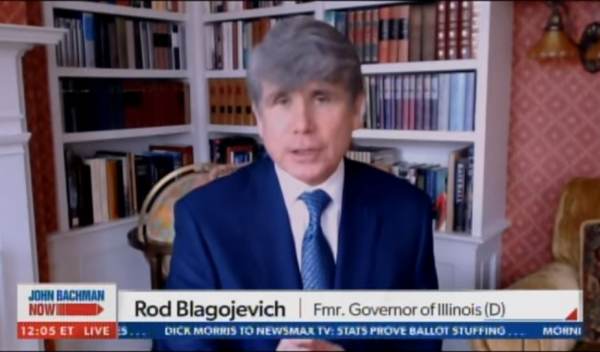 Former Illinois Governor Rod Blagojevich was on Newsmax again on Tuesday.
And once again Governor Blagojevich defended President Trump and his legal team.

Blagojevich, a former Democrat governer, believes the election was stolen from President Trump and he openly admits it.

Rod Blagojevich: President Trump has a constitutional duty to make sure their is election integrity in our voting systems. And the voting is overwhelming. I should say the allegations of the wrongdoing is overwhelming… The evidence will be there. They’re going to find it because of the statistical anomalies of the case as well as the unlikelihood, the improbability that you can be ahead by 800,000 votes in Pennsylvania, or a little less than that, with 63 percent of the vote in and then somehow you lose?… It would be wrong I think for them to fight this case exclusively in the court of public opinion. And you have to be very sensitive to the courts and respectful to the court process. If they show their cards too soon the corporate media that’s in a conspiracy to destroy Trump and destroy his presidency they’re trying to ratify what is in my belief, a corrupt election. They’re going to be all over the place trying to take away the arguments that Trump’s people have… So it would be imprudent I think for the Trump team to do too much of this publicly.

TRENDING: F-E-L-O-N-Y. — Lin Wood Drops Late-Night Bombshell: “Would someone ask my never-to-be friend Brad Raffensperger @GaSecofState if he has seen this tape of election fraud at State Farm Arena in Fulton Co., GA?”