Seattle: Another 34 police officers leave as downtown businesses report an increase in crime 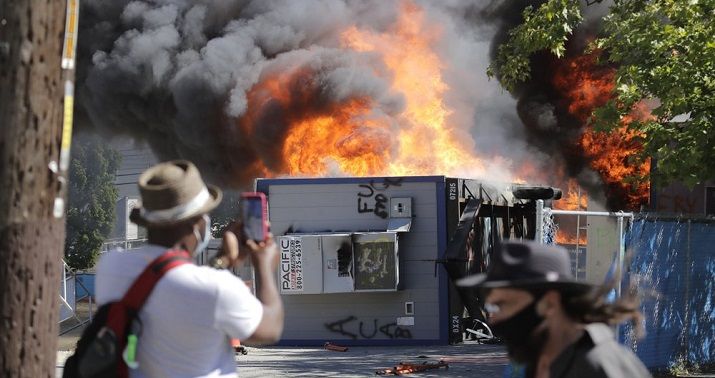 As I write this the Seattle City Council is once again deciding how much to cut from the police budget in 2021. Jason Rantz reports the expectation is that the cuts will amount to 17% of the budget. Meanwhile, officers continue to leave the force in record numbers:

While the Seattle City Council is poised to cut the police budget once again, the mass exodus continues with at least 34 more officers having separated from the department.

The newest staffing data puts the number of officers leaving Seattle in 2020 at 144 and counting. This is historically high…

“I am sad and yet, I’m not surprised that many of the great human beings that do the job of policing in Seattle are still leaving SPD at an alarming rate,” Seattle Police Officers Guild (SPOG) President Mike Solan tells the Jason Rantz Show on KTTH. “It saddens me because I’m witnessing a professional police agency revered by many fall victim to radical activism that is swallowing Seattle.”

While this is happening, crime is up in the city. A recent survey of small business owners downtown found 75% of them had seen an increase in crime this year:

Of the nearly 100 businesses surveyed, more than 75 percent of owners reported an increase in crime between April and September compared to the same time frame last year. More than 50 percent said that their employees don’t feel safe working in Ballard. One of the more shocking statistics unveiled by the survey alleges that 7,000 “instances of crime or criminal activity” were experienced by the 88 businesses – an average of 40 each day…

“In Ballard, our employees are plagued by habitual shoplifters and harassment,” said Ken Mahoney, Bartell Drugs Sr. Vice President of Operations. “Recently, our Ballard assistant store manager was assaulted. Consequently, we have had to make significant investments in private security guards to protect our employees and customers as a result of the increased incidences of crime and violence in the neighborhood.”

Why would activists and City Council members keep pushing to slash police budgets when this is happening? Writing for City Journal, Christopher Rufo argues it’s based on the new, utopian view of policing that has been adopted by the far left. In short, many of the people demanding cities “defund the police” weren’t kidding.

In the progressive narrative, American police forces were established to catch fugitive slaves and have acted as the guardians of white supremacy ever since. As the activist group Decriminalize Seattle argues: “The police have never served as an adequate response to social problems. They are rooted in violence against Black people. In order to protect Black lives, this moment calls for investing and expanding our safety and well-being beyond policing.”…

According to a set of leaked documents that I obtained from inside the King County Executive’s Office, policymakers have laid out the rationale for permanently closing the region’s largest jail and ending all youth incarceration—including for minors charged with serious crimes such as rape and murder.

The documents cast the prison system as an institution of “oppression based on race and built to maintain white supremacy.” In a pyramid-shaped graphic, policymakers claim that crime and incarceration are merely the “tip of the iceberg.” On a deeper level, the justice system is rooted in “white supremacist culture,” “inequitable wealth distribution,” “power hoarding,” and the belief that “people of color are dangerous or to be feared.” Once these premises are established, the conclusion is foregone—white supremacy must be eradicated. To this end, days after I released the internal documents, King County Executive Dow Constantine announced a plan for terminating youth detention and closing the downtown Seattle jail, which represents approximately two-thirds of the county’s jail capacity. More than half of all inmates are incarcerated for violent crimes; the plan will release such violent criminals onto the streets.

We’ll shutter the jails and simply live in an idyllic paradise where bad things don’t happen. Meanwhile, look at this list of the kind of calls Seattle PD actually responded to last year and tell me whether having fewer police to handle and investigate these crimes and more people who actually commit the crimes back on the street is a good plan:

■ 17,055 theft calls (not including the thousands of shoplifts that are reported online and do not get a police dispatch);

■ 1,409 reports of children who had been abandoned, abused, molested or neglected.

Seattle seems determined to turn the city into a place where more crime happens and fewer people are held accountable when it does. I don’t live there so I get to watch how this experiment in policing works out from afar. So far it looks like ideological extremism is creating a slow-motion train wreck that should be completely avoidable.