I am having a nightmare…and I can’t wake up

There is some good news today, but the nightmarish dimensions of the problems facing the American Republic are also coming into horrifying focus.  Alcoholics and others who embrace a 12-step solution to intractable addiction problems tell us that we have to hit bottom before we can take effective action.  Well, the nightmare unfolding may be our collective version of hitting bottom and recognizing the real problem.

Despite the media chorus and the likes of Chris Christie urging capitulation, the lawsuits contesting key states are alive and well, and following the legal and constitutional channels.

The developments were announced by Trump campaign senior legal counsel Jenna Ellis, who said the GOP-led Michigan House would hold its hearing at 9 a.m. on Wednesday.

WUMW (an NPR station in Milwaukee):

In this week’s Capitol Notes, WUWM’s Marti Mikkelson asked JR Ross of wispolitics.com what happens next.

“Well, this is all about going to court.  Traditionally in Wisconsin, when you have a recount, all you do is take the ballots and feed them back from machines and count a second time. That’s not what the petition that the Trump campaign filed. It’s more about trying to disqualify tens of thousands of ballots that were cast by people who are following the orders or the advice, the directions, they were given by state and local election officials,” says Ross.

The Trump campaign has several different arguments it is trying to bring before the courts but all center around procedural matters of absentee voting that have been in place since before the 2016 election.

“The Trump campaign is arguing that these voters did not follow the letter of the law, therefore their vote shouldn’t be counted. That’s kind of an unusual request and I don’t know how far it’ll get with the courts but that’s where we’re heading eventually,” he says.

Shipwreckedcrew, a veteran former federal prosecutor, writes in RedState: “The Trump Campaign Has a Very Real Chance to Overturn the Election Result in Georgia.”

For anything to have even a remote chance of changing when it comes to the outcome of the Electoral College, the current status of Pennsylvania, Wisconsin, and Georgia must change. …

[T]he approach seems to be a normal election contest that will take place in Georgia state court, and the evidence may be coming into focus that gives the Campaign a legitimate chance to reverse the outcome.  The margin of Biden’s win in Georgia is only 12,500 votes, and the Trump campaign has requested a machine recount which they are entitled to under Georgia law given the narrow margin.  After that, I am expecting that the Campaign will file a Petition to Challenge the election as explained in more detail below.

After some confusion, it looks as though the Trump recount effort is aligning with the Loeffler/Purdue campaigns, on which depends control of the Senate and the fate of the Republic, probably.  Newsmax:

Sens. David Perdue, R-Ga., and Kelly Loeffler, R-Ga., endorsed President Donald Trump’s call for a second round of the election results in the state, insisting on a signature match of absentee ballots with those on voter registration lists.

After some strife and confusion, it is now being acknowledged that two different theories of election fraud are being independently followed by the Trump legal team headed by Rudy Giuliani, and the Sidney Powell independent effort pursuing the voting machine fraud.  Breitbart reports:

Monday, during an appearance on Fox Business Network’s “Lou Dobbs Tonight,” Trump attorney Rudy Giuliani responded to a question about his team’s decision to announce a break with Sidney Powell on Sunday.

Giuliani attributed it to his pursuit of a different theory than Powell’s approach and proceeded to lay out his effort.

These efforts are all crucial.  If they succeed, and President Trump prevails in proving and obtaining effective remedy for the stolen election, then the following nightmares can be addressed.

The most important United States attorney is the one heading the Washington, D.C. district.  That important post is currently occupied by an acting U.S. attorney named Michael R. Sherwin,  not confirmed by the Senate.  And he is declining to investigate an outrageous, murderous attack on a sitting United States senator.  Rand Paul tweeted yesterday:

The DC U.S. Attorney today confirmed to me that they will not pursue an investigation of who is funding the thugs who attacked my wife and me and sent a DC police officer to the hospital. https://t.co/abpESDJ4nx

Reports indicated that some of the thugs were followed to expensive hotels, making it obvious that they enjoyed funding from unknown sources.  Nothing could be more destructive of our political order than organized bands of thugs, financed and dispatched to where “muscle” is needed, with their backers enjoying immunity.  Does the word “brownshirts” mean anything to you?  (Kids, check Duckduckgo.)

David Horowitz has written a defining account of how the Democrat party came to be taken over by the hard left, intent on turning the Republic into a one-party state where dissent is punished — basically, our version of East Germany.  David was right there when it started with the anti–Vietnam War movement, where the radicals infiltrated academia, politics, cultural institutions, media, and eventually corporations.  I was there, too, to a lesser extent than David, and I confirm everything he says.  In my own case, I watched in amazement as the mighty Harvard University capitulated to the left after radical students took over University Hall, housing the president’s office.  The strategy was to concede and hope to co-opt the radicals.  In the end, it was Harvard and the establishment that it represents that were co-opted.

I urge you to read David’s account in its entirety.  His first two paragraphs send the basic message, that we have “hit bottom” (my term), so we must recognize that we are “in a war” (his term) so that we can — at last — fight back effectively.

By now it should be obvious — even to conservatives — that we are in a war. It is a conflict that began nearly fifty years ago when the street revolutionaries of the Sixties joined the Democrat Party. Their immediate goal was to help the Communist enemy win the war in Vietnam, but they stayed to expand their influence in the Democrat Party and create the radical force that confronts us today. The war that today’s Democrats are engaged in reflects the values and methods of those radicals. It is a war against us — against individual freedom, against America’s constitutional order, and against the capitalist engine of our prosperity.

Democrat radicals know what they want and where they are going. As a result, they are tactically and organizationally years ahead of patriotic Americans who are only beginning to realize they are in a war. The Democrats’ plan to steal the 2020 election was hatched many years ago when Democrats launched their first attacks on Voter I.D.s, and then every effort to secure the integrity of the electoral system. Those attacks metastasized into an all-out assault on Election Day itself with early- and late-voting grace periods, and a flood of 92 million mail-in ballots, hundreds of thousands of which were delivered in the middle of the night to be counted behind the backs of Republican observers after Election Day had passed.

I rarely recommend readers invest more than two or three minutes in a video.  I find that the message in most videos could be more quickly grasped in print.  But this video by Paul Joseph Watson is very entertainingly and effectively put together, explaining how “They think you’re stupid.”  He focuses on “The Great Reset,” the name the left has chosen for its hiding-in-plain-sight plan to use the coronavirus scamdemic as the excuse the re-order our political economy putting the governments controlled by oligarchs in charge of everything, doling out rewards to a dependent populace.

Watson’s quick cutting between outright admission of The Great Reset and then suppression of mention of it as conspiracy theory is priceless and cannot be equaled in effectiveness by the printed word.

Klaus Schwab, founder of the World Economic Forum, where oligarchs commune with officialdom, is not shy about proclaiming the plan.  He even wrote a book about it: 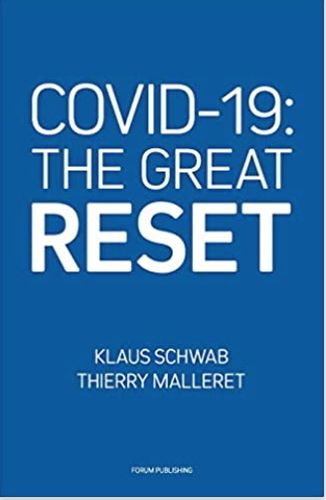 Schwab is taken seriously by the richest and most powerful members of the oligarchy. 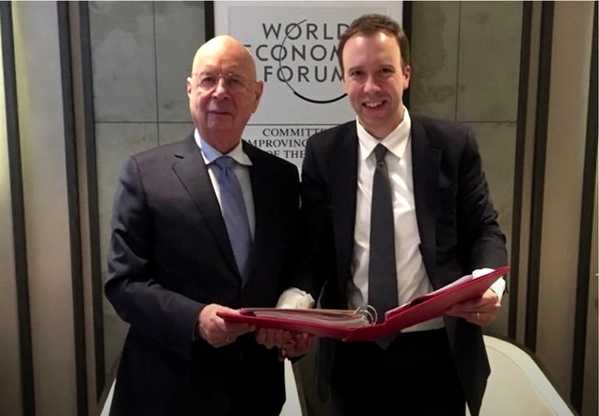 I don’t think he can possibly be a nutjob, a Trekkie with too much power.  But what can I make of his dressing up in a Star Trekkish costume behind a lectern decorated with cultish symbols, rather like a Bond villain?  Is he yanking our chains and glorying in our helplessness?  Remember, “they think you’re stupid.” 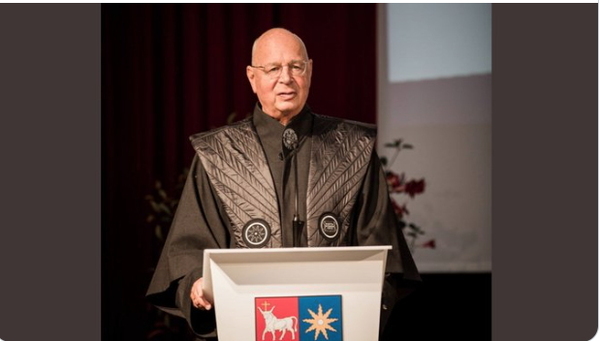 We know what happens to Bond villains in the end.  Maybe my nightmare will have a happy ending when enough of us wake up.