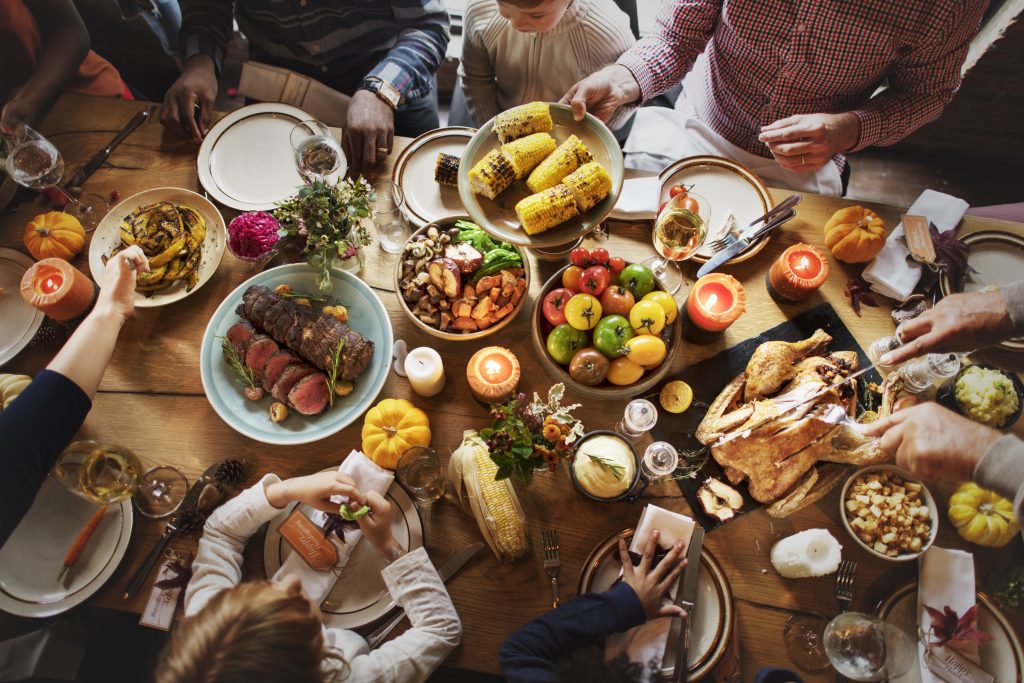 On November 26th my kin will gather in thrice the number our imperious governor has declared legal. Thanks to the Second Amendment and sheriffs subject to elections, we have little concern a phalanx of nanny-staters will barrel up the narrow country road to our secret rendezvous. Likely as not, local authorities will be giving thanks in their own illegal gatherings. We have a tacit consensus in these parts to let the fearful huddle in their governor-approved rump gatherings, nibbling their tofurkey and organic greens, their obliterated cauliflower masquerading as mashed potatoes. As for me and my house, we will crowd around the table for Thanksgiving, and God help any man who tries to stop us.

Representatives from our various houses text Thanksgiving plans in code. They discuss the upcoming funeral for “Tom.” What time will we bury him? Who’s dropping off what side dishes for his bereaved? Will we watch the game once we’ve got him in our stoma—ahem, the grave?

It’s just a bit of fun, we know our governor doesn’t give a damn whether his constituents want to bury our dead any more than he cares what separation does to families. Researchers from the American Academy of Family Physicians estimate our state will see a 68% rise in suicides this year because of despair. Last week our priest was forbidden to give a dying parishioner communion. I doubt our governor gives a damn about these facts, either. Most dead people don’t vote, and he’s got his eye on higher office. As Andrew Cuomo’s Emmy makes clear, the opinion-makers don’t care about the bodies in your wake, they only care that you’re on the right side of COVID history.

I can hear the chattering class already: You’ll be singing a different tune when you all come down with COVID. Our answer, which people who value their own carcasses above all else can never understand, is that there are fates worse than death. And an embarrassing number of you have chosen them.

Other scorners will seek to turn our family gathering into an infringement on their rights. They imagine that if we would all just really burrow into our holes for—What? A month? A season? Another half-year?—the virus will disappear. This is the magical thinking of people who pluck food from grocery-store shelves without considering where it comes from. They fill up their tanks or plug in their electric cars with no thought for who refines the oil, who mines the coal, who trucks the fuel. They have jobs they can do from home, credit cards and savings to float them over the lean months, reliable internet access for their kids to participate in our great national conspiracy to pretend that staring at a screen equals education for—How long was that again? A year? Two years? Until a cure not traceable to Donald J. Trump is found?

And don’t lecture us about loving our neighbors, because you’re holding the wrong end of the pointer. In what way is it loving your neighbor to demand that he imprison himself in his home, forsaking his family and livelihood, until you feel safe? It used to be that the fearful and paranoid would sequester themselves in their houses with shades drawn. Every neighborhood, when I was a boy, had a widow or war veteran like that. Our fathers would mow their yards, our mothers would leave covered meals on their porches, and mothers and fathers alike would whip us with sticks if they caught us trying to peek through a window.

Nowadays the recluses are a voting bloc, so it’s government authorities who prowl private property, peeking through restaurant and church windows to insure we’re compliant. Americans have tolerated this without swinging an axe handle or firing a shot, and while that represents an advance in peacefulness, I’m sure Thomas Jefferson would be ashamed.

I thought about looking on Wikipedia to see how Americans handled Thanksgiving during the Spanish flu. (Are we still allowed to call it that, or has some sterile scientific Newspeak been assigned?) Given how quickly Merriam-Webster’s redefined “sexual preference” during Barrett’s Judiciary Committee hearing, I wouldn’t trust anything I found. Ray Bradbury was prescient on many matters, but in Farenheit 451 he was not imaginative enough. The authorities needn’t burn all the books, they simply have to digitize them and push out historical revisions from the Amazon/Google/NSA mothership.

We’re not facing a disease as deadly and cruel as the Spanish flu, of course, though viewers of CNN might be forgiven for not understanding that. Not that it would matter; my kin—the oldest and most vulnerable especially—would still insist on gathering. Being with family is, to them, worth the risk. Has anyone asked the elderly we’ve warehoused in isolation, these survivors of war and poverty and disease, if they feel the same? Of course not. Their opinions never mattered before—why should they now? It’s all political theater.

My stepfather, decorated special forces combat veteran, contemplated risky surgery last year to address a heart problem. One surgeon told him his odds of survival were 50-50. When I asked if he wouldn’t rather just manage the pain with medication and whiskey, he chuckled. “The places I’ve been in, 50 percent is pretty damn good.”

My Aunt Debbie, getting on in years, refuses to miss Thanksgiving either. She will also refuse to forego her customary tribute, which is a kiss on the face from every child. This woman bathes herself in germs at family events. I remember once some of us kids were riding in the back of her pickup, which was covered by a camper top, and somebody pulled out in front of her. She jammed on the brakes, and we all tumbled to the front of the bed. Then she floored it, sending us rolling in the other direction. Aunt Debbie chased that driver down back-country roads as we kids clattered around like marbles in a clothes dryer. When the other driver finally stopped, he got a blue-streak earful from Debbie about endangering children. It doesn’t make sense if you’re not from around here.

My wife tells me Aunt Debbie called yesterday to confirm we young’uns haven’t lost our nerve with COVID cases on the rise. It’s the residue of a testing surge days before an election predicted to be Republican-heavy at the polls—provided Republicans showed up. Predictably, news outlets talked about nothing but a second COVID wave in the days before November 3rd. If only they’d had something else to discuss, like the tranches of Chinese and Russian money that keep materializing in Hunter Biden’s bank account by accident. A lot of people are afraid, trembling at every leaf-mold sneeze and early-season cold. Our press will stoke those fears so long as it’s profitable to exaggerate the danger of this disease originating in the neighborhood of a Chinese bioresearch facility and remarkably fitted to human transmission but in no way the fault of our soon-to-be good friends again in Beijing.

I ask my wife if Aunt Debbie is worried about the governor’s ban. “I think that makes her more likely to come,” she says. My wife isn’t from these parts, but she’s coming to understand how thickly rebellion runs in our blood.

And this is the crux of it, for me and mine. We’ve each missed a Thanksgiving here or there because of a feud, or jail time, or a bender. It’s not a high and holy holiday for us. But if the cowards who lifted not a finger to deter looters think they can outlaw us, taking away our right to gather as a family on private property, we say what our kind has been saying to their kind for generations: Come and take it.

Tony Woodlief is a writer who lives in North Carolina.