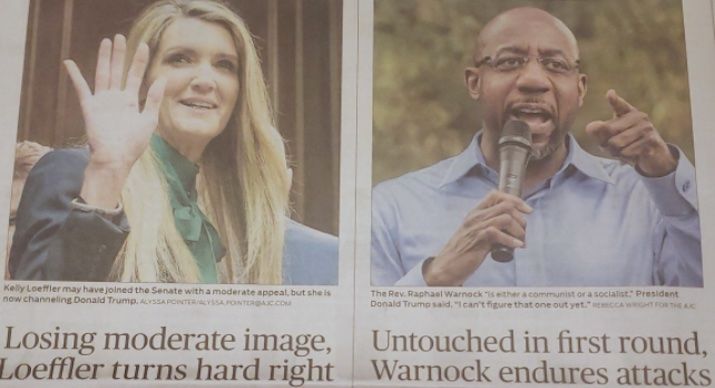 We see lots of examples of media bias against conservatives, especially in campaign coverage. Having an outlet provide such a clear side-by-side example of it for its consumers, however, is pretty rare. Fox News editor David Rutz shared today’s Atlanta Journal-Constitution coverage of the Georgia special election runoff on Twitter, and it’s a picture perfect example of the balance conservatives and Republicans can expect from the mainstream media.

In fact, this isn’t even the worst of it, but we’ll save that for later (via Instapundit):

Ahem. Loeffler is “losing moderate image,” while “Warnock endures attacks”? Warnock has defended radicals like Louis Farrakhan, Jeremiah Wright, and even Fidel Castro, but it’s Loeffler that has an issue with moderate credibility and is tracking toward extremism? Yes, that’s certainly a balanced way for a supposedly neutral media outlet to frame the runoff election with less than two weeks to go — and in the middle of early voting, to boot.

So what could make this worse? The two pieces are reruns, but even that’s not equal. The Loeffler profile has an “updated” tag for December 20th, this past Sunday, although there isn’t any indication when it first ran. The Warnock profile has a date of … October 7th. This turns out to be absolutely false, as the entire victim-lamenting lead focuses on the GOP’s oppo research since the end of the November 3rd general election, but there’s no way of knowing when it was last updated.

They certainly gave him a soft focus to set up the criticisms, an approach that the Loeffler profile eschews. Here’s their first four paragraphs about Loeffler:

When U.S. Sen. Kelly Loeffler took to the makeshift stage at an upscale restaurant in Peachtree Corners, she might as well have channeled President Donald Trump.

She promoted her private-sector business record, tore into Democrats and then spun right into repeating some of the president’s greatest hits.

“I’ve been attacked — but do you know why?” she asked. “It’s because I don’t owe anyone in Washington anything. The swamp, the career politicians and the fake news, they despise strong conservative women. I don’t owe them anything. I’m only here working for you.”

This sort of red-meat pro-Trump speech in the heart of one of Georgia’s most competitive territories wasn’t exactly how the state’s political class envisioned the race a few months ago.

And here’s the first five on Warnock:

The Rev. Raphael Warnock — who had never run for a political office — knew the hits were coming.

So just days after he had secured the most votes in a contentious 21-candidate race for the U.S. Senate, winning a spot in the Jan. 5 runoff against well-financed Republican incumbent Kelly Loeffler, Warnock released an attack ad — against himself.

The effete way he eats pizza with a knife and fork.

His hatred of puppies.

It was funny and deeply ironic. But it offered a warning to Warnock’s supporters and people in the middle that Loeffler was coming.

Or maybe — and I’m just spitballing here — it shows that Warnock was well aware of his radical, hard-left rhetoric and support for Jeremiah Wright and Louis Farrakhan, and hoped to sucker media outlets into sympathetic coverage with that pre-emptive ad. If so, it worked. Brilliantly. But I doubt that Warnock needed to bother, as the AJC seems very comfortable with its own peculiar sense of “balance” in covering elections.