RUSH: I mentioned President Trump’s four-minute video last night from the White House, and how awesome and classically outsider, master class in communication it was. We have 40 seconds of it here that I can share with you to give you an idea of what I’m talking about. 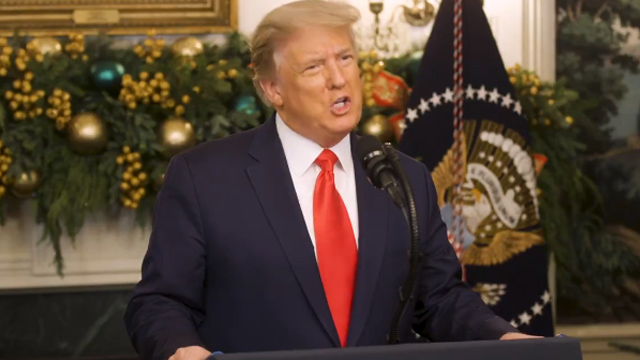 THE PRESIDENT: Congress found plenty of money for foreign countries, lobbies, and special interests, while sending the bare minimum to the American people who need it. I’m asking Congress to amend this bill and increase the ridiculously low $600 to $2,000, or $4,000 for a couple. I’m also asking Congress to immediately get rid of the wasteful and unnecessary items from this legislation and to send me a suitable bill, or else their the next administration will have to deliver a COVID relief package, and maybe that administration will be me and we will get it done.

RUSH: Whooooa. He had to tack that on at the end as though he still may have something up his sleeve. So Trump slammed the so-called COVID relief bill because of all the pork in it. We went through yesterday how much money is in this thing, and it’s actually over $2 trillion because the $900 billion gets added to $1.4 trillion to keep the government up and running, and so the American people get $600 each.

Trump said no way. We gotta up that to $2,000 or $4,000 for a couple. And guess what? Pelosi and the Democrats are welcoming the change! Pelosi, Alexandria Ocasio-Cortez, and even Crazy Bernie are cheering Trump’s call for a $2,000 payment instead of $600. Now, why do you think that is? Now, before you answer, there’s a couple of possibilities of this.

RUSH: Now, politically speaking, Trump goes out and does a four-minute video from the White House, saying (summarize), “To hell with this: $600 for the average American,” while listing all of the pork, all the money going to all these countries for crazy things: $15 million to repair a patrol boat in Sri Lanka and other ridiculous things.

So Pelosi immediately comes out and agrees with Trump. “We need to have $2,000 or $4,000 per couple rather than this measly $600.” Why would she do that? Why would she not come out and criticize Trump for this? Because politically, he crushed her. I guarantee you that I don’t think Pelosi or any other Democrat had the slightest idea that Trump would react this way.

They still don’t know how outsiders think. They still don’t know who Trump really is. They’re not interested in finding out. Trump did what no other Republican managed to do, and he did it brilliantly in four minutes. He showed America who and what Nancy Pelosi and her Democrat colleagues are: Selfish, entitled, uncaring, elitist. Remember who Pelosi is.

Pelosi is the woman we saw standing in front of a $25,000 refrigerator eating gourmet ice cream during the middle of the pandemic, while Biden says the darkest days are ahead of us, while millions of Americans stood in food bank lines because their jobs were shut down because their governors and mayors were shutting them down because of the China virus.

So now there are a number of things that the various supporters of the president are suggesting that he do. Some say he should veto this bill as he threatened to do last night. He did not say he was gonna veto it. He held out the possibility. There’s also the possibility of a pocket veto. Now, the pocket veto is pretty much what it sounds like, and it is a way that the president could prevent this idiocy of a bill from becoming law.

Pocket vetoes don’t happen very much. Congress has to be in the proper parliamentary posture for it to be in play. But that parliamentary posture could very well be existing right now. We could be in those circumstances right now. Under Article I, Section 7 of the Constitution, the president has 10 days (Sundays excluded) to either sign or veto a bill after it has been passed by Congress.

Now, you’ve gotta remember that because of the massive nature of the combo bill, the $900 billion of COVID relief and the $1.4 trillion appropriations bill to keep the government open, the bill has not even been enrolled yet, meaning it has not even been sent to the president. So the 10-day countdown hasn’t begun. Now, here’s where the pocket veto comes into play. 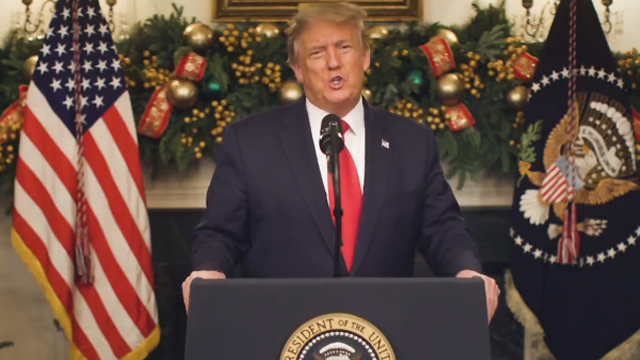 The latest the current congressional session can end is 11:59 a.m. on January 3rd. That’s the drop-dead time for the 116th Congress, this current Congress. That’s when it ends. A president can in effect veto a bill by keeping it in his pocket, by not signing it. He doesn’t have to write “veto” on it. He puts it in his pocket, figuratively speaking, and it just dies there if it comes too close to the end of the congressional adjournment.

Congress must adjourn without a return date specified no later than 11:59 p.m. ET January 3rd. Other words, Congress would have to get the president the bill by today to prevent a pocket veto. If he doesn’t get the bill by today, the president could run out the clock on the current congressional session, which would effectively block any potential override attempt. See, you can override a pocket veto.

If the president doesn’t sign it in 10 days, Congress has to come back, and that would be the killer here. Pelosi would have to call Congress back from their vacations over Christmas to deal with this. The president would have to send it back to Capitol Hill with a veto. If he didn’t do that in 10 days, then the bill would automatically become law.

Now, the president didn’t outright threaten a veto. It’s unclear that the president’s demands could even pass the House and the Senate. But nevertheless, it’s something that a lot of people are recommending simply to… Some people want to inconvenience the Congress, force them to come off their Christmas break to deal with this.

Remember, as I’ve been pointing out, attached to the COVID bill is a $1.4 trillion spending package to fund the government through September 30th next year. If the president vetoes the COVID bill and the $1.4 trillion spending package or if he fails to sign it by December 28, there’s a government shutdown. We still have that to deal with, and the Democrats love when that’s on the table. 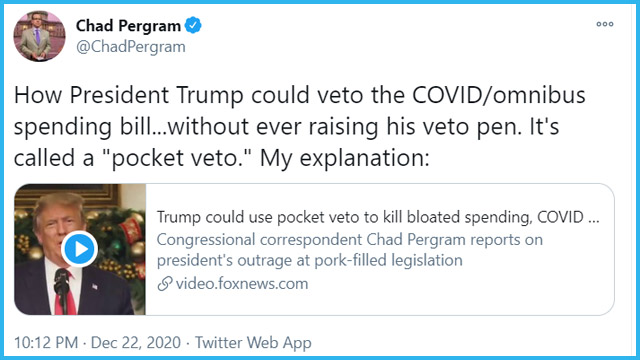 So all of this, as Chad Pergram at Fox News writes, has the potential to get really, really interesting, and there’s any number of ways for the president to deal with this. But last night was classic. Here you have Congress passing one of these typical bailout bills, $600 for the average American. Six hundred dollars is nothing. As one member of Congress said, it won’t even pay 25%…

It was Tulsi Gabbard. This wouldn’t pay 25% of the average rent in my state of Hawaii. So Trump vetoes it and says nothing less than $2,000 — now, possible veto. He rips it, says 600 bucks not nearly enough. We need $2,000 per individual, $4,000 for a couple. In doing this, here’s Donald Trump, the outgoing president, sending a message to the American people who he is.

That even after having been allegedly rejected by the American people, he is still looking out for them, he is still representing them. He is still putting them first. I mean, it would be easy for an outgoing president to say, “I don’t give a damn. I don’t give a damn — 600 bucks, 600 schmucks, whatever I’m gonna do — I’m outta here.” But no, the president made a point, recorded a four-minute video.

It was a master class in communications and did something that I don’t think there’s another Republican on Capitol Hill in the House or Senate who would have done this. But Donald Trump did. He criticized Congress for giving coronavirus relief payments to family members of illegal aliens. They’re gonna get up to $1,800 each, folks, while you get $600.

Trump also pointed out that the bill failed to provide aid to restaurants and small businesses, and that’s another thing we’re gonna get it today.

RUSH: Here is John in Jamestown, North Carolina, as we start on the phones. I’m glad you called, sir. Hi.

CALLER: How are you doing, Rush? 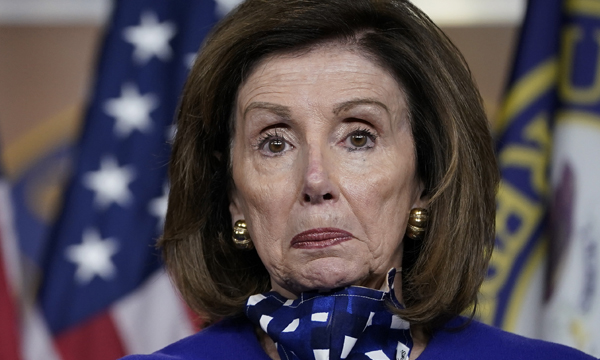 CALLER: First off, it is a total honor to speak with you, sir. I’ve listened for 30 years, and this is the best Christmas present I could have ever asked for, so thank you so much. I wanted to hit on a couple points. It’s interesting that Nancy Pelosi said months back that $1,200 was “crumbs,” but now $600 is pretty good. It drives me nuts that we see this level of hypocrisy and we don’t stop it.

It just continues. It just keeps getting worse. I mean, Trump was spot on in his four-minute speech yesterday, and I hope — whether it be a pocket veto or a flat-on veto — that something is done to shoot this down, because it’s obscene. I mean, you know, $700 million to the Sudan, $10 million to Pakistan, $1.3 billion to Egypt? It’s crazy. It’s crazy, Rush.

RUSH: No, it’s… Well, it is. But the thing is, as I said yesterday, “Welcome to the way things used to be.” This is exactly why we elected Trump, to end this kind of thing, and he did. He ended it. We stopped giving away money, particularly to nations that do not support us. We turned it around. We said to them… Trump turned it around.

You know, here’s the thing. After Trump called on Congress to increase the payments from $600 to $2,000, Pelosi tweeted she agrees with him. Oh, yeah! But then she had to lie and blame Trump for the $600 figure in the first place. Pelosi tweeted last night, “Republicans repeatedly refused to say what amount the President wanted for direct checks. … Democrats are ready to bring this to the Floor this week by unanimous consent. Let’s do it!”

But Trump had offered a COVID relief deal a couple months ago that was twice as large. This is what you… You people probably know it. Trump offered and wanted a $1.8 trillion COVID relief bill, not $900 billion. He wanted $1.8 trillion. He wanted double the amount to go to the American people, and Pelosi and the Democrats said, “Ain’t no way, buddy!

“Not before the election. We’re not giving you this. We’re not gonna let anything happen to show the American people you’re looking out for ’em.” So Pelosi refused, didn’t want any part of it, and now she’s claiming that all of this is Trump’s fault, because Trump wouldn’t specify the amount of direct payment that he wanted. Pelosi turned it down.

She didn’t want to do anything that might help Trump get reelected, and now she’s more than eager to sign on to $2,000, because she is lying and making it look like the reason she didn’t support this amount before the election is that Trump wouldn’t specify it and Congress couldn’t work it out. That’s not it. They weren’t gonna pass anything that would be beneficial to Trump before the election — and, by the way, that’s Politics 101.

They haven’t been looking out for the little guy since vested, moneyed interests led by Big Tech became the bankrollers of the Democrat Party. I mean, it had to be frustrating as hell. Here’s the president trying to do everything he can to help people through this, ’cause he’s dealing with a bunch of blue state governors that are keeping their states locked down, which is preventing an all-out American economic recovery.

It’s being done, he knows, to harm him politically. He knows these Democrats are engaging in policy matters that are designed to harm the country, that are designed to retard the rate of growth of the U.S. economy so that it will redound negatively to Trump so he’ll be blamed for it, and so that the Democrat nominee would benefit. It was all about presidential elective politics.

Pelosi’s not the only one now cheering this $2,000. Chuck You Schumer, Alexandria Ocasio-Cortez, Bernie Sanders.