Having sown the wind, are Democrats reaping the whirlwind? 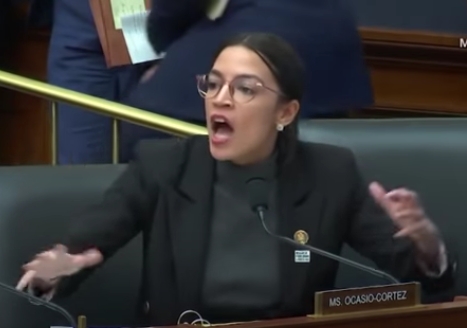 For four interminable years, Democrats sowed discord in America.  Looked at objectively, it wasn’t Trump who was “abnormal.”  He was a colorful character who followed American law and tradition, always for Americans’ benefit.  It was the Democrats whose response was extreme, violent, and abnormal — but the white-collar leaders and fawned upon activists were insulated from the consequences of their actions.  AOC’s hysterical reaction to Ted Cruz’s agreeing with her about GameStop suggests that insulation is over.

Mr. Trump’s candidacy is “extraordinary and precedent-shattering” and “to pretend otherwise is to be disingenuous with readers.”

It would also be an abdication of political journalism’s most solemn duty: to ferret out what the candidates will be like in the most powerful office in the world.

These are the same journalists who buried the story about Biden using his son to collect bribes from Ukraine, China, and quite possibly other countries — and they did so despite first-person documents and witnesses.  They also buried the truth about Biden’s dramatically diminished mental capacity.  Watching a confused Biden repeat an order generated through his earpiece to “salute the Marines” should worry everyone:

That hasn’t stopped the tech companies from propping him up like mad:

Leftists also encouraged political violence.  Sen. Cory Booker told people to go to the Capitol and “get up in the face of some congresspeople.”  Sen. Tim Kaine called on people to engage in street fights with Trump and his supporters.  Former A.G. Loretta Lynch told people to bleed and die in the streets.  Rep. Maxine Waters encouraged people to physically harass anyone from the Trump administration.  Kamala Harris insisted that the violent protests in June should not let up.

This video sums it all up:

The most important video of 2020
pic.twitter.com/3nMNlxl5Q8

Alexandria Ocasio-Cortez was on board with all of this.  Immediately after George Floyd’s overdose death sparked riots, she put up an Instagram post encouraging the riots.  By August, she was insisting that violent rioting was the people’s only option.

When these leftists were encouraging discord and violence, they imagined it against the other.  It never occurred to them that, once you light the fire, you lose control of the direction in which it burns.  Part of why they’ve been playing up events on January 6 is political expediency.  However, part of it is that, having sown the wind, they never expected that they would be the ones reaping the whirlwind.

It’s one thing when you direct people to attack Trump, or Sarah Sanders, or the businesses in Kenosha.  It’s another thing entirely when activists who, way back in November, began plotting to attack the Capitol (ending any claim that Trump “incited” events at the Capitol) actually do reach the Capitol.  And — OMG! — what happens when the Capitol police let them in?

For cowards and bullies like AOC, suddenly, it’s bedwetting time.  A more extreme example of this phenomenon is the way brutal political killers, who love torturing and murdering people, are always the most miserable cowards when the people finally come calling on them.  Lavrentiy Beria could be Exhibit A.

And that gets us to AOC’s response when Ted Cruz was horrified by the way Robinhood and other trading sites for ordinary people responded to Reddit users trying to block predatory hedge funds from destroying GameStop.  It began when AOC said there should be a hearing, and Cruz agreed:

Rather than celebrating the “unity” that Biden robotically demanded during his inaugural oration, AOC attacked, shrieking loud imprecations.  The whirlwind she’d reaped had scared the living daylights out of her:

While you conveniently talk about “moving on,” a second Capitol police officer lost their life yesterday in the still-raging aftermath of the attacks you had a role in.

This isn’t a joke. We need accountability, and that includes a new Senator from Texas.https://t.co/IQ69aZIt3v

While you conveniently talk about “moving on,” a second Capitol police officer lost their life yesterday in the still-raging aftermath of the attacks you had a role in.

This isn’t a joke. We need accountability, and that includes a new Senator from Texas.https://t.co/IQ69aZIt3v

Cruz responded that Democrats are sore winners and are failing on the “unity” front:

Cruz response to @AOC tweet: “You know, there’s a lot of partisan anger and rage on the Democratic side. It’s, it’s not healthy for our country, it’s certainly not conducive of healing or unity, but everyone has to decide how they want to interact with others.” via hill pool

The pea-brained, overwrought AOC, who apparently doesn’t like riots when they’re on her doorstep, went off another rant-rage, which you can see here.

My bet is we’re going to see a lot of insanity as Democrat policies come back to bite the white-collar lefties who have lived lives insulated from the damage they’ve wrought.

As crime escalates because of decarceration, defunded police, no bail, and unconstrained illegal immigration, it’s going to leave the slums and head for the soccer moms’ suburbs.

As mentally ill men who think they’re women get a free pass to women’s locker rooms and bathrooms across America, it’s those soccer moms and their children who will get sexually assaulted.

And when Biden’s insane policies (the attack on fossil fuel, increased minimum wages, unchecked illegal alien flows) raise prices and destroy unskilled and blue-collar jobs, all those minorities who supported him are going to suffer the most.

If the Biden-supporters react as immaturely and hysterically as AOC did, there isn’t going to be enough Valium to calm Blue America down in the coming months and years.