Twitter does not want you to know that the co-founder of BLM just bought a $1.4 million house in an exclusive lily-white neighborhood

Social media censorship is escalating and ever-more blatant. Unfettered knowledge is dangerous to the phony narratives that progressives wish to brainwash the public into accepting, and with social media, the blockade imposed by mainstream media potentially can be breached by people posting otherwise obscure media sources to their social media accounts.

The latest prominent victim is Jason Whitlock, originally a sportswriter but now a social critic who brings insightful commentary on many issues, including race. (For the record, Whitlock is Black, a fact that seems to make a difference to most people on the left.)

Yesterday, Jason Whitlock posted a link to a story about Patrice Cullors and her spouse Janaya Khan (who self-identifies  as “black, queer, and gender-nonconforming”) buying a $1.4 million compound in the Topanga Canyon area of Greater Los Angeles. Mark David broke the story in Dirt.com:

A secluded mini-compound tucked into L.A.’s rustic and semi-remote Topanga Canyon was recently sold for a tad more than $1.4 million to a corporate entity that public records show is controlled by Patrisse Khan-Cullors, 37-year-old social justice visionary and co-founder of the galvanizing and, for some, controversial Black Lives Matter movement.

That’s a sophisticated maneuver, making the purchase in the name of a corporate entity. Too bad there were public records identifying who controlled it. I presume future purchases will use corporations domiciled in the Cayman Islands, or some other haven where the public has less access.

It sounds pretty nice, though not over the top:

A winding 15 minute drive from The Commons at Calabasas and a slightly longer and somewhat less serpentine drive from Malibu’s Getty Villa, the pint-sized compound spans about one-quarter of an acre. The property’s not-quite 2,400 square feet is divided between the a three-bedroom and two-bath main house and a separate one-bed/one-bath apartment capable of hosting guests long term with a private entry and a living room with kitchenette.

Nick Arama of RedState points out:

it’s interesting to note that the demographics of the area are only about 1.4% black people there. So not exactly living up to her creed there.

Remember this is the same woman who confessed that she was a “trained Marxist” buying this expensive pad. Some people are more equal than others.

We should note that grassroots BLM folks have registered a complaint against the leadership including Khan-Cullors because they felt their opinion wasn’t being taken into consideration, they were getting scant money and there wasn’t transparency as to where the money was going.

When Jason Whitlock noted the purchase on his widely followed Twitter account, Jack Dorsey’s minions decided this was too much information.

Last night, Tucker Carlson, who has Whitlock on his show as a frequent guest, took up the suspension: 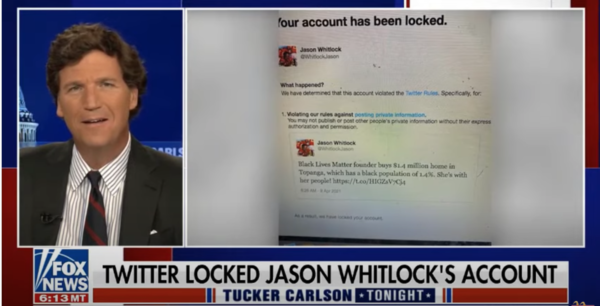 Jason Whitlock, undeterred, responded to critics of his vanished tweet:

Do you even comprehend my take? She had a lot of options on where to live. She chose one of the whitest places in California. She’ll have her pick of white cops and white people to complain about. That’s a choice, bro. https://t.co/rBkOnSjb4u

Ridicule, Alinsky taught us, is the most powerful weapon. I wonder how many of the BLM arsonists out there think it is ridiculous for their founder to hole up in a lily-white retreat in a fancy neighborhood?