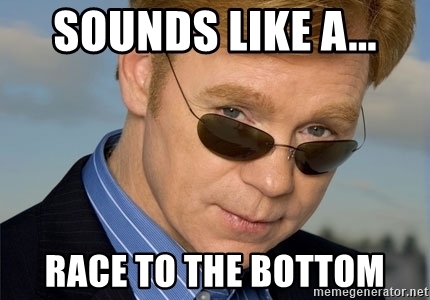 Tech Gate USA has compiled a partial breakdown, by race, of the students offered admission by six of the eight Ivy League schools (all Ivies except Yale and Columbia). The breakdown is only partial because, with the exception of Harvard, the data released by the schools differentiate only between Whites and “persons of color” — an interesting fact, in itself.

The Tech Gate numbers appear to encompass all accepted applicants, including international students. Here they are:

So, depending on one’s point of view, Dartmouth is either winning or losing the race to the bottom.

A few notes on these numbers. First, I don’t know the racial composition of the applicant pool for these colleges. Approximately half of high school students in American these days are White, but White representation among Ivy League applicants may be larger than that.

Second, in most cases, we don’t know what the racial/ethic breakdown is among accepted applicants “of color” at these colleges. If, hypothetically, every accepted applicant of color is Asian, then a high percentage of persons “of color” in the ranks of the admitted probably makes for an exceptionally well-qualified class. Data from the Harvard and Yale litigation show that Asians have somewhat better credentials — grades and test scores — than Whites.

But we know that Blacks and Latinos make up a considerable percentage of persons of color admitted by Ivy League schools. In the case of Harvard, which provided these numbers, 18 percent of admittees are Black and 13 percent are Latino.

We also know from the Yale litigation that the credentials of admitted Blacks and Latinos lag far behind those of Whites and Asians. Thus, the numbers reported by Tech Gate almost certainly reflect the dispensing, to a huge degree, of racial preferences to Blacks and Latinos.

Third, although I found the Tech Gate article a bit confusing on this point, it appears that “person of color” representation among those admitted to Ivy League schools, or at least to Harvard and Princeton, increased this year. This probably means that the amount of racial discrimination also increased.

One would expect this to be the case, given the boost the BLM movement received following the death of George Floyd last May. Harvard’s victory at the district court and appellate levels in a discrimination suit (albeit by rejected Asian applicants), coupled with the Biden administration’s voluntary dismissal of a similar suit against Yale, might also have contributed to the decrease in admission of Whites. Ivy League schools may regard themselves, increasingly, as bullet proof

I suspect that some, if not all Ivies, are competing to see which one can admit the smallest percentage of Whites. That’s the off-the-record view provided by a college admissions counselor.

If so, Harvard will be disappointed to have finished second to Princeton in the competition. But if Harvard survives Supreme Court review in the case referred to above (or avoids review altogether), I expect it to move aggressively to overtake the school’s New Jersey rivals in the race to the top — or, as I see it, to the bottom.