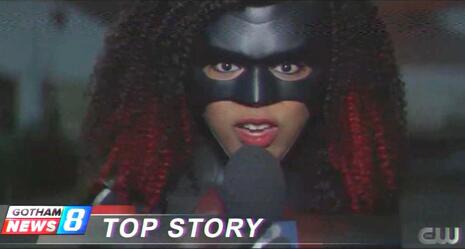 The April 11 episode “Time Off for Good Behavior” has Ryan Wilder/Batwoman (Javicia Leslie) attempting to follow through on those fluffy community promises from the previous episode and assisting a new community center. However, that community center quickly comes under attack by a shooter wielding a lightning gun.

Luckily for Batwoman, a journalist helps the caped crusader tie this attack along with other recent community center attacks to a single source. It turns out the mastermind behind these crimes is the wealthy CEO of a private correctional facility. According to Batwoman’s research, he uses criminals from his prisons to target community centers and rewards them with time off their sentences. The reason he targeted the community centers is because they have successful programs helping at-risk youth. And according to Batwoman, “These programs keep kids from falling through the cracks, but you know who profits from the kids who do? Prisons.”

Sounds like some terrible BLM prison abolition conspiracy theory come to life. And it only gets worse when Batwoman confronts CEO Ellis O’Brien on his crimes.

Ellis: Who’s there? I need a security team down– ahh!

Ryan: Tell me how much money does the city pay you per prisoner?

Ryan: So you’re raking in a couple hundred million a year to warehouse people?

Ellis: There’s nothing illegal about it.

Ryan: That’s the problem. All that money means you’ll be willing to do anything to keep your cells filled. That’s why you sent Kilovolt to fry the community center. Any programs that kept at-risk kids from ending up in one of your prisons cut into your bottom line, so you took them out.

Ellis: All right, all right. You got me. No need to get physical.

Fortunately, he’s later arrested, so justice is served, except for the fact that this is a nonsensical argument for the BLM goal of abolishing prisons. If you’re forced to resort to insane conspiracy theories to have the moral high ground, then perhaps you’re not as right as you think.

Speaking of not being right, the episode also spews anti-gun rhetoric as Batwoman also tracks down members of a gang known as the False Face Society. She’s able to acquire six names and finds a common trait, noting: “They manage the Gotham gun club. Is it that hard to imagine guys who work at a shooting range pulling the trigger?” Unfortunately, when the authorities arrive to interrogate the men, all they find are their bodies hanging at their shooting range, presumably to cover any tracks.

So, now not only are private prisons evil, but private gun owners as well. At this point, it seems like Batwoman battles more imaginary bad guys than real ones, and I’m not talking about the Joker.

Conservatives Fight Back: This show was sponsored by commercials from Charmin, Progressive, and Subaru – tell them how you feel about their sponsorship of such a racially divisive program!