Facing the Facts of War with Russia 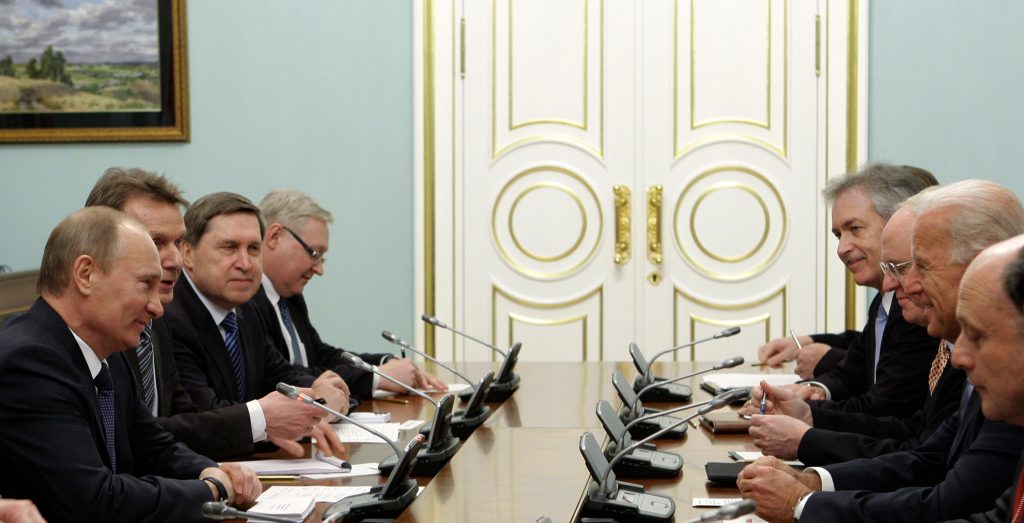 The Biden administration appears willing to get us into a fight we’re not ready for.

Conflict with Russia may be inevitable. Kiev’s strident threats to resolve the crisis in Eastern Ukraine with force of arms, combined with Washington’s refusal to acknowledge that Moscow actually has legitimate national security interests in Eastern Ukraine, makes it so. Equally troubling, the president sees no particular reason why he should explain to the American people why Washington’s readiness to support Kiev’s use of force against Russia makes strategic sense for America.

In 1937, when the Imperial Japanese government expressed sincere regret for attacking and sinking the U.S.S. Panay, an American gunboat that had been patrolling China’s Yangtze River, U.S. Ambassador to Japan Joseph Grew was not satisfied. He warned the Japanese Foreign Ministry that “Facts mean more than Statements.”

Grew was right. A Biden-Harris guarantee of support for the Ukrainian government’s plan to reconquer its lost territories, including Luhansk, Donetsk, or Crimea, is about as meaningless as the British government’s 1939 guarantee of assistance to the Poles in the event of a German attack on Poland.

In 1937, President Franklin D. Roosevelt decided not to retaliate against the Japanese. FDR knew there was no public support in the United States for a war with Japan or any other great power. FDR also resisted pressure from the U.S. Navy’s admirals to retaliate because he knew America’s armed forces were not ready for a full-scale war. As for our British friends, they were not ready to weaken their fleet in the Atlantic to join a fight against Japan when the threat of war with Germany was growing.

It is easy for presidents to moralize and posture in public about matters thousands of miles from America’s borders when it currently costs nothing in terms of American blood. Unfortunately, this condition won’t last. Fighting in Eastern Ukraine will produce heavy casualties on both sides. Russian and Ukrainian soldiers are courageous, intelligent, and ruthless. None of them are “woke.” All are motivated by patriotism, ingrained discipline, and a strong professional military ethos.

Because the Russian military is larger and better armed, the most likely outcome is a Russian victory. Moscow is then likely to direct its forces to swallow Ukraine’s territory east of the Dnieper River making matters far worse for Kiev. As Angela Merkel observed in 2015, Putin is confident that the battle in Eastern Ukraine is one that he can definitely win.

If Russian military power prevails, President Biden’s promise of support means U.S. or Allied NATO air or ground forces may intervene to rescue the Ukrainians from defeat. In Europe, U.S. Army and Marine ground forces are too weak to intervene 500 miles east of the Polish border, even if reinforced in a timely manner by armored brigades. None of NATO’s ground forces are ready to cope with Russia’s BM-30 SMERCH Rocket Artillery Formations. Rockets fired from just five of Russia’s BM-30 SMERCH rocket launchers can devastate an area the size of New York City’s Central Park (843 acres, or 3.2 square miles) in minutes.

Thus, if U.S. and allied forces do intervene, they are likely to do so with air assets. How effective Russian integrated air defenses will be is unknown, but it would be ill-advised to underestimate the impact of Russian IADs with phased array radars. Some of the newest air defense systems—like the Russian S-500—are so capable that many U.S. Defense officials privately worry that even warplanes like the F-22, F-35, and the B-2 risk destruction if they attempt to penetrate them.

Since prevailing winds in Eastern Europe would spread nuclear fallout across Russia and Central Asia all the way to Korea, the Russian use of nuclear weapons is very unlikely—unless of course, U.S. forces use so-called “tactical nuclear weapons,” which would trigger Russian escalation to the strategic nuclear level with ominous consequences for planet Earth. However, virtually all U.S. and allied military installations, from Estonia to Spain, will be within range of Russian Kalibr Cruise Missiles carrying 1,000 pound, high explosive, conventional warheads.

President Biden’s apparent guarantee of U.S. support to Ukraine’s president suggests he’s also drinking deeply from the poison well of failed American statecraft and generalship, a wellspring of uncreative minds with no appreciation for real warfare. Twenty years of desultory battles against weak opponents (insurgents without armies, air forces, and air defenses) has not elevated much warfighting talent to the senior ranks of the armed forces to cope with a radically changed warfighting environment.

Equally serious is America’s deteriorating societal cohesion, which was on full display during the summer of 2020. When added to the dramatic spike in illegal human and drug trafficking pouring across the southern border, it seems certain that a major war in Eastern Europe would expose not only serious vulnerabilities in the U.S. armed forces, but the fragility of American society to the whole world.

It is worth remembering that when the Trump administration’s hawkish advisors and secretaries of State and Defense urged military action that threatened conflict with Iran in 2019, President Trump just said, “No.” Today, it appears that strategy sessions in the White House are little more than a façade behind which wish-based, “woke” ideology dominates discussions. The implication is there is no adult present in the Oval Office capable of just saying “No.”

In 1937, FDR was the adult in the Oval Office who understood that American public opinion exacts obedience. He knew the enormous demands war would place on America’s economy and its armed forces during a Depression. For FDR, these realities made military retaliation against Japan impossible.

Unlike FDR then, now Biden, Harris, and their “woke” advisors are throwing caution to the wind. Whether they realize it or not, they are also playing with the survival of their own administration.

Douglas Macgregor, Col. (ret.) is a senior fellow with The American Conservative, the former advisor to the secretary of Defense in the Trump administration, a decorated combat veteran, and the author of five books.