Mighty White of You

Kevin Williamson has made quite a name for himself. In an era of partisan lining-up, Williamson has the rare distinction of making both sides want to line him up. On the right, his style used to be good partisan fun, like his articles for National Review during the 2012 election praising Mitt Romney (“When it comes to being a rich guy, Mitt Romney should own it”) and criticizing Barack Obama (“The offspring of rich families are statistically biased in favor of sons … Professor Obama? Two daughters. May as well give the guy a cardigan. And fallopian tubes”).

But Willamson, like his magazine, was revolted by the rise of Donald Trump. “The white American underclass is in thrall to a vicious, selfish culture whose main products are misery and used heroin needles,” Williamson wrote in a notorious article for NR in 2016, “The White Working Class’s Dysfunction.” “Donald Trump’s speeches make them feel good,” he wrote. “So does OxyContin.”

Williamson begins that article by attacking Michael Brendan Dougherty, formerly of TAC. Five years later, the attack makes ironic reading: “Dougherty spends a great deal of time lambasting the conservative movement and its organs, from which he feels, for whatever reason, estranged — an alienation that carries with it more than a little to suggest that it is somewhat personal.” “Somewhat personal” is how many see Williamson’s own writing on the white working class.

Williamson is NR’s “roving correspondent,” indicating, correctly, a bad boy status outside the magazine’s more stuffy reputation. It’s unclear whether William F. Buckley would ever have hired a male writer who’s been seen sporting an earring or leather jackets and party shirts. Aesthetics aside, Williamson earns his Thompsonian perch by being at least one thing: unafraid. In our age of “empathy,” Williamson is a dissenter. He is gruff, essentially pitiless, and is not giving up on being deeply provocative.

He doubles down on his provocative thesis about poor whites in his newest dispatch, Big White Ghetto, essentially reprinting parts of his infamous column: “Nothing happened to them,” Williamson writes. “That was the great shock for me… Nothing happened. There wasn’t some awful disaster. There wasn’t a war or a famine or a plague or a foreign occupation. Even the economic changes of the past few decades do very little to explain the dysfunction and negligence—and the absolute incomprehensible malice—of poor white America.”

“So, the gypsum business in Garbutt ain’t what it used to be,” Williamson continues. “There is more to life in the twenty-first century than wallboard and cheap sentimentality about how The Man closed the factories down.”

Williamson doesn’t so much have policy prescriptions as he has an understanding of power, self-interest, and work ethic. Again and again, he emphasizes that it is Americans who are making most of the destructive decisions, not their leaders. “Governor Reagan may have signed that original no-fault divorce law way back when, but nobody put a gun to anybody’s head. The American family died because Americans killed it, and they killed it because they didn’t want it.”

Williamson is clear why he’s being so mean: Other people on the right, including Donald Trump’s apologists, are selling a fib. “It is immoral because it perpetuates a lie that is destroying people’s lives: that the white working class that finds itself attracted to Trump has been victimized by outside forces. It hasn’t.” This is the most empathetic passage in the book, showing that Williamson of course cares about these people and their messed-up lives.

The only thing that seems to elicit any enthusiasm from downtrodden white Americans these days, Williamson says, is vice. Cannabis will one day be legal in all 50 states, the least bad option, but for now it’s big business mostly in the West. “The Colorado marijuana business is in its 1963 Las Vegas-casino period,” Williamson writes. But the joke’s on the hippie-dippie user base, the enthusiastic politicians over their skis for the ventures, and the old-guard drug dealers (many, of course, from the working classes of all races). Legalization has one end game: Corporate America is going to win.

Stretching the Vegas metaphor, Williamson says: “The vice itself has been legalized, the Chamber of Commerce is deploying in force, and the organized-crime tough guys are about to find out what ruthlessness, iron will, and intense singularity of purpose really mean as the publicly traded multinational corporations take over their rackets and hand them their heads. You think you’re a gangster? Try picking a fight with Walt Disney.” 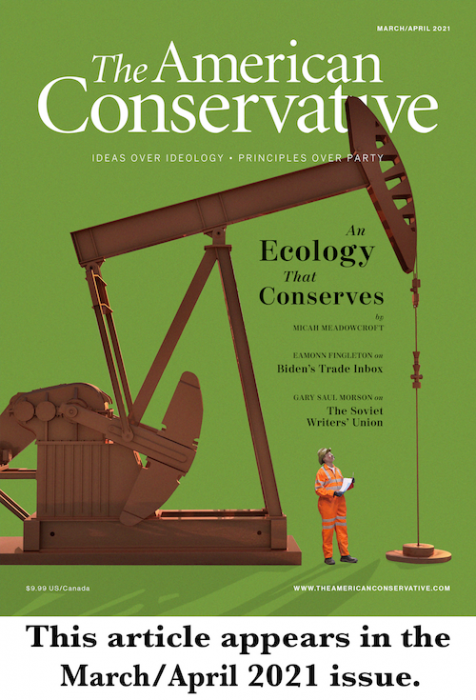 At times Williamson’s reports can read like Chris Hedges, the socialist former New York Times correspondent who parted ways with the paper over his loud protests against the war in Iraq. “A modern Jeremiah sees national decline everywhere he looks,” is how his old paper described Hedges’s latest book, America: The Farewell Tour, which takes its author on a cross-country tour similar to Williamson’s, from the porn studio inside the San Francisco Armory to the ruins of Trump Taj Mahal in Atlantic City. Hedges and Williamson both say these kinds of things are pretty bad, but whereas Hedges sees behind them something approximating an international conspiracy by the “corporate state,” if anything Williamson would regard the “corporate state,” to the extent it exists, as one of the few things in America that actually works.

What Williamson doesn’t address: that millions of Americans are bored out of their minds and miserable in corporate jobs, including what remains of the industrial ones; that deindustrialization and “free trade” were choices by our leaders, debated and favored by the capitalist fanatics; that American schools are now disseminating ludicrous, actually racist anti-white propaganda, a phenomenon never more turbocharged than in the year of the publication of Big White Ghetto.

Williamson’s reporting and analysis is at times so compelling that the reader cries out for the man to be a little more empathetic with those he grew up with, to try and meet those who would reform our system halfway, including those reformers who were more tolerant of Trump than Williamson himself was. But I’m getting that wouldn’t be Kevin’s style.