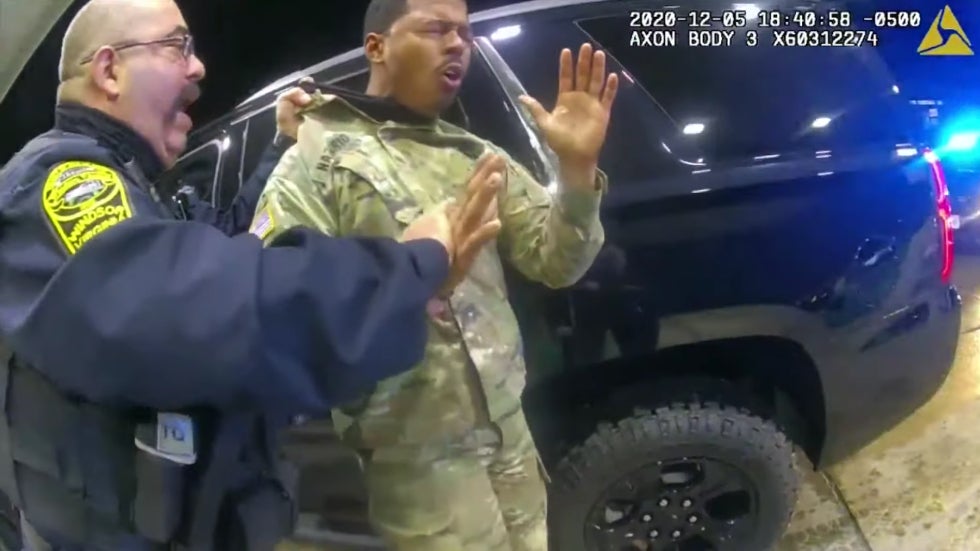 A Windsor, Va., police officer who pepper-sprayed an Army officer during a traffic stop last year has been fired, the Windsor Police Department announced on Sunday.

Joe Gutierrez was one of the two Windsor police officers caught on camera pointing their guns at Caron Nazario, a second lieutenant in the Army, at a traffic stop at a gas station in December.

In body camera video shared online by The Associated Press, Gutierrez is also seen pepper-spraying Nazario multiple times, after one of the officers attempted to open his car door.

In a statement released on Sunday, the Windsor Police Department said it conducted an investigation into Gutierrez’s use of force, which determined that department policy “was not followed.”

“At the conclusion of this investigation, it was determined that Windsor Police Department policy was not followed,” the department wrote in a statement.

“This resulted in disciplinary action, and department-wide requirements for additional training were implemented beginning in January and continue up to the present. Since that time, Officer Gutierrez was also terminated from his employment,” the department added.

Earlier this month, Nazario filed a lawsuit arguing that the officers violated his constitutional rights during a traffic stop in the southeastern town of Windsor, located about 46 miles west of Virginia Beach.

In the statement, the Windsor Police Department said it has “openly provided documents and related video to attorneys for Lt. Nazario.”

Additionally, the city officials said they requested an investigation of the event by Virginia State Police.

Virginia Gov. Ralph Northam (D) announced earlier Sunday that he is directing Virginia State Police to conduct an independent investigation into the traffic stop and use of force.

Video from The AP shows Nazario, who is Black and Latino, sitting in his parked car at a gas station, dressed in uniform, with his hands up, as the two officers point their guns at him.

The officers were captured on video ordering Nazario to exit his vehicle, to which he responds “I’m honestly afraid to get out.”

“Yeah, you should be, get out!” one of the officers can be heard responding.

The other officer, Daniel Crocker had radioed the station earlier saying he was trying to pull over a vehicle with tinted windows that appeared to not have a rear license plate, according to the AP. He called the situation a “high-risk traffic stop,” and said the driver was “eluding police.”

Nazario, however, said he was not trying to escape the officer on his drive home from his duty station, but instead wanted to stop in a well-lit area “for officer safety and out of respect for the officers.”

In the lawsuit, Nazario said that once the officers arrived at the gas station his rear license plate was clearly visible, but the officers still immediately drew their guns and pointed them at Nazario.