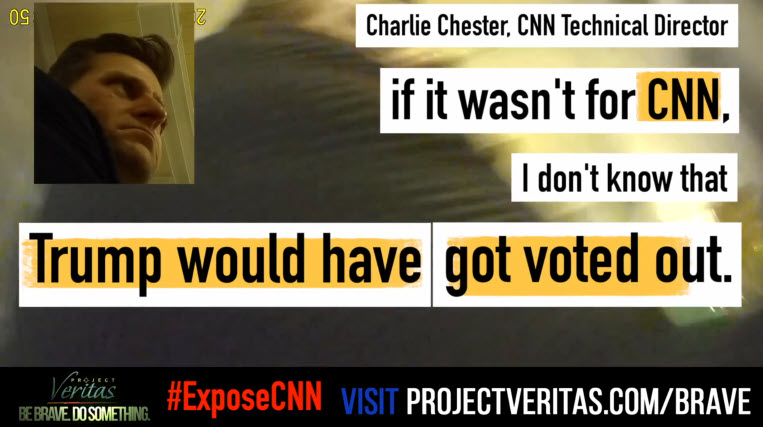 Every conservative who’s ever watched CNN has known with certainty that the media outlet is acting as a propaganda arm of the Democrat party. However, when we point that out, we get gaslighted. We’re told that we’re paranoid, that we can’t distinguish facts from our delusions, and that we’re sore losers. That’s why conservatives reveled in Tuesday’s Project Veritas video drop because it vindicated them completely. Charlie Chester, CNN Technical Director, openly revels in the network’s “propaganda” to “get Trump out of office.”

Sadly, when CNN talks, people still listen. The mere fact that Joe Biden is in the White House, despite a storied career of lies, plagiarism, vulgarity, viciousness, creepiness, and continuously bad foreign policy decisions, tells you that the people who voted for him (and there were real, legal voters who did vote for him) were on the receiving end of some heavy-duty indoctrination.

Thanks to Project Veritas’s efforts, we finally have confirmation that CNN deliberately engaged in this indoctrination. Here are just a few statements from Chester that will give you a feel for the video, even if you can’t or don’t want to watch it (emphasis mine):

“[Trump’s] hand was shaking or whatever, I think. We brought in so many medical people to tell a story that was all speculation — that he was neurologically damaged, and he was losing it. He’s unfit to — you know, whatever. We were creating a story there that we didn’t know anything about. That’s what — I think that’s propaganda.”

I think there’s a COVID fatigue. So, like whenever a new story comes up, they’re [CNN’s] going to latch onto it. They’ve already announced in our office that once the public is — will be open to it — we’re going to start focusing mainly on climate.”

“It [COVID] will taper off to a point that it’s not a problem anymore. Climate change can take years, so they’ll [CNN will] probably be able to milk that quite a bit…Climate change is going to be the next COVID thing for CNN…Fear sells.”

By the way, if you’ve only seen the two-minute-long promotional video, you haven’t seen the video at all. You must watch this full version if only to hear what he says about Kamala Harris:

If we had men (or, I guess, women) with chests in political office or the Republican Party, they would take this video and say that every bit of CNN’s political coverage for the four years preceding the election was a donation in kind, first to the Democrat party, generally, and then to Biden, specifically. That is, CNN was not relaying news in the traditional sense of useful, fairly objective information. It was selling a political product and doing so by fraudulently claiming to be a news outlet.

We live in a world of men without chests, though. It’s up to you. The first thing you should do is remember that, the next time you watch anyone from CNN spewing their vile bile at you or any Republican or conservative politician, you are not watching a news agency. Per one of CNN’s own high-level employees, it is a “propaganda” outlet that worked hard to provide free advertising for Joe Biden and to denigrate Trump and, of course, you.

Also, be sure to remember that the network’s promised pivot to the climate change agenda, which is already embodied in fervent support for Biden’s misleadingly named “infrastructure bill,” is part of the next wave of leftist propaganda. Treat it accordingly. And if your leftist friends insist you’re paranoid not to believe CNN, be sure to have the link handy for this Project Veritas video.