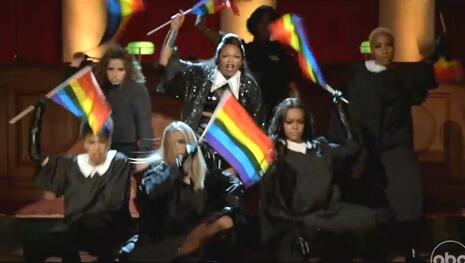 Last week, ABC’s new R&B drama Queens referred to an unborn child as a “baby” five times in one episode, despite the baby being targeted for abortion. This week, they promoted a pro-abortion agenda that was critical of Texas’s attempt to protect such babies, accusing the state of being full of sexists. They also touched on the left’s two other favorite topics – LGBTQ pride and race-baiting, claiming George Floyd has been “forgotten.”

On Tuesday’s episode, “Behind the Throne,” the queens are making a music video for the first time since reviving their ‘90s R&B girls group. The show’s writers decided this was a good opportunity for woke liberal lecturing, using the rap lyrics to promote their agenda. Not only do they repeat the pro-abortion lyrics twice in the two-minute song, but they also had Brianna (Eve) sing them in rehearsal halfway through the show:

Brianna: They say things are bigger in Texas ♪ So is the sexists ♪ It’s true indeed ♪ Without a queen you wouldn’t exist ♪ Mama bear and my babies are my blessin’s ♪ As a defendant my testimony is let’s give ♪ The women back they voices, vote for pro-choices ♪ My body, my rules, you can’t avoid this ♪ So it’s a mistrial, now you under arraignment ♪ Judge and the jury, no statute of limitations ♪

Jill: ♪ Come on, my pride is alive ♪ Don’t try to decide how I feel inside ♪ Step in my chambers, you witnessin’ ♪ Women on the rise ♪ Persecute us for our choices, try to silence our voices ♪ “L” is for the love we give, and you should join us ♪ “G” is for greatness “B” is for Bein’ who you are “T” is for your transition ♪ Now go and be a star ♪ “Q” is for us not Bein’ quiet ♪ It’s our turn to let the flag fly free ♪ Case closed, court is adjourned ♪

Naomi: ♪ Say her name, say her name, say her name ♪ They say the fruit is rotten ’cause it’s strange ♪ George Floyd forgotten, no, he didn’t die in vain ♪ And, no, your little verdict isn’t what we call change ♪ There’ll be no acquittal for the suffering and pain ♪ Video shows he’s unarmed, but you still take aim ♪ That’s why we scream, “No justice and no peace!” ♪ And no more black bodies spillin’ blood ♪ On the cold world’s concrete ♪

All: ♪ I made you, a queen is what you call me ♪

Lauren: ♪ So, Your Honor, let me tell you how my story went ♪ I used to wanna party till the party ended ♪ I watched everyone ignore me, I went undefended ♪ But they don’t know my story, they just wanna pretend it ♪ I give 100% and you all could bet me ♪ They’ve been sleeping on me since ♪ They got narcolepsy ♪ I’ve been peeping all my friends, shoot a target at me ♪ I’m just sitting on this bench, may the law protect me ♪ I’m a queen ♪

All: ♪ Supreme is the Queens when we come through ♪ ♪ Ladies gotta do it how they want to ♪ My body, my choice, you don’t own me ♪

Umm…who has forgotten George Floyd? And I’d say the guilty verdict in that case was hardly “little.” But because there are situations where white officers have been forced to use a weapon to protect themselves and the public in very dangerous and difficult circumstances involving black suspects, there’s supposedly no justice, so there will be no peace? What a terrible, divisive message to send at a time of year when we celebrate peace on earth the most.

And how can anyone, especially an actress who is pregnant in real life as Eve is, rap about being a mama bear whose babies are a blessing to her in one breath, while promoting abortion that takes the life of those blessings in the next?

If anyone’s been forgotten, it’s unborn children. It’s their lives that are truly at risk, so they are the ones who need justice and protection. Especially when abortion giant Planned Parenthood was founded by a racist eugenicist to end the lives of black babies and other people they considered “undesirables.” Yet Queens gave them free advertising in last week’s episode. That’s liberal logic for you.

Conservatives Fight Back! This episode was sponsored by Target, Walmart, and T-Mobile. Click each advertiser for their contact information so you can let them know how you feel about this storyline.