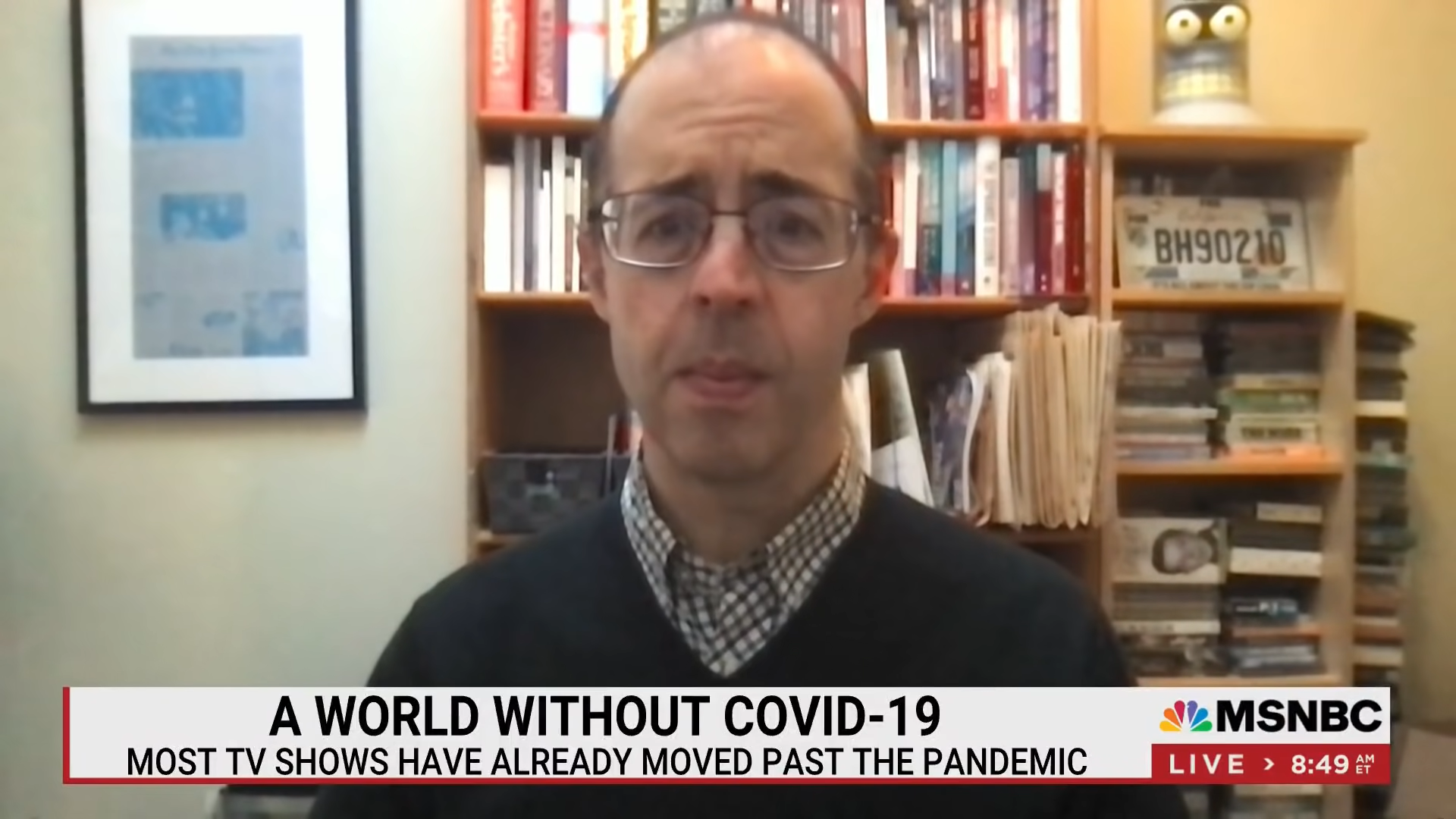 Next time some leftist on cable news or in the national papers makes one of those trite declarations about how, “We’re all trying to get past this pandemic, but…,” or, “No one likes wearing a mask, but…” just think back to what New York Times TV critic James Poniewozik said this month.

Poniewozik (yes, that’s a real name) was a guest Monday on MSNBC to discuss the great level of discomfort he feels watching fictional television shows that — get this — don’t accurately portray his own obsession with COVID-19.

There was, he said, an “unsettling phenomenon where shows are sort of taking the standpoint of, ‘okay, in the world of our show, the pandemic did happen, and it existed and it was a real thing and it was a big deal, but now it’s over. It somehow got fixed, yada, yada, yada and the rest of you are sort of out on your own.” He said the dearth of virus-related references in TV dramas “often ends up being kind of a more unsettling thing than never acknowledging the pandemic in the first place.”

Show writers and producers who, like many of us, felt it was time to move on from the pandemic, apparently left Poniewozik feeling left behind. “There is this sort of, you know, cognitive dissonance that you get now,” he said, “where you see an example of a show like ‘Grey’s Anatomy’ do a season that, you know, on a medical show, is set within the pandemic … and then it comes back and it’s sort of, well, we’ve kind of done this long enough, we are now in a post-pandemic reality, good luck to the rest of you.”

Don’t tell me these people haven’t enjoyed waking up every single day thinking about what mask they’ll wear, what public events they’ll choose not to attend, and what form of fun they can denounce for not being COVID-sensitive enough.

There’s a lot of psychological study to be done on the pandemic-era liberals, which will hopefully explain their neurosis, but just know that their mentality and what they want isn’t only annoying. It’s wrecking our society.

To be hung up on COVID, which is deadly to a very small fragment of the population (like less than 1 percent), and demand that everyone else obsess over it, too, is to put the brakes on the progress of mankind altogether.

No in-person school for children, resulting in stunted development. No gatherings for professionals, meaning less intellectual collaboration. No fun, even in entertainment media, leading to yet more depression, anxiety, and isolation.

But they swear! This is just for now! Nobody wants this! Let’s just try to be a little more sensitive!

It has long been obvious that all of that is a lie. This isn’t just “for now,” a period of time that has stretched on for nearly two years and counting. They do want this, as they’ve admitted time and time again, because it means they get to micromanage everything you do. And it has nothing to do with being “sensitive” — it’s about being compliant.

For people like Poniewozik, moving on from the pandemic is “unsettling.” For the rest of us, staying there with him and his friends is even worse. Yada, yada, yada, good luck to them.

Eddie Scarry is the D.C. columnist at The Federalist and author of “Privileged Victims: How America’s Culture Fascists Hijacked the Country and Elevated Its Worst People.”