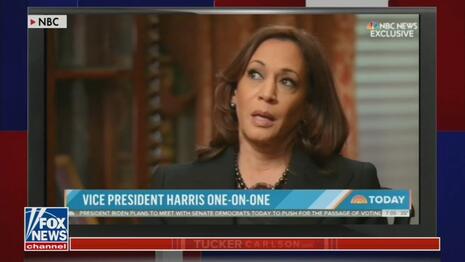 Between Joe Biden’s ranting Atlanta speech and Kamala Harris’s bumbling interview with Craig Melvin on NBC, the White House had a terrible week…even though the liberal TV networks energetically promoted their failing arguments. Biden was comparing those who won’t pass his “voting rights” bills — or refusing to abandon the filibuster — to segregationists like George Wallace and Bull Connor. That includes Republicans and Democrats. Never-Trumper Matt Lewis at the Daily Beast complained this was a “Unity Fail.”

Kyle Drennen joins in to discuss how Melvin’s interview with Kamala Harris was tougher (and weirder) than expected. When Melvin asked if it was time to change COVID strategies, she oddly replied “It is time for us to do what we have been doing, and that time is every day.”

We also discuss the Republican National Committee talking tough about how they might not play ball in 2024 with the Commission on Presidential Debates. Republicans are tired of being stuck with liberal-media moderators and their phony “town hall” debates with pre-screened questions tilting toward the left. It’s a good time to question the media’s performance on this most important stage.

Enjoy the podcast below or wherever you listen to podcasts.