On the filibuster, Kyrsten Sinema and Joe Manchin came through in the crunch

On the filibuster, Kyrsten Sinema and Joe Manchin came through in the crunch – American Thinker

Almost a year ago, Senate minority leader Mitch McConnell agreed with majority leader Chuck Schumer to an equal power-sharing agreement for the upcoming session, reflecting the 50-50 split between the parties (with Kamala Harris as the tie-breaking vote).  In exchange, McConnell agreed to allow the question of the filibuster’s continued existence to be brought up to a vote.  He did so because Senators Joe Manchin and Kyrsten Sinema promised not to end the filibuster.  That was an incredible gamble, but, on Thursday, Manchin and Sinema came through on a filibuster vote.  A furious Biden started hollering about the horrors of life without federalizing American elections and made it clear that Democrats will keep coming back.

I must admit that I was dubious that either Manchin or Sinema would keep the promise to protect the filibuster.  I was certain they’d find a reason to go back on their word and end the 216-year-old procedural device that blocks a minute majority (such as the Democrats’ majority thanks only to Harris’s vote) from running away with legislation.  But they didn’t.  If I were in the room with them, I’d apologize for doubting them.

After explaining why she supports the “For the People Act” (and she’s completely wrong on that, as I discuss briefly, below), Sinema elegantly explained why she would not vote to end the filibuster:

I will not support separate actions that worsen the underlying disease of division infecting our country.

American politics are cyclical and the granting of power in Washington, D.C. is exchanged regularly by the voters from one party to another.

But what is the legislative filibuster other than a tool that requires new federal policy to be broadly supported by Senators representing a broader cross-section of Americans — a guardrail, inevitably viewed as an obstacle by whoever holds the Senate majority, but which in reality ensures that millions of Americans represented by the minority party have a voice in the process?

In contrast to Sinema’s thoughtful speech explaining that doing away with the filibuster will unduly strain America as small majorities attempt to impose huge changes on a divided nation, Biden went in seconds from talking about taking a second bite at the “voting rights” bill to yelling maniacally about the need for the bill.

To understand how wrong he and Sinema are, you need to know that the Democrats are painting their “For the People Act” as the second coming of the 1964 Civil Rights Act.  The 1964 Act removed legal barriers solely intended to prevent Blacks from voting or participating in all areas of public and private life across the Democrat-run South.

The “For The People Act,” by contrast, targets state laws seeking to end election fraud.  They require voter identification (something Blacks overwhelmingly support); cleaned up voter rolls (which are riddled with fraud); and the end of ballot-harvesting, drop-boxes, and mail-in voting, all of which encourage election fraud.  Most of them increase access to the polls, whether with longer hours or more days in which to vote.  (By the way, more days are a terrible idea because early voters miss pivotal late-revealed information about a candidate or issue.)

All of these initiatives increase the potential for election fraud, diluting citizens’ right to vote, something that affects people regardless of color, race, country of national origin, or sex (real or imaginary).  Given how unpopular Biden and the Democrat agenda are, Democrats fear actual votes, rather than the ones they print themselves.  The For the People Act is a last-ditch effort, along with trying to disqualify Republican candidates, to maintain permanent power rather than allow voters to kick them to the curb.

You can understand, therefore, why ol’ Joe is frustrated and angry.  Here, he shows his typical, overly dramatic bull-fecal-matter approach to things, as he hollers at the assembled reporters:

If you look past the yelling, you’ll notice something interesting: Biden keeps talking about the Act being important to control “who counts the vote.”  In fact, the Act is not about who counts the vote, but about who votes.  If it passes, it will ensure that anyone, citizen or not, registered or not, alive or not, gets to vote for the Democrats.

It sure is interesting, though, that Biden got stuck on the phrase “who counts the vote.”  After all, that’s always been a concern of corrupt and tyrannical politicians.  In the old days of New York’s Tammany Hall, Boss Tweed knew the score: 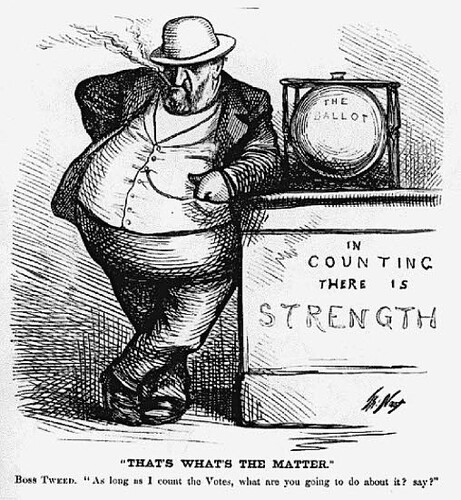 And of course, Stalin is reputed to have said, “Those who vote decide nothing.  Those who count the vote decide everything.”

If you experience technical problems, please write to helpdesk@americanthinker.com